1. Concerns about the environment have somehow come back into vogue. Maybe they were first prompted by Al Gore’s An Inconvenient Truth. Perhaps it was last year’s sudden rise in oil prices. There is now an ongoing overdose of information on global warming. We can speculate endlessly on the sources (including of course, “reality”!). The key point for this article is that public concern about the environmental impact of all industries, including printing, is fast rising, and this will have a significant impact on the future of publishing.

2. The environmental impact of printing ink on paper is being singled out by many groups, whether justified by the facts or not. Three years ago the issue played out like small wildfires in distant forests. Today the unmistakable trend is that paying heed to environmental concerns related to printing has become a major priority for many readers, publishers and the vendors that serve them.

3. In response to these concerns, large and small companies are beginning to take concrete direct action. Quite apart from the beneficial impact of these actions, the publicity that surrounds them also increases awareness and concern about the perceived threat.

4. The Internet and the web are mostly portrayed as environmentally-friendly, despite the enormous amount of energy consumed by the computers and the server farms that comprise today’s Internet. This receives some attention from the press, but only a minute fraction compared to the negative press attached to print.

Introduction to the Future of Environmental Concerns in Publishing

Concern about the environmental impact of just about everything was paramount through much of the 1960s and 70s, but then seemed to drop off the public agenda during the 1980s and 1990s. Was it the influence of aggressive Republicanism in the U.S., affluent economics, or just topic burn-out? Who knows? But the subject is back with a vengeance, in the publishing industry as in so many other industries. Al Gore’s 2006 film on global warming An Inconvenient Truth turned into a big hit with the public and a major prize winner. The DVD, along with Mr. Gore’s continuing public appearances have put the environment back on many people’s lists of top public concerns.

The paper and publishing industry is getting well-organized around this topic also, and while for years claims like “30% post-consumer waste,” were sufficient to show us that they cared, the number people would prefer these days “100% post-consumer waste.” (I recently submitted a proposal to a department of the Canadian government which insisted that the “Contractor make every effort to ensure that all documents prepared or delivered under this contract are printed double-sided on Ecologo certified recycled paper or on paper with equivalent post-consumer recycled content.” Electronic submissions were not acceptable! I found some paper at Staples that was labeled as being made from “100% post-consumer waste.” It looks like it.).

On April 3rd of 2008, Transcontinental Printing, based in Montreal, and one of North America’s largest commercial printers, made a trendsetting announcement: not only would it offer book publishers a paper made from 100% post-consumer recycled material, but it would offer this paper without additional cost over standard house paper stock. R.R. Donnelley, now the largest printer in North America, has followed suit. These were the two key bullets that many in the industry had been waiting for:

I expect that the executives of Transcontinental and Donnelley believe strongly that a move like this will help to stem the reduction in print production and consumption in North America. It will no doubt assuage a few guilty consciences. Ultimately I think its real impact will be only to heighten awareness of the challenge of waste and environmental-impact concerns in print publishing.

Several new initiatives within the industry are intended to further promote awareness of the potentially negative environmental impact of paper-making and consumption.

…But if we keep our eyes closed, we don’t see that we might be part of a problem or perhaps a solution. When it came down to it, I realized five things that I care about and hope that others might consider: 1) Kids and grandkids; 2) Global warming; 3) Supporting the protection of rare and threatened forests; 4) Caring for the diversity of life and cultures; 5) Knowing that I tried to do the right things in life.

There was a time when it was acceptable for child laborers in the United States to make products, and fortunately we evolved past that short-sightedness. Hopefully in the not-too-distant future we, as an industry, will look back at our shift in perception and remember when we joined forces to commit to shared principles of stewardship and accountability and how it felt to succeed.

Book Industry Treatise on Environmentally Responsible Publishing was last revised in 2009. The signatory list (PDF), revised in March, 2013, represents a broad cross-section of publishers and publishing suppliers (including one author, Alice Walker).

This is all laudable yet unlikely to increase anyone’s desire to use more paper, regardless of the amount of post-industrial consumer waste we can stuff into it. I’m convinced that the challenges attached to paper consumption created by these emotionally-laden commentaries in the press are certain to have a very negative impact on the future of print publishing.

The Controversy over Print vs. Pixels

There is a fast-growing body of evidence that challenges the notion that print has a higher carbon footprint that digital. The big challenge is that the data is very difficult to pin down in absolute “scientific” terms, and is very much subject to which data is considered, part of the same bias that influences how the data is interpreted. There are a tough-to-pin-down range of variables. For example should we only look at power consumption of paper versus the power consumption of digital, or also incorporate the recycling patterns for each (electronics are recycled at significantly lower rates than paper, and yet represent a larger long-term environmental threat).

Here’s is a screen shot of the numerous articles and reports I’ve downloaded on this topic: 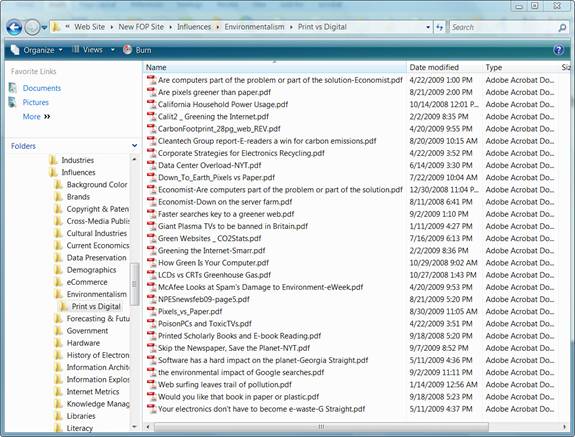 There are many! I’ll include links to some of the better articles and reports in the References section below, but in my estimation the most important is “Screening environmental life cycle assessment of printed, web based and tablet e-paper newspaper” (PDF) published by the The Centre for Sustainable Communications in Stockholm, Sweden. The Centre does have industry support, but appears to me largely free from the specific biases of industry associations on either side of the fence.

The paper referenced (and downloadable for free) above, at 106 pages, is extremely detailed and intended for a reader already immersed in the topic. I offer this straightforward quotation to shorten your journey:

Here is the chart illustrating the conclusion:

Jonathan Porritt, until 2009 the chairman of the UK Sustainability Development Commission is quoted as saying “There aren’t many industries around that can aspire to becoming genuinely sustainable. The pulp and paper industry, however, is one of them. It is inherently sustainable.”

An unattributed statement is that “On average it takes 500 kilowatt-hours of electricity to produce 440 lbs. of paper, the typical amount of paper each of us consumes annually. That’s the equivalent of powering one computer continuously for five months.”

The statement appears after this chart: 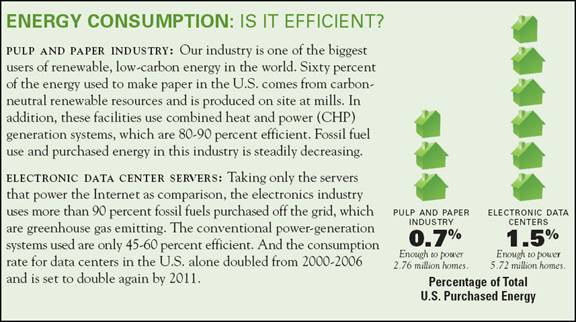 Following the chart under the subtitle: “Ask the Right Questions” is this question and answer:

“Aren’t most electronics recycled and made into other products?

“No. Only 18 percent of the U.S. electronic devices are currently recycled, and many of those are not being reused for other products. In the U.S., nearly 60 percent of all paper is recycled, recovered and reused to make new paper products.”

I can (and in the future will) devote a much longer study to the various viewpoints that color the arguments on this key topic. As stated in the introduction above, answers are elusive because of the possibility of using selective data to argue either side of the issue.

In the Annotations section of the March, 2008 edition of Harper’s magazine (subscription-only) is what amounts to an exposé of the environmental impact of the Internet.

This has been further documented by The Economist in several articles, the most important here.

The jury remains deadlocked on this key conundrum. It’s clear to me is that print on paper is not as toxic as usually portrayed in the media and that reading on digital devices is not as benign. To take a strong stand on one side or the other reveals only a lack of knowledge of the complexities of the issues involved.

At the same time, even a cursory exploration of the topic will demonstrate that all of the industries involved are well-aware of the high stakes with which they are playing and are deeply involved is searching for ways to reduce their carbon footprint. From forestry to pulp-and-paper to printing, computing, IT and onwards, while the short-term may not bode well, the long-term scenario strongly indicates that each of these connected industries are committed to being responsible corporate citizens when it comes to the issue of decreasing their carbon footprint.

Perhaps most significant: “The Green Press Initiative is funded primarily through grant foundations. Past and present funders include: FSC Global Fund, The Richard and Rhoda Goldman Fund, Giles and Elise Mead Foundation, Merck Family Fund, Town Creek Foundation, Wallace Global Fund, and the Weeden Foundation.” There’s one paper company, one printer and a few publishers on the list.

Their document “Book Industry Treatise on Responsible Paper Use” can be downloaded and signed.

4. Greg Kozac’s 2003 paper “Printed Scholarly Books and E-book Reading Devices: A Comparative Life Cycle Assessment of Two Book Options” is often cited by researchers. It presents the findings of a life-cycle assessment (LCA) of both electronic and print books.

5. “PoisonPCs and ToxicTVs” offers an in-depth analysis of just the toxic aspects of the electronics used for media consumption.