The Elevator Pitch for the Future of Computer Gaming

1. On the face of it there is a challenge comparing a computer-based game to a book, a newspaper or a magazine. However there’s very little difficulty comparing this medium to movies or television. Each is plot- and action-filled. The visuals can be stunning. In fact games are often based on movies or television series (which are often based on books, magazine articles and news stories). As with books and other publishing media, they are filled with distinct characters, strong plots, and (eventually) defined outcomes.
2. Data illustrates that computer gaming is increasingly providing consumers with a medium that can be a substitute for movies and television, and, to a lesser provable extent, print media.3. Computer gaming is interactive, far more than most (all?) other media. When played online, computer gaming can be a many-to-many medium. This is unprecedented in publishing, which is traditionally one-to-many. To what extent do these aspects of gaming represent the broader future of publishing?4. Most telling about the computer game industry is the economics.

5. Although now over a decade old, one of the most dynamic areas in computer gaming is multiplayer online games (MOGs), and its grander relatives MMOGs, MMORPGs and more (details below).

The future of the computer gaming industry looks very positive; the strongest of any of the media covered on this website.

Summary of the Future of Computer Gaming

The topic of computer gaming is perhaps the most controversial on this site. What the heck do computer games have to do with publishing?

Let’s start with three essential facts. The first is that the computer gaming industry has revenues that now exceed Hollywood’s box office numbers. Stop and ponder that.

Secondly the growth is gaming revenue puts most other forms of entertainment and publishing to shame: currently 40% growth year-to-year.

Third, the demographic of gamers is fast growing older. Most of us associate computer gaming with teenage boys. The stats tell a very different story.

The Raw Facts of the Computer Gaming Industry

This section is taken verbatim from the Entertainment Software Association‘s (esa) website’s “Industry Facts” page, because it so clearly lays out the baseline of what’s going in computer gaming today (I’ll avoid inserting quotation marks, as this is the whole page, verbatim):

America’s entertainment software industry creates a wide array of video and computer games to meet the demands and tastes of audiences as diverse as our nation’s population. Today’s gamers include millions of boys and girls, men and women and people of all generations. More than two-thirds of all heads of households play games. This vast audience is fueling the growth of this multi-billion dollar segment of the U.S. economy and bringing jobs to communities across the nation. Below is a list of the top 10 entertainment software industry facts:

Aside from early adventures with Pong, I’ve never taken to computer gaming, so don’t relate to this medium as I do to the other media discussed on this site. However what the description above fails to stress sufficiently is the dichotomy between games played offline and games played online, sometimes solo, but more often as multiplayer online games (MOGs). The MOG business is growing fast, as I’ll discuss further below.

The Economics of the Computer Gaming Industry

Going back to the year 2000, the International Digital Software Association (IDSA) (which is now the Entertainment Software Association (esa)) was reporting a “$10.5 billion market for game software publishing, wholesaling, and retailing, as well as transporting, wholesaling, and retailing of some, but by no means all, complementary game hardware.” At the same time it reported that “in 2000, sales in the game software industry were growing at a rate of 15 percent per year, more than double the rate of growth of the U.S. economy as a whole and far outpacing sales growth in related industries.”

Mark Anderson, back in the October 15th, 2002 edition of his incisive (subscription-only) Strategic News Service newsletter reported “No one who has been watching the competition between the (computer gaming) leaders doubts the serious nature of their own competition, nor the high stakes for which they are playing. In terms of raw money, most analysts now agree that video game sales have eclipsed the $7B Hollywood entertainment business, with total sales this year heading for something like $10-12B. (Or, if you believe the Seattle Post-Intelligencer staff, $20B.)

“Indeed, at a time when most areas of software and hardware continue to suffer, there is every indication that sales of game boxes and software are on a rocket. I would suggest that we’ll see total receipts in 2003 for game software and hardware in the range of $12-15B, which means that it is perhaps the fastest-growing part of the computer industry.”

There was a blip in growth around the time of the Web/Internet blow-out in 2000-2002, but by 2006, the Wall Street Journal reported “A strong December capped off a record year for the videogame industry, with U.S. sales of software, hardware and accessories up 19% to $12.5 billion in 2006, according to market research firm NPD Group.”

The NPD Group, which appears to be the top accepted authority on what’s happening in this industry, reported on January 31, 2008 that “U.S. sales of video games, which includes portable and console hardware, software and accessories, generated revenues of almost $18 billion, a 43 percent increase over the $12.5 billion generated in 2006.

“Retail sales in the PC game software industry reached $911 million in 2007, bringing the total console, portable and PC game industry to $18.8 billion, a 40 percent increase over the $13.5 billion generated in 2006.

“‘NPD’s consumer data uncovered some interesting trends to follow during the current console transition’ said Anita Frazier, industry analyst, The NPD Group. ‘For example, the 35 years of age and older demographic realized the greatest percentage growth, driven by software and accessories acquisitions, while the greatest increase in hardware sales came from the ‘core’ 18-34 year old demographic.'”

Within those sales DFC claims that the “worldwide online game market is forecasted to grow from $3.4 billion in 2005 to over $13 billion in 2011,” and that “during this time period North America is expected to challenge current market leader Asia as the leading region for online games.” 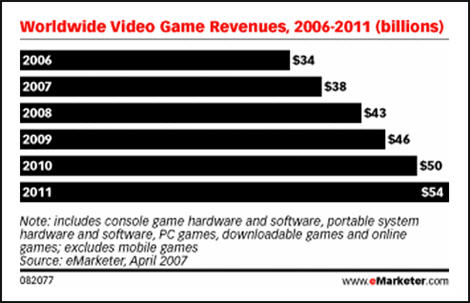 The numbers keep growing: A September 2007 article on eMarketer reports that DFC had revised its claim, and now stated that worldwide sales would “grow to $47 billion in 2009, up from $33 billion in 2006.” eMarketer agrees with that statement, and then extends its own forecast to total $54 billion in 2011.

Multiplayer online games, aka MOGs, are a fast-growing segment of the computer gaming industry. The essential definition (provided by Wikipedia), is that a MOG “is a multiplayer video game which can be played via a game server over the internet, with other players around the world.” This differentiates MOGs from most computer games which are played solo (or with friends and family), connected to a television but not to the Internet.

The simple MOG has transmogrified into several variations, MMOGs, MMORPGs, MMOFPS, MMORTS and more. (Look to Wikipedia if any of this interests you.)

The main distinction worth making here is that the scale of the multiplayer games has grown very dramatically in the last decade, leading to the distinct category called the “massively multiplayer online game” (MMOG). Quoting again from Wikipedia, a MMOG “is a video game which is capable of supporting hundreds or thousands of players simultaneously…and features at least one persistent world.

“MMOGs can enable players to cooperate and compete with each other on a grand scale, and sometimes to interact meaningfully with people around the world. They include a variety of gameplay types, representing many video game genres. Many MMOGs require players to invest large amounts of their time into the game. Most MMOGs require a monthly subscription fee.”

MMOG play has exploded to the point where the most popular game, according to source, is the World of Warcraft, launched at the end of 2004. It now has over 8 million subscribers worldwide. As you’ll see from the graph below, this represents a majority of MMOG subscribers around the world, apparently 62.2%. The monthly subscription fee in North America is $14.99…that’s a lot of revenue for new owner Activision (for an interview with Activision’s CEO, see the References section linked below). 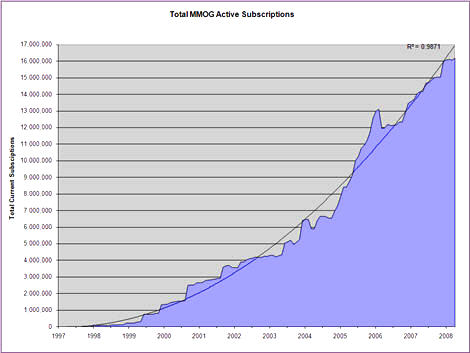 The Social Impact of Computer Gaming

The number one issue that continues to plague the computer gaming industry is the belief, held by many, that the violence in many of the most popular games translates into violent behavior in those game’s players. According to the Entertainment Software Association, admittedly with a vested interest in debunking this theory, comes the statement:

“The truth is, there is no scientific research that validates a link between computer and video games and violence, despite lots of overheated rhetoric from the industry’s detractors. Instead, a host of respected researchers has concluded that there is no link between media violence and violent crime. Here is what some of those experts and studies say:

‘The research on video games and crime is compelling to read. But it just doesn’t hold up. Kids have been getting less violent since those games came out. That includes gun violence and every other sort of violence that might be inspired by a video game.’
— Helen Smith, forensic psychologist, youth violence specialist and author, quoted in Gerard Jones’ book Killing Monsters (2002).”

There are several other sources quoted on this web page, with enough information to make one at least question the proposition.

The latest furor surrounds the April 29th release of Grand Auto Theft IV. In a May 3rd article in PC World “Rants Begin Against Grand Theft Auto IV,” everyone from Mothers Against Drunk Driving (MADD) to the mayor of New York weigh in to condemn the game. The game is rated M (Mature for ages 17+) and the warning label makes it sound like plenty of fun for a youngster: there’s “Intense Violence, Blood, Strong Language, Strong Sexual Content, Partial Nudity and Use of Drugs and Alcohol.” Total sales for the series are estimated at 70 million units; Grand Auto Theft IV has projected sales of $400 million.

Update: The May 8, 2008 edition of the Wall Street Journal reports that “the urban action videogame Grand Theft Auto IV exceeded bullish expectations by racking up more than $500 million in first-week sales…Take-Two Interactive Software Inc., the New York-based publisher of the Grand Theft Auto series, said retailers sold more than six million copies of the game globally since it went on sale April 29, which it said was a record for first-week sales of a videogame.”

3. Complementing that report is another from the same association, “2013 Essential Facts About the Computer and Video Game Industry,” focused more on the who and why aspects of computer gaming.

4. The gaming insider’s sites include www.gamasutra.com and the GamePro group of sites, packed with more reviews, data, analysis and gossip than you might care to peruse. There’s also Kotaku, with “gossip, news and leaks for obsessive gamers,” and Joystiq, “launched in June 2004 as an alternative to the junket-ridden, glorified press release fodder that passed for video game journalism at large mainstream media gaming news outlets.”

5. On Wikipedia is an updated List of free massively multiplayer online games.

6. Here’s a rough transcript of an interview at the D6 conference with Bobby Kotick CEO of Activision (ATVI), one of the industry’s largest computer game companies, with net revenues of approximately $2.7 billion. Some video highlights of the interview are available also.

7. What Role Will Advertising Play in the $40 Billion Video Game Industry?

DFC Intelligence offers a well-reasoned scenario for the likely growth in advertising revenue for the video game industry in an article from its website.

Mark Medley in Canada’s National Post looks at the intersection of video games and books. Kevin Grace, franchise manager at 343 Industries in Seattle, is quoted as saying: “’If they want to put their feet up and think about things a little bit, we can give them a Halo story in a book,’” he adds. “’And if they just want to sit on the couch and start blowing things up, we’ve got plenty of fun for them there, too.’”