The Elevator Pitch for the Future of the Music Industry

1. With so many different communication industries covered on the FutureofPublishing.com, music occupies a position that sets it apart from the others; it’s where the battleground has been most clearly drawn. In the terminology of Nicholas Negroponte, it’s a deadly struggle between “bits” and “atoms” – the analog and the digital. Analog atoms are easier to control than digital bits. Analog also happens to feature higher retail prices and better margins.

2. Perhaps, in the end, information doesn’t want to be free. But once it’s digitized it’s unquestionably easier to set it free: to distribute multiple copies, often in contravention of copyright laws. Once the digital horse gets out of the barn…well, I think I’ll just stop that metaphor right there. But it will become clear as you read this article that the forces that have been unleashed by the digitization of music are proving all-but-impossible to reign in.

3. The changes in the music industry go far beyond the illegal distribution of digital copies of songs. Beneath these all-too-visible waves is a changing power structure: the relative power of artists, producers, distributors and consumers.

4. While the music industry is in the midst of an enormous transformation, music today remains exceptionally popular amongst consumers, particularly the demographic that matters most: younger people. There’s a great future for the music industry. It just won’t look very much like the music business of the 20th century.

Summary of the Future of the Music Industry

Music is a creative endeavor, and is “published” and then distributed in a manner similar to all other types of publishing examined on this site. Beyond the music itself, the lyrics are often poetic — indeed musicians such as Leonard Cohen and Joni Mitchell are among the many musicians who have published books of poetry and/or lyrics from their songs.

Like books, the publication and distribution of music has always depended on available technology: 78s, LPs, singles, 8-track, CDs and pure digital. Technology and manufacturing has always shaped the direction of this industry, as it has all others in this survey.

The Economics of the Music Industry

According to a report on The iPod Observer, quoting data from NPD, “some twenty-nine million consumers ‘acquired’ digital music legally during 2007, specifying the legal online download services such as iTunes. That represents a 5% increase compared to 2006, and that growth was largely driven by consumers age 36 to 50. NPD said that demographic ‘aggressively acquired digital music-players in 2007.'” The report continues, “however, kids today are too busy stealing music through P2P networks to actually pay for it in either CD or digital format… One million people stopped buying CDs in 2007, and NPD said that a majority of those people were ‘younger consumers.’ More specifically, some 48% of U.S. teens didn’t buy a single CD during the year, and that’s a huge increase compared to the 38% who eschewed CDs during 2006. Be that as it may, digital downloads now account for 10% of total music sales.”

Another blog report on NPD’s data in the New York Times reported that “NPD’s annual survey of Internet users, which is some 80 percent of the population these days, found that 10 percent of the music they acquired last year came from paid downloads. That is a big increase from 7 percent in 2006. But since the number of physical CDs they bought plummeted, the overall share of music they paid for fell to 42 percent from 48 percent.” 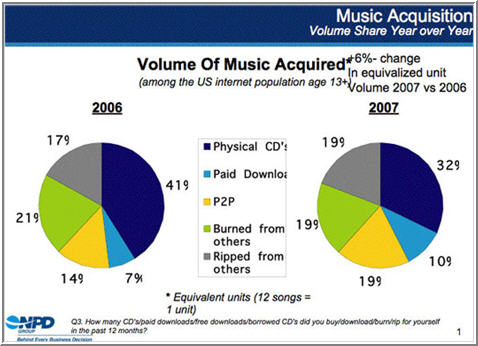 (It was distorted in the original – the % signs are squished.) 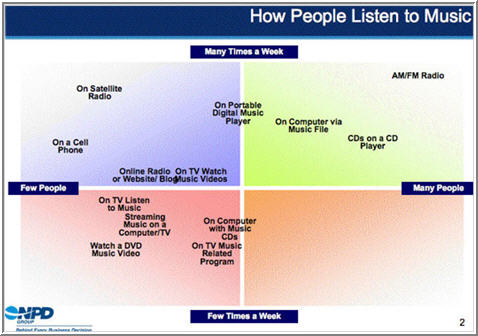 This second slide highlights a further observation from the New York Time‘s posting: “For penetration, listening to AM/FM radio and to CDs on a CD player are still the most popular activities. People also listen to music on the radio more times per week than any other method.”

In the U.K., according to the Entertainment Retailers Association, game sales exceeded music sales for the first time in 2007, and were quickly catching up with DVD sales. From a March press release: “Sales of music downloads increased 67.5% by value in 2007 to reach £145.6m (roughly $285 million U.S.), six times the value of the physical singles market.

Digital Rights Management and the Future of Music

Digital Rights Management and the Future of Music

The digital rights management (DRM) battles that plague so much of the publishing industry started in the music industry because CDs had little or no built-in DRM protection, because software for burning CDs to digital formats was relatively easy to develop, and because Microsoft and RealNetworks got into battle early on, inspiring a host of smaller nimble competitors. Music files are relatively small compared to, for example, video files, and so could easily be distributed via even slow Internet connections. The traditional players in the music industry reacted with fury and managed to set the stage for battles to come in other publishing industries.

The history of the battle for music rights on the Internet is brief and very much indicative of the kinds of struggles that have begun to impact other content providers. It started in 1999 with Napster, as copyrighted music began to be distributed around the net in a free-for-all. It couldn’t last and it didn’t: the courts mainly found in favor of the large traditional copyright holders of music and by the summer of 2001 Napster was gone.

Now, more than a dozen years later the big music labels are changing their tune on DRM. As noted in a January 2008 blog in the New York Times, “Sony BMG said this afternoon that it would start selling music in the MP3 format through Amazon.com. That makes it the last of the four big record labels that have abandoned digital rights management software, which limits how many times copies can be made of digital music.”

Even When They Win, They Lose

A May 8, 2008 article (firewall) in the Wall Street Journal reported that a federal judge in Los Angeles issued damages of $111 million against an Internet company, TorrentSpy, which allowed users to find movies and music to illegally download (using a BitTorrent-style technology, whereby TorrentSpy does not actually store the files but facilitates locating individual user’s computers that do.)

Sounds good until you read a few more of the details: TorrentSpy had already shut down in March, because of the ongoing litigation. Furthermore, the holding company, Valence Media, based on the little Caribbean island of Nevis, declared bankruptcy, as have its “principals”.

As the Wall Street Journal straightforwardly states, “The strategy of continuing to fight such sites in court seems to be having little measurable impact on piracy.”

References to the Future of Music

1. The Future Music Blog allows you to “explore proven strategies for success for independent musicians, songwriters and producers in this future music blog for indie music success.”

2. Devoting substantial coverage to the declining sales of CDs, in April 9, 2007, the Financial Times quoted extensively from Recorded Music and Music Publishing [2007-2009], published by Enders Analysis.

Although the report predicted that CD sales will start stabilizing in 2010 when penetration of MP3 players such as the iPod is expected to reach saturation, the Financial Times paraphrased Enders’ concern that the lifespan of any hit album is now shorter and, as a result, revenues from blockbusters are no longer covering the labels’ costs and other commercial failures, and quoted the inescapable conclusion: “The labels’ business model is at a very uncomfortable juncture.”

3. “Death of the Record Store.” In a January 18, 2007 article, The Economist pointed to an issue I had overlooked: the music retailing business is falling as fast as the rest of the traditional music industry. HMV, Virgin and other retailers are all pointing to declining financial results. Legal online resellers, like Amazon and CDNow (oops – they’re now owned by Amazon!) are siphoning off another chunk of the business. Retailers are pushing DVDs into the prime display racks: how much longer will this be a salve?

4. “Canadian Record Industry Hit Hard by 35 per cent Drop in First Quarter of 2007”. It looks like the Canadian record industry may be suffering even more severely than the U.S. or Britain. As Greg Quill reports, “Sales of CDs and music DVDs in Canada in the first quarter of this year fell by an unprecedented 35 per cent – to $68.7 million from $105.6 million in the same period in 2006 – the most drastic decline in “physical” music sales of any country in the world, according to figures released yesterday by the Canadian Record Industry Association… Unit sales for the same period were down 30 per cent, to 7.1 million from 10.2 million in 2006.”

5. Hit Albums: In a blog from February, 2006 Chris Anderson, the very-well-known author of The Long Tail focused on the decline of the big hit albums and included this chart in his presentation: 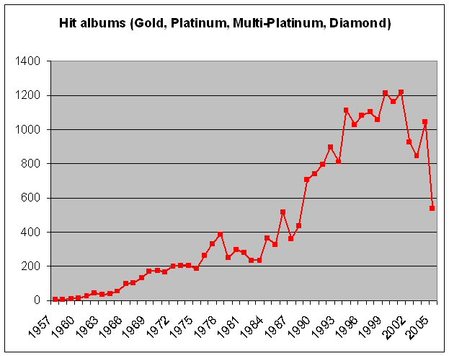 6. Dancing to a New Beat. The ever-upbeat eMarketer is a prognosticator after my own soul. They don’t despair. We’re in the midst of some huge changes, but that’s not the end of the music industry. According to this report “With falling CD sales and single downloads failing to pick up the revenue slack, the music industry worldwide has been singing a sad song for the last few years, but that tune is about to change — along with almost everything else in the music business. 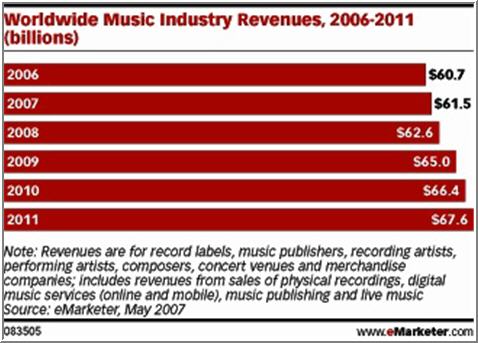 “eMarketer estimates that the worldwide market for recorded music, live music and music licensing will reach $67.6 billion by 2011, up from the 2006 total of $60.7 billion,” says Paul Verna, eMarketer Senior Editor and author of the new Global Music: Tuning into New Opportunities report. “Over that period the industry will grow at an average annual rate of 2.19%.”

7. The big news at the beginning of 2007 was that EMI and Apple partnered on DRM-free premium music. For some reason I foolishly took that to mean that EMI would be giving the stuff away for free, when in fact that were increasing the price of each jingle by 30%. The difference is that the music will not include Apple’s DRM scheme (or any other), making it easy to transfer tunes between various digital music players.

This is being touted as brilliant, brave forward thinking by EMI. I call it a long overdue move, but one it will not regret.

8. “The Slow Death of DRM”. Columnist Steve Gordon, formerly a lawyer for Sony Music, states emphatically that the “DRM walls are crumbling.” He writes, “Moreover, there is mounting pressure by industry players, especially legit distributors, to get rid of it… Calls for discarding DRM are also coming from Rhapsody and Yahoo!. He concludes: “Even if the legal attacks against DRM do not prevail, the majors should take note: get rid of DRM, because it’s bad for business.”