1. Publishing, particularly as defined on this site, is a “cultural” activity. Because much of this cultural activity relates to making money through the sale of its products it is also an industry: “the organized action of making of goods and services for sale.”

2. The notion of “cultural industries” is modern, reflecting, I think, an essentially bureaucratic desire to find a way to classify culture within the broader context of accountable governance. How are civil servants, charged with keeping our countries afloat, to account for poets and ballet dancers? First of all by classifying their activities into economic groups, and those groups into the cultural industries.

3. In North America, in the 1930s, statisticians developed a method to keep a track of all industrial activity. The Standard Industrial Classification (SIC) system was the first devised to classify establishments by the type of activity in which they were mainly engaged so as to compare establishment data from various facets of the U.S. economy. It did not include a classification “cultural industries,” nor did it classify many of the creative activities that today are seen as part of this phenomenon.

4. Not surprisingly (as a private NAICS resource site explains) “in recent years, rapid changes in both the U.S. and world economies brought the SIC under increasing criticism.” All of this led from the SIC method for classifying moneymaking activities to the North American Industry Classification System (NAICS). NAICS doubled the number of top-level groupings of industrial classification among other changes. The first version appeared in 1997 with a major revision in 2002. The slight, mostly annual, revisions are listed and linked for downloading.

The Challenges of the NAICS to the Future of Cultural Industries

NAICS does not fully encompass the range of cultural industries today. There are several issues.

This is problematic: just because software companies are called “software publishers” they’re lumped into the same industry as book publishing. Well, not actually, because traditional print-based publishers, mainly newspaper, periodical and book, are all in the 511 classification. The rest are in 512 and above.

Arts, Entertainment, and Recreation is defined by NAICS as “those businesses engaged in meeting the cultural, entertainment, and recreational interests of their patrons….Casinos and other gambling businesses are recognized for the first time in NAICS, as are historical sites and sports teams and clubs. In all, there are 25 industries in the sector, most of which are new — 19 in all. While most of the industries in the sector come from the SIC Services division, others come from Retail Trade and Finance, Insurance, and Real Estate.” 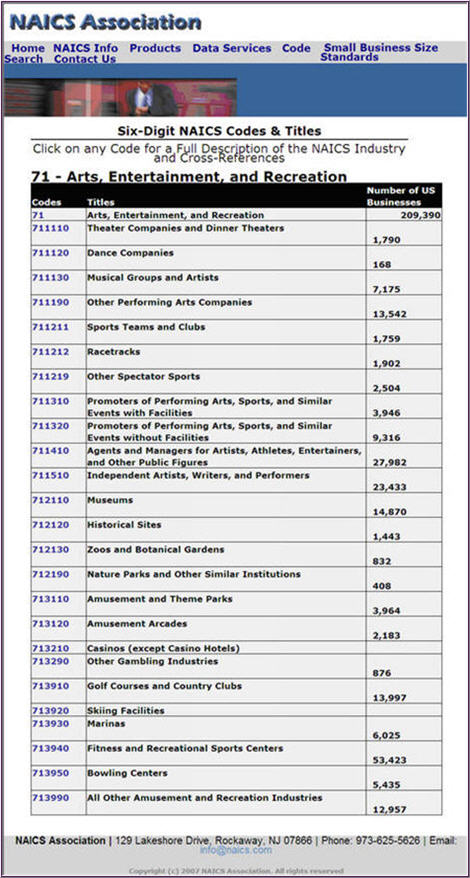 Oddly enough, while culture clearly abounds in these listings, very few are relevant to the future of publishing. Bowling Centers — no. Zoos and Botanical Gardens — no. Amusement and Theme Parks — a stretch. But included above are also:

• Musical groups and artists, and
• Independent writers, artists and performers

I prefer to examine the economic activities of these groups within the categories of their producers, record companies and book publishers and so TheFutureofPublishing.com may fail to take proper account of artists and performers, per se. 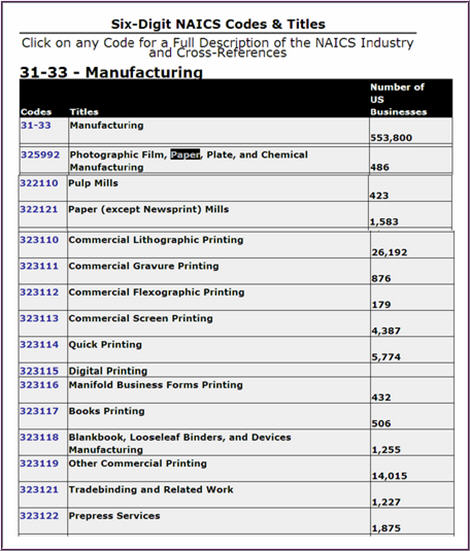 The NAICS classification for manufacturing encompasses most of the industries that allow us to read on paper, whether books, newspapers or magazines, and in significant detail. This is very helpful.

You’ll find references to NAICS data throughout this site. As with all data, whether collected by civil servants or entrepreneurs, its inclusiveness, currency and comprehensiveness will always be subject to debate. But comparative systems of data are more valuable than disparate systems, and NAICS stats often help clarify the answers to some tough questions on where publishing is headed.

1. The United States Census Bureau “provides the latest information on plans for NAICS revisions, as well as access to various NAICS reference files and tools.” It maintains a History of NAICS – Early Development Documents, and an FAQ.

The 2010 Standard Occupational Classification (SOC) system is used by Federal statistical agencies to classify workers into occupational categories for the purpose of collecting and disseminating data. All workers are classified into one of 840 detailed occupations according to their occupational definition.