1. As the title indicates, this section is not primarily focused on the broad range of social issues that have been connected to the spread of the Internet and the Web, but more specifically to the demographic aspects of those issues.

2. The reason for this should be obvious: clearly all forms of Web technology, particularly social networking, have been embraced with much greater enthusiasm by the younger generation. Nearly all would agree that this is going to greatly impact how the Web is used in the future, and question its full impact on the future of publishing.

3. The issue of course remains: as today’s Web-crazy kids grow older, will their behavior patterns change, or will they continue largely on track with the trends we see today? The answer to this question, for which there is little or no as yet existing data, is I think the single largest determinant of the future of publishing.

Introduction to Social Demographic Issues and the Future of Publishing

Working as a computer instructor for an adult-education program at a community college, I am keenly aware of the gap in computer knowledge between my younger and older students. My observations were confirmed the day a new student walked into our library area and glanced at the encyclopedia volumes stacked on a bookshelf.

“What are all these books?” he asked.

Somewhat surprised, I replied that they were encyclopedias.

“Really?” he said. “Someone printed out the whole thing?”

— From ReadersDigest.com, quoted by David Pogue.

As I reviewed the fifty-plus articles I’ve collected on this topic, I find them going back to the early part of this decade, when it first became clear that there was a broad division in Internet utilization between, for example, teenagers, and those over the age of 50. There’s no surprise that older generations, having been raised in a print era of newspapers, magazines and television, are less likely to be Internet enthusiasts than those younger. What has been surprising is the depth of the gulf between generations. The numbers don’t trend at 10% or 20%, but more like 60% and upwards. The growth of “social media,” in its myriad aspects, has only exacerbated this trend.

Like all other data related to the growth of the Internet (and the decline of traditional media), there is a wealth of data, much of it contradictory, and none of it definitive. In this article I’ll try to review some of the best studies I’ve found, and provide as much data and as many charts as I find relevant.

Data on Social Demographic Issues and the Future of the Internet

I repeat myself, but there is a tremendous focus on youth habits with relation to the Internet. It is studied ad nauseum, and the conclusions will surprise no one: the younger you are, the more the Internet and the Web are a major part of how you spend your time and how you interact with your social circle. I sense that much of this interest has to do with salivating advertisers (and their contractors). As big as the Web is today, most data related to the youth demographic indicates strongly that it will only get much larger. Ah, more ad dollars to be spent; more buying to be influenced!

I’ll offer a plethora of links in the References section to this article, but will start below with a few charts.

The ever-reputable Pew organization, in an article titled, “A Portrait of Early Internet Adopters: Why People First Went Online — and Why They Stayed” notes “Though people might assume that the rapid uptake of the internet by businesses was the main driver of growth in the past decade, many of our respondents said they first went online for personal reasons, rather than professional or educational reasons. Fully 50% of the respondents stated they first went online for “personal” reasons; 31% said work was the cause; 19% said school was the cause. In fact, in a series of PEW Internet surveys going back to 2000, respondents have continuously cited personal reasons above work-related or school-related reasons as the cause for their first using the internet.”

The chart below is copied from this article. 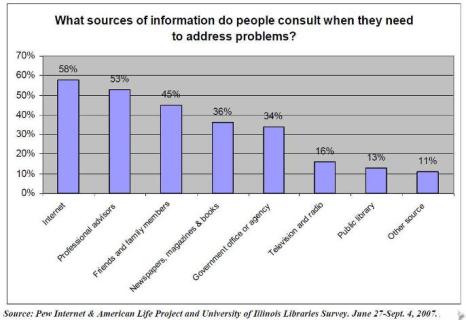 The next chart, from emarketer.com, illustrates that the Internet generation are media hogs. While of course time spent on the Internet is increasing, so is time spent with other media, including TV and radio (although curiously not with game consoles, which contradicts many other studies). 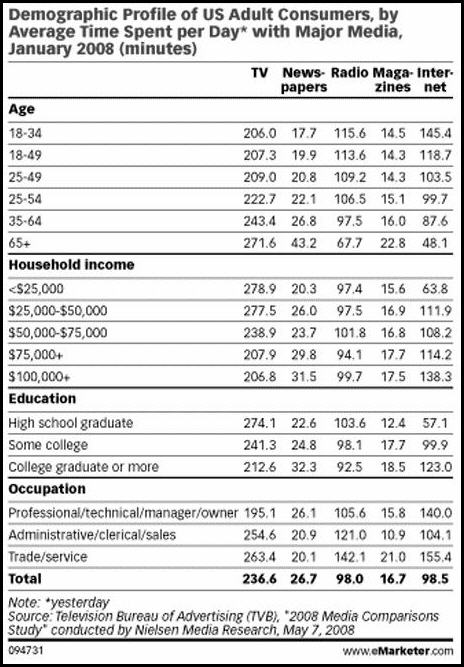 Meanwhile video is fast-becoming one of the top reasons for visiting the Web, whether for posting or perusal: 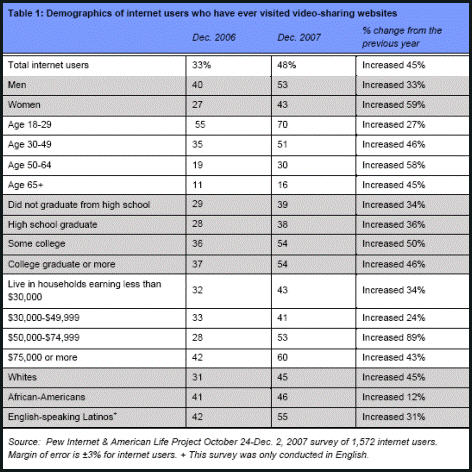 And, of course all of this data leads other observers to concerns about literacy generally, and reading specifically, as the following chart makes clear:

Some of the conclusions from this data are a great concern about whether today’s ostensibly educated youth are in fact prepared to succeed in the workforce.

Conclusions about Social Demographic Issues and the Future of Publishing

As Andrew Sullivan notes in his 2008 article in the Times Online, “previous innovations – writing itself, printing, radio, television have all shifted the tone of our civilization without destroying it.” (Here he’s noting observations from Nicholas Carr’s famous article in The Atlantic Monthly).

Sullivan continues: “Here’s hoping. Shallowness, after all, does not necessarily preclude depth. We just have to find a new equilibrium between the two.”

Whether today’s Facebook-facing, instant-messaging youth will mature into a different type of media consumer remains to be seen.

This PEW report from July, 2005 is subtitled “Youth are leading the transition to a fully wired and mobile nation.” 57 pages of intriguing research.

2. Is Your Toddler Multi-tasking?

“Multitasking begins as early as age 2, according to the NPD Group’s ‘Kids’ Leisure Time II’ report, as discussed in April, 2007 at emarketer.com.

A short abstract from this (PDF) study: “Today’s 12-18 year old members of the Millennial Generation have been referred to as “screenagers” because of their affinity for electronic communication via computer, phone, television, etc. screens (see Rushkoff, 1996). These young Millennials are at home in the instant messaging and chat environment. It is well known that their communication and information-seeking behaviors are distinctly different from those of other age cohorts and radically different from those of the baby boomer generation.”