The Elevator Pitch for the Future of Radio

1. Radio listening takes place mostly in cars, during commutes to and from work. Commuting times are increasing, not decreasing, so radio listening is not much suffering. It is still an important broadcast/publishing medium.

2. Audiences and revenues are, however, decreasing, although not as dramatically as with most other media types. Back in 2007 eMarketer reported that spending for online advertising surpassed ad dollars spent on radio advertising, with online marketing reaching $21.7 billion while radio reached $20.4 billion.

3. The future of radio is challenged by mobile audio devices (with the iPod at the forefront). Most importantly in the youth demographic, radio is losing out to user-programmed audio.

Like television, radio remains largely a “push” medium with heavy advertising content. As such it goes against the prevailing media adoption trends: users programming their own content in an ad-free environment. My prognosis for the future of radio is neutral.

Introduction to the Future of Radio

Radio somehow became the lost child of the Internet revolution. It falls below most of our “future of publishing” radar readings. Overall it generates less original content than other publishing media, but it is a key source for the dissemination of original content from other sources. The original content generated by talk shows and morning and afternoon drive shows is remarkably as ephemeral as much of the content on the web.

Where has radio traditionally had its greatest impact? In the live broadcast of the audio of current events (mostly sports), in delivering news, and in introducing audiences to new music.

If people didn’t drive so much, radio would already be dead. As the chart below illustrates, radio listening remains the #1 audio choice for drivers. 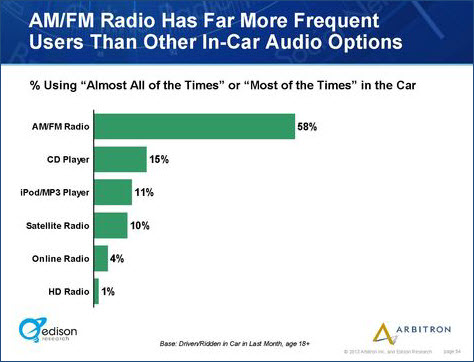 Arbitron, the accepted arbiter of data for the radio industry points out in its 2009 National In-Car Study that “Americans spend nearly 20 hours in their cars per week and travel more than 200 miles..”

Drivers increasingly program their own audio for listening while driving. The much improved audio systems in most new cars encourage drivers to either plug in their own audio inputs, or listen to CDs or audiobooks. Audiobooks continue to enjoy significant sales increases, and have reached nearly $1 billion in annual sales. As the Audio Publishers Association (APA) points out, like radio, “the primary usage [of audiobooks] is while traveling and commuting.” And as many audiobooks are borrowed through public libraries, this sales figure surely understates the full audience for this medium.

As the Project for Excellence in Journalism (PEJ) 2008 report states, “What we once knew as radio is now something more complex and in many ways more interesting. In addition to the AM and FM dials, now there is satellite, HD, Internet, MP3s, podcasting, and increasingly, cell phones.”

According to the PEJ report on radio, “traditional broadcast radio has maintained an impressive following, even among fans of new audio, though the numbers are falling slightly. According to Arbitron, traditional radio commanded a weekly audience of 93.3% of the population 12 and older as of the spring of 2007. This translates into nearly 233 million people over the age of 12 who tuned into the AM/FM dial at least once during an average week.

“That number represents a modest drop of 1.6 percentage points since the spring of 2000. The decline is relatively small compared with newspapers, network television and magazines (emphasis mine) that, like traditional radio, also face competition from new technologies.” 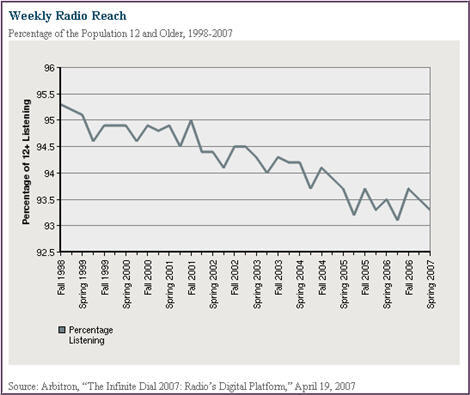 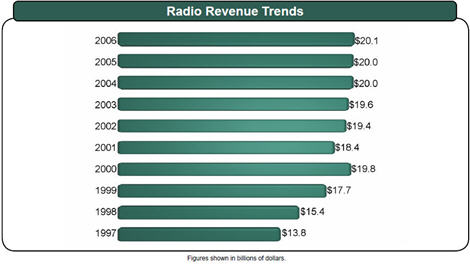 “There are simply too many radio licenses that have been issued by the FCC creating much more supply than the industry can support. This creates too many bottom feeders in the marketplace that drag down advertising rates for everyone else.”

“The FCC reports the total number of licensed radio stations has risen to 13,977 — the highest number ever. Today’s count is nearly 1,200 above the number of licensed stations a decade ago. The current total includes 6,309 commercial FMs and 4,776 AM stations. Not part of the count is the 831 licensed low-power FMs.”

The Prognosis for the Future of Radio

Paraphrasing from the PEJ report on radio: Much more change is to come.

As you’ll find in the other Industries articles on this site, the radio industry is well-served by a strong association that issues numerous reports bearing the general message that “the rumors of my death are premature.”

The most important industry association for radio is the Radio Advertising Bureau (RAB), whose mission is to “lead industry initiatives and provide organizational, educational, research and advocacy programs and services that benefit the RAB membership and the radio industry as a whole.” A number of reports and datasheets are linked from this page.

Arbitron’s Radio Today provides truly “an in-depth look at radio listening nationally and by individual formats. Radio Today combines Scarborough consumer data with Arbitron audience data to develop a comprehensive profile of radio listening across America. With information on the purchasing plans and leisure activities for 17 specific formats, the study provides valuable insight on the evolving relationship between radio and its diverse listener base.”