After a vague but vaguely credible report earlier this week from TechCrunch there’s no end to the discussion about whether Microsoft really intends to purchase the portion of Nook Media still held by Barnes & Noble and what that could mean to both companies. As a journalist I tend to default to the assumption that people and their employers make big plans for good reasons. As a consultant I know just how rarely that’s true. Sure, Microsoft can buy the rest of Nook Media. Microsoft has over $74 billion in cash and short-term investments. It can buy just about anything it wants. This is a company that spent over $8 billion buying Skype and a year later simply wrote off its $6.2 billion investment in aQuantive, the online ad network that was Microsoft’s second largest acquisition (after Skype). 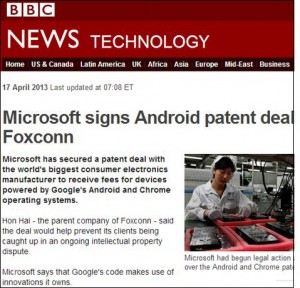 Microsoft can buy whatever it wants whenever it wants for any goddamn reason in the world. (Though before you make too much fun of Microsoft repeat after me: “Facebook bought Instagram for $1 billion and gained 13 staff and no direct revenue.”) Conjure up any reason you like to explain why Microsoft might toss a billion or so more into the same trash can as its other recent investments.

Barnes & Noble has sold about 10 million various Nook devices: more than 10 times the number of Surface tablets sold by Microsoft. Perhaps Microsoft can capitalize on the sales channel. Apple has had enormous success selling iPads through company-branded stores: maybe Microsoft can take advantage of Barnes & Noble’s nearly 700 trade bookstores and 700 college bookstores. Amazon, Apple and Google all operate online e-bookstores — perhaps owning the second most popular online bookstore could catapult Microsoft into some sort of driver’s seat. It doesn’t matter.

If you had $70,000 in the bank you wouldn’t think twice about risking a thousand. More so if you knew that next year your earnings after taxes would add another $15,000 or so to your nest egg. Particularly if your parents were constantly nagging you: “I don’t know why you don’t invest some of that money. It’s not liked it’s earning anything in the bank.” (A few weeks ago Apple capitulated to that harangue and agreed to return $100 billion to shareholders.)

Playing financial games with Barnes & Noble has become a complex enterprise. For starters Barnes & Noble is really three different companies, even more depending who’s counting. There’s the general trade bookstores, a total of 677 as of January 26, 2013. Add 1 and you’ve got the 678 company-operated college bookstores, “serving more than 4.6 million students and faculty members at colleges and universities across the United States.”

Then there’s the Nook business. Until recently Barnes & Noble’s great light and hope, it’s become a drag on earnings: time to eject. Because the all-digital Nook remains slightly sexy to some suitors; Microsoft currently the most handsome at the prom. But the Nook business includes both hardware and digital content. It’s the hardware that’s losing ground fastest to Amazon, while digital content sales keep Barnes & Noble in the #2 spot behind the undisputed champ.

PublishersLunch dissects the sloppy work at TechCrunch but their analysis is behind a firewall. A big part of the confusion is that Nook Media LLC is an improbable collection of enterprises: it was established with the Nook hardware, the online BN.com revenue and the revenue of the college bookstore division. That means selling t-shirts to teenagers, among other things. Oh yes, and some textbooks, the value of which is projected to drop from $4 billion in 2012 to $173 million by 2017. Some people mistake Barnes & Noble as a player in the shift to digital textbooks. It’s not. The market is dominated by CourseSmart, Chegg and a few others, not by Barnes & Noble or by Follett, its #1 competitor specifically in college bookstore operations. Does Microsoft want to run 700 college bookstores?

Apple gained a focus on the education market very soon after the first Macintosh computers shipped in 1984. The strategy has been a solid win for Apple, even with Google now coming on strong. Apple VP Phil Schiller has been widely quoted as saying, “Education is in Apple’s DNA.” Certainly the iPad is solidifying Apple’s presence in schools.

By 1997 Microsoft also identified the education market as a key to its success. In 2008 Microsoft announced plans to invest $235 million (over five years) into its Partners in Learning program, which provides software and training to students, teachers, and schools. The funding was renewed in 2012 along with an additional $75 million aimed at increasing digital access to educational materials in Africa.

A search for “Barnes & Noble” on Microsoft’s news site is revealing. The first result returned is of course the announcement of Microsoft’s $300 million investment in April, 2012. The second item is the March, 2011 press release describing how Microsoft “filed legal actions…against Barnes & Noble, Inc. and its device manufacturers, Foxconn International Holdings Ltd. and Inventec Corporation, for patent infringement by their Android-based e-reader and tablet devices that are marketed under the Barnes & Noble brand.”

A Lawsuit Makes for Strange Bedfellows

Barnes & Noble is no stranger to the courts of commercial law. Two of the most expensive lawsuits the company has fought involve the College division and, separately, Microsoft patents launched against Android technology.

On August 11, 2009, Barnes & Noble announced that it had bought the Barnes & Noble College division from chairman Len Riggio for nearly $600 million. Few people were aware that the college stores were then owned privately by Len Riggio and his wife. And so the public company that he controlled purchased the private company that he owned for what many thought a princely sum. Barnes & Noble ended up in a lawsuit with shareholders (including the Louisiana Municipal Police Employees Retirement System). Noting a “fishy smell” surrounding the deal, Judge Leo Strine allowed the lawsuit to proceed.

When Barnes & Noble accepted Microsoft’s investment, just over a year ago, it managed to validate the purchase price of the Barnes & Noble College division at the same time that it offered B&N a dignified manner to capitulate to Microsoft in some very nasty and expensive patent litigation. A win-win, as it were.

Barnes & Noble’s chairman Len Riggio has proven himself a skilled player in both the boardrooms and the courtrooms of America. Microsoft has repeatedly proved itself an extremely wealthy chump. Don’t let these players play you for a fool by pretending that the money they toss around has much to do with their day-to-day business. There are other games afoot and some masters at work.

May 13, 2013: A report in the credible Insider Monkey splashes some pretty cold water on the rumor du jour. So how about a quick recap: On May 8 TechCrunch said it had obtained “internal documents”. Pretty specific internal documents. For example “the documents [TechCrunch] has seen values B&N at $1.66 billion.” Yesterday “we at Insider Monkey received word from a highly placed source inside Microsoft Corporation…who said that the story was only a rumor.” But it wasn’t a “story” per say, it was a report on a set of documents that were seen by two reporters at TechCrunch. Are we to believe that someone forged documents in a manner convincing to two tech reporters (and presumably their editor)? I imagine that the documents were real, but represented a plan recently considered that has subsequently been revised or abandoned.

There are several stories here. I could waste a little ink on how often these days unconfirmed reports get magnified and broadcast by a page-view-hungry media. But this only happens when a story is in play. Barnes & Noble is in play. You might even say Barnes & Noble is a playful company: it makes so many plans only to soon change them or lose interest. But Microsoft continues to hold the #1 High-Tech Attention Deficit Disorder Award, as it has for many years. This is a company that has played with and discarded more technologies than Carter has Little Liver Pills. Remember it has already commanded and abandoned the ebook business in the U.S. between 1999 to early in the new century.

Stay tuned. Another raft of unconfirmed reports and internal documents sighted just ahead.