The deal announced this morning between Barnes & Noble and Microsoft is one of the more curious tech deals of the past decade. It’s weird because it begs us to condemn it: two losers stumbling to the altar without bridesmaids or witnesses. Wait, there’s not even an altar: this is a city hall marriage; the certificate duly issued, the newlyweds declining to spend even their wedding night in the same bed.

Worse still it’s a marriage of the Hatfields and the McCoys. They were feuding something nasty, and if they hadn’t exchanged vows they were about to exchange bullets.

OK. Enough of the marriage metaphors.

Let’s get a few easy things out of the way so that we can try to untangle some real stumblers.

$300 million from Microsoft. Spare change, sir? I’ll look at the meaning of the number in more detail tomorrow but it’s essentially meaningless from Microsoft’s perspective. As we get deeper into the details tomorrow you’ll learn that the deal is in fact sort-of worth $600 million, but that’s over several years, so again, inconsequential. 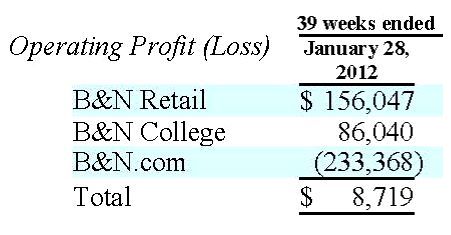 Skip to the end of the official announcement and you find out what $300 million really means to Microsoft. Barnes & Noble gave Microsoft something it desperately needed: an agreement to honor (and pay fees on) Microsoft’s key anti-Android patents.

What does $300 million mean to Barnes & Noble? I can take that in a few directions. I could, for example, mention the $204 million the company received from Liberty Media last August and then point out it’s in worse shape today – by all the usual financial metrics – than it was before it received the investment. The most recently-disclosed financial data from Barnes & Noble shows an operating profit through Q3 of $242 million – before the online operations wiped it out. Will $300 million “save” Barnes & Noble? Of course not.

The next task is to parse this morning’s joint press release. It’s surprisingly sparse. Without the boiler-plate text it’s just 600 words long – $500,000/word.

The deal is a “strategic partnership” – not an acquisition, nor a joint venture. Microsoft is making a $300 million “investment”, but not in the publicly-traded corporation named Barnes & Noble Inc., but in a “new Barnes & Noble subsidiary” with the name “Newco” (“Newco” is a standard placeholder designation for an as-yet-unnamed corporate entity).

“Newco will bring together the digital and College businesses of Barnes & Noble,” the press release continues (emphasis mine). Few if any commentators today could be heard pulling their hats off and scratching their heads and saying: “What’s that you’re saying? You’re taking Barnes & Noble’s most forward-facing division, the online and Nook group, and adding in its dullest, most staid and least digital business, the College group? Um, why are you doing that?”

Oh wait, there’s an explanation in the press release:

The inclusion of Barnes & Noble’s College business is an important component of Newco’s strategic vision. Through the newly formed Newco, Barnes & Noble’s industry leading NOOK Study software will provide students and educators the preeminent technology platform for the distribution and management of digital education materials in the market.

That just doesn’t ring true. Barnes & Noble’s Nook Study ain’t leading any industry, least of all digital education. It’s what we analysts call a dead-in-the-water no-show, for lack of a more straightforward term. And I heard zero today to clue me in as to anything that would change that.

I analyze Barnes & Noble’s college operations in my new book.

The college business essentially consists of long-term management contracts on behalf of colleges and universities around the U.S. – 641 stores (as of January 28, 2012). They operate as college bookstores do: sell and rent textbooks, emblematic apparel and gifts, computer products and convenience and café items. Barnes & Noble College is a well-run operation that competes primarily with Follett, an old family business with lots of history. The two companies are like Macy’s & Gimbels (although Follett manages 50% more locations than Barnes & Noble). The division is profitable, though not dramatically so.

More tomorrow. But let me leave you with a inspiring haiku-styled poem, formed from the remainder of this morning’s press release: