The upside of predicting a downturn in the economy is that eventually you’ll be right. The downside is that while the party’s still in full swing you’re just the grouchy guy in the corner, scowling at the other guests.

I’ve been calling for the current stock market sell-off for a couple of years now, and if you’d listened to me you would have missed out on at least a 20% plus gain in your investment portfolio. But this market “correction” is surely overdue: there’s only so long that people are willing to pay $225/share for a company that makes overpriced cameras masking as smartphones (or is it overpriced smartphones pretending to be cameras?) before somebody blinks, or some bad news pops. Apple shares are down 30% from their recent October peak; the much-lauded trillion-dollar-plus company is now worth roughly $800 billion. (September 12, 2019: Back to a trillion. August 19, 2020: Two trillion.)

So are stocks a bargain right now, or, if you sell this week could you be protecting yourself from a further drop of 10 or 20 or 30 per cent? It’s your call.

The stock market isn’t necessarily a proxy for the broader economy. Stock markets often move independently of other economic trends. It just that the current market swings are the broadest we’ve seen in a while, which got me thinking about where the economy is headed. At what point does the economy blink the way the stock market is blinking? In other words, when does the broader economy return to a recessionary state, last seen a decade ago, and how will that impact the publishing industries that I follow on this blog. 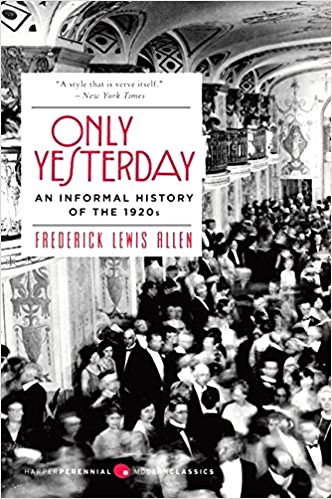 I’ve been re-reading Frederick Lewis Allen’s excellent Only Yesterday: An Informal History of the 1920s. Published in 1931, just after the events described, Allen’s insightful book reads as if he had the benefit of  years of highsight in preparing his account of a decade “when dizzying highs were quickly succeeded by heartbreaking lows.” It’s particularly fascinating to be reminded that the stock market crash of 1929 was preceded by numerous ups and downs of the indices, often just days apart.

In this decade some 90 years later we’ve been enjoying the dizzying highs, yet few lows. How much heartbreak are we facing in the next round? Or maybe things will be OK; it could be just a blip. Maybe this time it’s different.

Call me a contrarian: I collect bad reviews of the economy. I’ve got a folder called “Next Recession” nested in a broader basket I call “Current Economics.” Fifty clippings are contained within, with titles like “Another Economic Downturn is Just a Matter of Time” and “Here’s What Could Make the Next Global Recession Even Worse.” Many date back to mid-2017. Those are nearly all optimistic, stating that a recession is nowhere in sight. In early 2018 the forecasts remained sanguine, most predicting that we’re in the clear at least into 2020. In a May economist roundup by the Wall Street Journal the consensus was also 2020, with nearly a quarter of the group looking out to 2021. John Mauldin’s May survey of “seven smart market thinkers” suggested less optimism, with an average prediction for recession in the second half of 2019. But an October article on CNN puts the recession two years out, to the summer of 2020.

The 2019 Duke University/CFO Global Business Outlook December survey of the folks holding the corporate purse-strings tallied half of CFOs expecting a recession by end of next year. Of course predictions like this can be self-fulfilling: as Peter Boockvar points out, “While the CFO’s surveyed could be very wrong in their predictions, for the sole reason that they think there is a good chance of recession coming, they will act accordingly, aka, more conservatively.” (The 2020 survey is headlined “CFOs Optimistic but Uncertain About the Pace of Recovery.”)

A FoxBusiness story published December 17, 2018 was headlined “Why the US economy will likely fall into a recession next year.” It features an interview with the chief investment strategist at Charles Schwab who actually doesn’t think we face an economic recession next year.

So there you have it. The next recession is due some time next year or the year after that or maybe in 2021.

Why am I bothering with this exercise in recession-mongering? Here’s my use case: even if the next downturn is two years away, publishers should be putting contingency plans in place now. Things could get ugly. (Postscript: Of course none of this took Covid-19 into account.)

In my next blog entry I’ll look at the historic impact of recessions on the varied publishing industries. Recession-proof? We’ll see.

Some additional recession-related predictions/analysis published after this blog post: