There’s no question that Barnes & Noble is making the right move in splitting its placid college bookstore division from its tumultuously flailing NOOK division. The only question is why the heck they merged the two units in the first place. 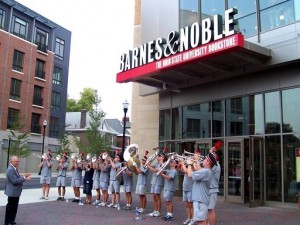 It was laughable, though treated by the press with the same solemnity accorded most large-scale public company transactions. Hey, come on, they said. Here was massive Microsoft getting into bed with Barnes & Noble. That was some hard news. Well, Microsoft slunk out of the marriage bed less than three years later and then a couple of months after the divorce the bastard Barnes & Noble siblings, College & NOOK have been separated. Surprised?

I covered the initial deal in detail in this blog post and in this one. I stand by my assertions that there was both more and less to these deals than meets the eye. I don’t think Microsoft had any real interest in a long-term affair with Barnes & Noble. Nor do I think that Barnes & Noble management ever felt that there was an operational justification for taking their already troubled digital division and merging it with an operating company that has a bunch of management contracts with bricks & mortar college bookstores, where digital is but a fraction of the revenue. Don’t kid a kidder.

But take another look at it. In the space of less than 2 years Barnes & Noble has managed to merge businesses, bring in high-profile business partners at high valuations, buy out those partners at huge losses (to the partners, of course) and then to re-divide the merged businesses. And, along the way the company has spun out such a confusing tale of digital gold and of merged and divested operations that its shares have gone through the roof. No one can accuse Barnes & Noble management of lacking finesse in the capital markets.

Just before the Microsoft deal Barnes & Noble shares were trading for about 11 bucks. They’re trading for $26 today. Just what has materially changed at Barnes & Noble in that time? The main bricks and mortar retail operation is just holding its own, sometimes looking a bit stronger, sometimes just a bit weaker. The College business also meanders along, dependent on the addition of each hard-won operational contract from a staid college finally willing to outsource one of its high-visibility operations. And the digital business at Barnes & Noble, generically referred to as the NOOK business, has dropped through the floor, incurring major losses with the fall.

So why is Barnes & Noble (stock symbol: BKS) now worth more than double what it was worth back in the spring of 2012? Beats me.