Ebook sales are falling, the Wall Street Journal reports, this after languishing sales for the past several years. We’ve seen statistical examinations of a drop in ebook sales, but this is the first article to focus in-depth on a possible cause: rising ebook prices from the big 5 New York publishers.

Anyone who shops for books on Amazon (where print books are usually priced more cheaply than its competitors) sees lots of examples of ebooks costing nearly as much as the discounted print edition (whether the paperback or the hardcover). Sometimes the ebook is, astonishingly, more expensive than the print equivalent.

The Wall Street Journal article quotes well-known industry surveyor Peter Hildick-Smith: “Since book buyers expect the price of a Kindle e-book to be well under $9, once you get to over $10 consumers start to say, ‘Let me think about that’.” Indeed.

It’s easy to pinpoint ebooks’ advantages over print books. Convenience, speed in receiving a book, adjustable font size, and, of course, cheaper. The comprehensive article about ebooks on Wikipedia points to environmental benefits, saving physical space, privacy when reading books like Fifty Shades of Grey, availability of free books, quick access to a dictionary, and the “lower cost than paper books.” Michael Kozlowski at Good E-Reader last year wrote a comprehensive listing called “eBooks vs Print – The Reasons Why Digital is Better” and notes that “many readers cite the price of ebooks as one of the primarily aspects of why they choose to read digitally.”

There are many different perspectives available on ebook pricing. Kobo issued a report called Power Pricing: Kobo Pricing Whitepaper 2014 (PDF) that, based on its own sales data, offers a conclusion providing a balanced view on pricing. “We learned there are customers for all price points, and there is a large difference between where publishers are pricing their books and where populations of customers are buying them.” 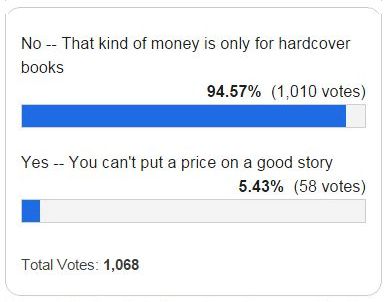 There’s a widely-read blog called Consumerist, operated by Consumer Reports. In response to the Wall Street Journal article it asked the question, “Would you pay more than $10 for an ebook?” Their readers are presumably a cost-conscious bunch but the result is unequivocal: No!

The Wall Street Journal article has drawn over 100 comments, many of them along the lines of “as ebook prices have crept up, I have significantly tamed my e-book purchases.” Others go so far as to say that even when wanting to purchase a specific title they’ll buy a different book at a lower price if the ebook is priced above $10. This indicates that authors are facing at least some lost sales when their publishers sets a high price on their books. Whether the greater revenue offsets the lost sales is near impossible to measure.

Industry observers think that high pricing doesn’t hinder sales of bestsellers. The Wall Street Journal article quotes “one high-level publishing executive” claiming “this is a title-driven business. If you have a good book, price isn’t an issue.” Similarly, a follow-up post on the Marketplace blog quotes 30-year industry veteran Ted Hill, noting that he is not yet alarmed by the drop in e-book sales. “Publishers are looking to keep up the value of their new releases by applying a tiered pricing model: full price when books are first released and discounts later,” Hill said.

Kobo backs up these claims with data. In its pricing report it takes a look at the top 100 bestselling titles for 2013, and finds that 62% of the titles had an retail price above $9.99 and 28% of the top 100 had an overall price above $12.99. “That’s a lot higher than the rule of thumb suggests is viable,” the report notes.

For my part I favor something akin to a conspiracy theory. In a comment to Mike Shatzkin’s post “The publishing world is changing, but there is one big dog that has not yet barked” I wrote:

Your commenter who found a $13.99 ebook competing with a $12.43 hardcover is part of a growing cadre who cannot help but think that publishers are not (in far too many cases) particularly interested in selling them an ebook edition. The Kindle edition of Daniel Silva’s The English Spy is more expensive than both the hardcover and the paperback. And on and on.

I’m not a subscriber to the idea that publishers are dumb. I do think that they were very emotional around ebooks when the Kindle started to gain traction. But now ebooks are just a business issue that lines up against other important business issues: author advances, manufacturing & distribution costs, and so on.

If this is correct that we have to assume that publishers are making a considered, deliberate, decision in their ebook pricing. [The Wall Street Journal article says that “To figure out how to set prices, a team of data specialists at Macmillan’s Manhattan offices in the Flatiron building sifts through a database of 74 million transactions looking for trends.”] There are only a small number of reasons why product prices might be higher than a rational market would dictate:

1. The supply is insufficient for the demand: this is not a possible scenario with a digital product.

2. Legal considerations/government requirements: the agency agreement does not address price levels, only the enforceability of retail price choices.

3. Price elasticity: publishers are finding that their overall ebook revenue is higher at current price points that it had been at lower price points: this is clearly a possibility, although common sense seems to suggest ‘nay’.

4: “Decoy pricing,” where one price is set artificially high, in order to boost sales of a second product (for any of multiple business reasons).

I believe it is #4. Price ebooks high in order to boost sales of print books.

Why do this? Because the overall success of any new title is significantly influenced by its presence in retail outlets. Depending on how you define “book retail outlets,” and how popular the title, there are some 5,000 locations in the U.S. that will prominently display proven and potential bestsellers. Within the current publishing business model this exposure is an essential part of the sales ecosystem.

If ebooks had continued to capture marketshare at the rate they were doing until a few years ago the book retail structure would now be in tatters. And established (mid- to large-size) U.S. publishers do not have a business model for dominating online sales in the same way that they can dominate total product sales with the existing retail component.

I’ll give the last word to Jeffrey Trachtenberg, who wrote the Wall Street Journal piece.

As publishers game out e-book pricing, the stakes are high for authors and agents. “I want my clients’ books to be sold for as high a value as possible, but the important word is sold,” said Richard Pine, an agent at Inkwell Management.

From Barry Eisler’s blog post on the same WSJ article: “I’ve been saying for years: the prime imperative of the Big Five is to preserve the position of paper and retard the growth of digital. They’re willing to lose money to accomplish this. They even just described it as good news.”