Two years ago at the Tools of Change conference in New York I was on a panel called “Startups to Publishing Companies Ripe for Expansion: What Are Investors in the Publishing Sector Looking For?”.

Sophie Rochester was the moderator and she offered a balanced write-up of the session soon after. Her account of how the session began unmasked me to be the only negative voice in a crowd of boosters, “McIlroy…feels it’s a very tough market. He explained that there are lots of companies looking for funding without success and believes that publishing is not a fertile ground for VCs, because publishing is not generally profitable. ‘You’re going to have to fight for the investment dollars and you may need to give up a lot more than you want to, to get that money.’” 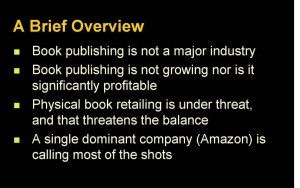 On the panel with me were two investors, Henrik Werdelin and Brian Rich, and two startup CEOs, Christophe Maire (txtr) and Valla Vakili (Small Demons).

Both investors have enjoyed some success in the publishing industry, although their portfolios are diversified well beyond book publishing. I could find only one publishing enterprise supported by Brian Rich’s Catalyst, F+W Media, the force behind Digital Book World and Writer’s Digest (and many other communities). Werdelin has been involved with Issuu and Readmill.

On the startup side, txtr.com seems to be busy, but based on the activities described on the site it’s difficult for me to imagine that it’s raking in the dollars. (Update, January 2015: txtr goes bankrupt.)

On the other hand, after attracting over $5 million in investment dollars, Valla Vakili’s Small Demons appears to have shut down.

I also pulled together a slide deck that highlights my observations, both in the slides and in the notes below each slide (you need to download the presentation to see the notes). And so, two years after that TOC session I’ve put some effort into organizing my many files on publishing startups and plotting them on a spreadsheet to see where things have gone. The news is not rosy. There is activity, just not much money being invested in or extracted from publishing startups.

I don’t think that there’s a need to suggest that the problem of publishing startups is difficult to get a handle on, as you see on this “Brief Overview” slide. I have another slide pairing, “Judging Investment Value,” and “Condemning an Investment” that try also to put the book publishing venture opportunity in context. It’s not so difficult. There are today numerous solid investment opportunities in a very wide range of industries (which I illustrate in a couple of slides). Book publishing doesn’t happen to be one of them (and if you think that’s bad, try the printing industry!).

Some people reasonably argue that we’re seeing enormous growth in self-publishing and in ebooks. This is absolutely true. It’s just that the income is spread to hundreds of thousand of self-published authors, a few aggregators such as Smashwords and Lulu, and course, Amazon.

The 2014 version of the Excel spreadsheet has been replaced by the 2017 version. It’s linked via a January, 2017 blog entry on startups.

PPS: Last November I offered a precis of Arthur Attwell’s trenchant observations on the problem of publishers and startups. A good read: his original blog entry.

PPS-2: While it’s tough to become and remain a successful publisher, and it’s tough to launch and remain a successful publishing startup, there’s a sustainable industry in providing consistent high-quality services to the many companies that are striving for gold in them thar hills. I finally found a good way to express it: “What’s always true about a goldrush is this: better to be the person selling the pan than the person panning the river.” (It’s from the February 2014 issue of Harper’s, from an article (behind the firewall) on romance writing.)

PPPS: Based on the initial response I think that a couple of quotes might be in order here:

1. An optimist is only a pessimist who has not yet heard the bad news.
— old Russian proverb