I understand why people would believe that SEO and metadata are joined at the hip. Metadata is all about making it easy to find (or to “discover”) a book. SEO – search engine optimization – is the science of making a web page more findable via a search engine. Good metadata, it’s argued, should be designed with SEO in mind.

SEO used to be largely about tricking Google and other search engines. Google’s search algorithm is based on keywords and inbound links. SEO scammers would build sites and pages crammed with popular keywords, then cross-link them so that they appeared important and popular. Google could be easily fooled. But not forever. As I discussed in an earlier post, Google fought back very effectively with two major upgrades last year.

While some of the gray players in the SEO industry are reluctant to admit it, Google and its competitors are many times more effective (and therefore less susceptible to gaming) than they used to be. These days entering even an approximation of a book’s title will produce top-of-page results. Google is clearly running multiple algorithms against new searches and manages an almost unnerving degree of accuracy in its guesswork. As a result the top SEO experts cheerfully admit that the best way to make sure your book site is found is to make it higher quality than the competition. Google pretty much knows what’s best these days; you don’t need to trick it. (Which is not to say there are no remaining tricks. They’re just not as powerful.)

The best site for books is Amazon.com. Amazon.com is best because it contains more information about most titles than any of its online competitors. In recent months Barnes & Noble has been delivering a strong showing by improving the scope of its listings. It now mostly matches Amazon with the variety of details and descriptions of both books and authors. Amazon’s most compelling advantage remains its reader-supplied book reviews which encourage a high level of reviewer and reader engagement. Just a glance at the two sites suggests Amazon is more information-rich. Industry data confirms that Amazon remains the most popular book selling site in North America, with at least double the market share of its largest competitor. 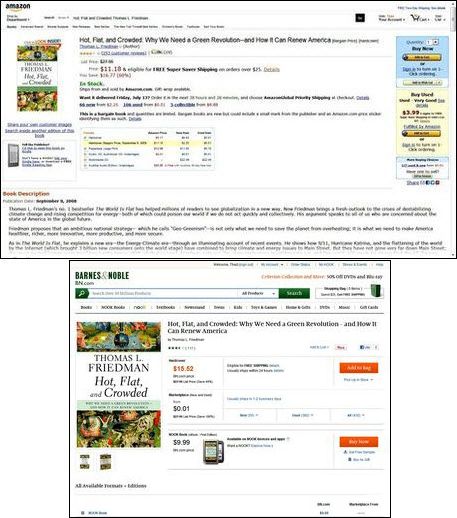 If you search for a book title on Google (Google now has 83% search market share worldwide) odds are the first entry for that title will be on Amazon.com. The second most likely site to appear is Wikipedia (if Wikipedia has a page for the title). As I discussed last month you don’t need to know the exact title. Unless it’s a deceptively common phrase Google’s algorithm can deliver an accurate guess.

So in the sense of findability, using the simple definition I’ve been exploring for that word, SEO is a moot point. No further optimization is necessary for Google to link a searcher to a specific title. The fact that Google now serves as a major conduit to Amazon, very much to the detriment of its competitors, is not a failing of SEO but rather proof of its effectiveness. Barnes & Noble has SEO problems, but most authors and publishers do not.

I’m not in any way suggesting that SEO is worthless. There are many techniques that make good sense for improving traffic to a publisher’s web site or an author’s blog. And sure, if your site is a well-calibrated sales engine, some of those visitors will click on the “Buy” link.

Some of the thinking around SEO for publishing encourages adding frequently-searched keywords to the book description text or author bio. But think about it. If you publish a new biography of Steve Jobs people will be able to find it unless you forget to mention Steve Jobs or Apple Computer on the back cover. That’s not magic.

SEO won’t generate sales for a title that no one is looking for. It’s just sound business practice as part of a professional metadata program. If you include the essential (or “Core”) metadata with your title listings Google and other search engines can perform their search magic. Your book will then be found by people who are looking for that title, or one very much like it.