In a word: Plenty.

I’ve got an overview of the music business on this site, but it touches only briefly on the vast overlap in the modern evolution of the music business and the book business. It’s a subject that could easily fill a book, but I’ve rarely seen it more than briefly mentioned. I’ve seen comparisons between music and the games industry. But not books.

Timo Boezeman and a team at FUTUReBOOK recently assembled a good 4-parter on the topic. It’s just an overview, and slanted towards The Netherlands, but it’s an excellent start. There are some solid insights into “the role of middlemen that, under pressure of the digitization, rapidly diminishes.” The strongest section looks at the differences between the digitization of the music industry and that of books.

Most importantly there’s no equivalent opportunity for book authors similar to musicians’ incomes from performances. Perhaps the top .01% of book authors can command speaking fees. Film rights sales are just as scarce. A writer that draws 30 strays to a public reading will not receive a percentage of the gate, because there is no gate. 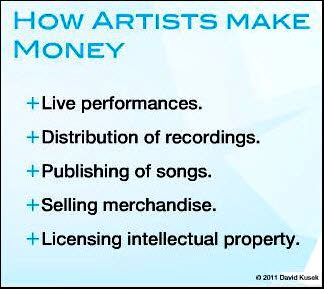 Musicians also have the still-robust medium of radio eager to promote their work. Legal online music streaming may be disrupting radio, but it’s a boon to performers.

I’ve often thought that the most important lesson that book publishers can absorb from the music industry concerns DRM – Digital Rights Management. The lesson is straightforward: DRM doesn’t work. It upsets your best customers while failing to prevent theft by the small determined group that will break any lock.

The situation for DRM in book publishing is unfolding somewhat differently than the music industry in one key aspect: enforcement. With a few notable exceptions, the book publishing industry appears not to be devoting even a fraction of the efforts the recording industry has to chasing demons.

The difference can’t be explained by the number of titles produced. Leaving out self-published books which are so long tail that many don’t leave a trace, Nielsen reports suggests roughly 100,000 new U.S. music titles per year vs. 280,000 book titles. Sure, it’s a big difference, but gross annual sales per title aren’t that far apart.

The divergence is in the concentration of sales around hits. In 2007 1,000 albums (CDs) accounted for 50% of all album sales and fewer than 10,000 albums accounted for 80% of all sales. I’ll update this post with equivalent book data, but I know it’s dissimilar.

You’ll see what triggered the timing of this post when you look at my next entry: “In an age of e-books, do we still need the bookstore?” I’m a frequent reader of the still-excellent Salon.com and last night found there Marc Hogan’s fine article “In an iTunes age, do we need the record store?” I thought to myself: How would Hogan’s article read if I just substitute “bookstore” each time “record store” appears? Surely it will seem garbled. You be the judge. I had to alter a couple of other musical references, and I increased the percentage of sales in the remaining bookstores by a factor of 10. Aside from that it runs verbatim. I had fun editing the article: I think you’ll be surprised when you read it.

Which I suggest you do soon, as I have flagrantly violated Salon.com’s copyright to prove a point. I’m going to notify Salon.com as soon as I post it, and if they ask me to remove it I’ll do so immediately. And if that happens I recommend that you perform the exercise yourselves on the original.