I do. It’s my vice. And like many vices it’s a source both of stimulation and of solace. (And, of course, as a vice, it can get out of hand.)

I blog about metadata here at The Future of Publishing, but not often, knowing that for many of my readers metadata is a subject so dull that well, you can get a sense of how dull it can seem in the note below. (*Note 2, below.)

Onix: “It is a very aggressive Pokémon…”

Nonetheless, there are many (OK, perhaps a few thousand) people who devote much (some) of their day to book publishing metadata concerns. There are a few thousand more quite interested in the topic, but spared from dealing with it as an everyday responsibility. And there is another bunch (a swarm? a murder?) who follow metadata from a distance of 30,000 feet. It is to these groups that I wish to call attention to my metadata blog.

The blog appears, appropriately enough, on the website of our book (co-authored with Renée Register) The Metadata Handbook.

I just wanted to bring the blog to your attention because, well, because not enough people know about it and I wish more people would read it. Thanks.

There are only three blogs that I’m aware of that consider metadata for book publishers.

BookNet Canada, “a non-profit organization that develops technology, standards, and education to serve the Canadian book industry” has some of the best coverage of book publishing metadata, because of their very smart metadata guru, Tom Richardson.

Bibliocloud, the powerful publishing management system, rooted in metadata, maintains a blog, though it mostly promotes its services.

Metadata consultancy Jared & Perry blogs, though the last entry is was in March, 2014.

There’s also a public Yahoo group called onix_implement. It’s “an e-forum for implementation queries about ONIX for Books.” As such it is very technical and very situation-specific.

Metadata Matters, the blog of Metadata Management Associates. The latest post, by Diane Hillmann, considers the politics of metadata in the library community.

The Metadata Discussion Group of the Indiana University Libraries is fairly active.

There is a Metadata Blog of the ALCTS (Association for Library Collections & Technical Services) Metadata Interest Group, although the last post was in May. 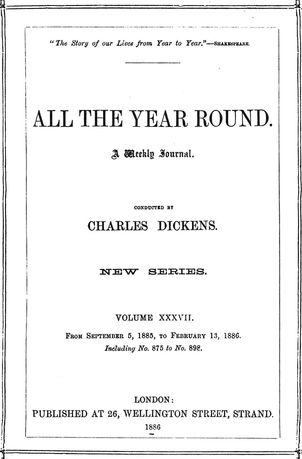 Note 2: Leave it to Charles Dickens to capture the pain of the truly dull. In October 1885 he wrote about Thomas Walker’s “threepenny weekly magazine.” It was, he complained, “so dull that it is hard to understand how it survived its first weeks at all; so dull that its decease, after a brief career of some six months, is no matter of wonder; so dull that it is, at first sight, difficult to make out why even its memory should have survived that of so much of the periodical literature which has succeeded it.”

March 20, 2016: A colleague suggested the other day that publishers feel the responsibility of creating good metadata is akin to mom saying, “Eat your vegetables!”