I last covered the topic “What Can the Music Business Teach the Book Business?” in a November, 2011 blog post. Today, in response to a fascinating blog entry on Brian O’Leary’s site I found myself revisiting the issue, leading to a comment I posted there.

Thoughts are frequently shared comparing the music and publishing businesses but there are few facts to establish the alleged close connection. Much more work could be done.

The always-astute James McQuivey notes in the comments on O’Leary’s blog that “the (book publishing) business is doing quite well in the sense that it is not shrinking à la the music industry or even the film production business.” True. While traditional publishers have replaced some 30% of their sales volume with digital ahead of print, their overall sales and profitability remains close to constant. 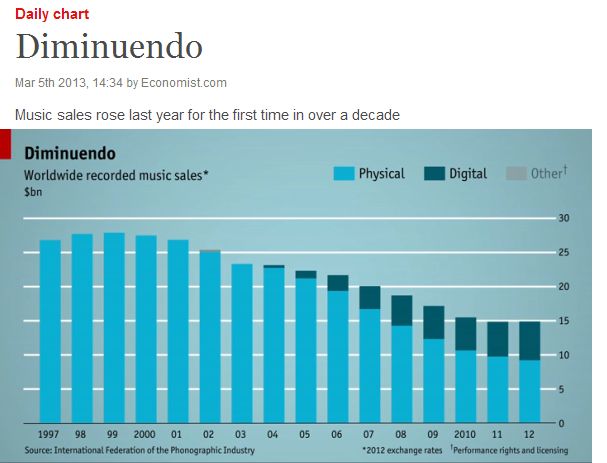 Meanwhile worldwide music industry revenues dropped roughly in half since the late ’90s, from $27b to $15b, bottoming out in 2011. In 2013 the US music industry was stable at $7 billion for the fourth consecutive year. Physical music sales still account for 35% of the total. While “streaming” models for book publishing (aka subscription models) are in their infancy, streaming is overtaking the music business. 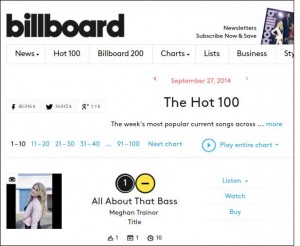 Today I analyzed the top 10 songs on the Billboard chart, noting the record labels behind them. There’s only one independent, Big Machine Records, although they have the behemoth Universal Music Group as their distributor. Here they are:

Then I checked this week’s New York Times ebook-only non-fiction bestseller list. All 10 titles are published by the big 5 New York publishers.

McQuivey responded to my comment that “the list of music labels behind the top tracks obscures one very important fact: Nowhere on the list will you find EMI, Polygram, or BMG, all of which were part of what was called the “Big Six” back when the industry was at its peak in the late 90s. Now the three you list are called the ‘Big Three.’ Even if the book publishers are still driving the majority of eBooks a decade from now, don’t be surprised if we refer to what’s left of them as the ‘Big Three,’ especially given that we’re already down one in the wake of Penguin + Random House.” I expect this will prove true.

The “collapse” of the music industry is well-established in our imaginations. It intrigues me that even after the great disruption the top players are from the same ranks that dominated the business before the collapse. Too many pundits regard disruption as some kind of purification ritual benefitting listeners & readers at the (justifiable) expense of the multinationals that dominate the business today.

So why are the multinationals still running the show?