In my first two posts in this series I looked at definitions for metadata and then at the differences between findability, discoverability and marketing. I’m going to focus here just on findability, the easy part of metadata.

A welcome exception to complexity is the term “findability” – it means just what it says, nothing more. Findability tells us if it’s easy to find a product online, whether it’s a book, a movie, a gadget, or a song.

The easiest way to find something is just using the full name of the product, spelled correctly.

But what if there are two different books or two different songs with the same name? You will then want to know the name of the book author(s) or the song writer(s) and spell those names correctly.

Let’s look at an example.

I heard a song recently on my computer that struck me as very beautiful (in “a melancholy way”). I didn’t remember buying it or getting it from a friend. I looked at the metadata in Winamp and in the file properties. Here’s what I found: 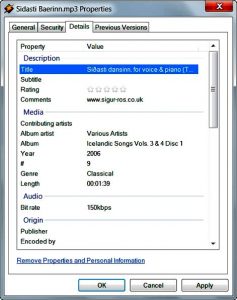 I wanted to hear more songs from this collection. The album is listed as “Icelandic Songs, Vols. 3 &4 Disc 1.” I can’t find many online listings for that CD. No one seems to have a new copy, and few vendors have complete track listings, let alone song samples.

The title showed up on an Amazon search, but when I clicked on it the link was to “Glee, Season 1, Volume 2”. Who knows exactly how that happened. But Glee was definitely not what I was listening to.

I managed to find a few listings for the CD, pictured below. Information was scant, but I found all the track listings on one site. Every single track on Volume 3 and Volume 4 of “Icelandic Songs” is for both voice and piano, and the music I have is instrumental only, no voice. 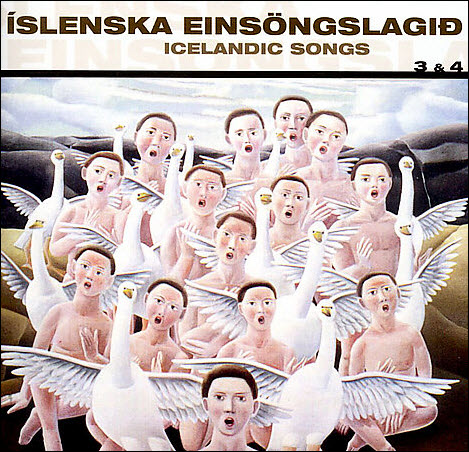 Sigur Rós’s website receives a credit in the “Comments” field. That rang a bell: I’d recently downloaded several free songs from the Sigur Rós site. That must have been one of them. I returned to the site and found lots of sample songs for free download. I listened to them one by one. They were all much larger files than my beautiful short piece and none of them resembled it nor had the same name. 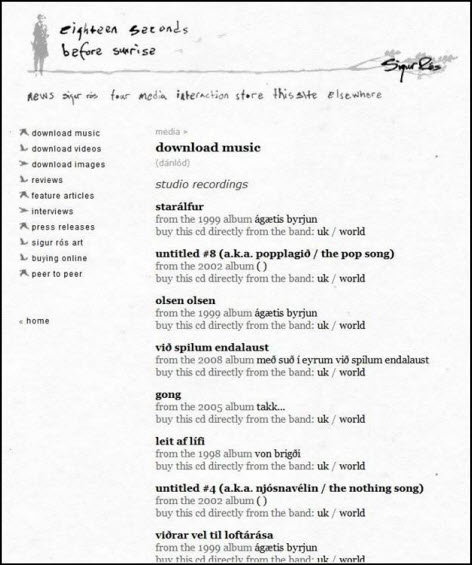 So this is a case where findability is an apparently insurmountable problem. The wrong metadata had crept into the file and now I’m just out of luck.

Contextual Pricing, a McGraw-Hill professional title, has four authors. They are given equal billing on the cover and share equal credit on the copyright page. Therefore all four authors should be included whenever this title is listed. McGraw-Hill’s online catalog gets it right: 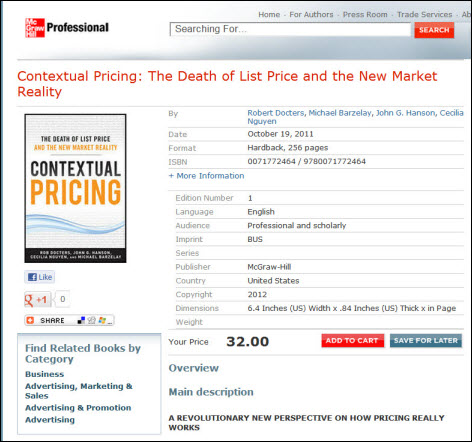 But something went wrong by the time it got to the Sony Reader Store (for ebooks). Only the first two authors were listed. 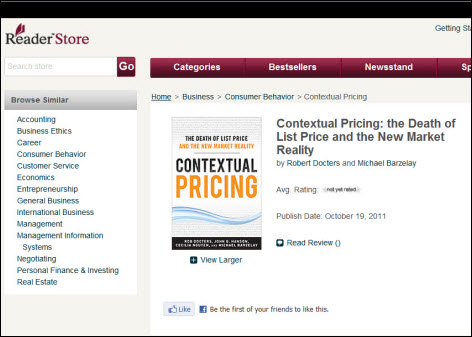 A similar problem appeared when I searched the book at the Toronto Public Library. Not only were half the authors dropped from the listing, but Michael Barzelay had been demoted from co-author to “contributor”. 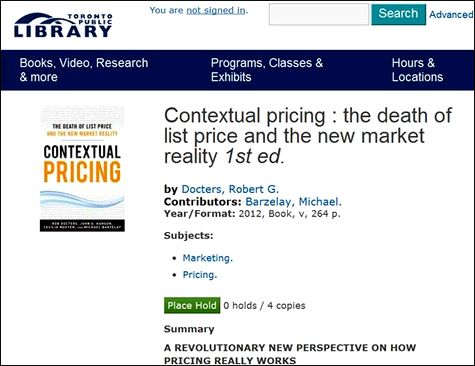 We’re going to have to assign this to CSI: Metadata!

My next post in this series will zero in on the intersection of search and findability.

June 12: I should have been more explicit regarding the example of Contextual Pricing, above. The impact of dropping the names of the two other contributors, as expected, is that a search for either “John G. Hanson” or “Cecilia Nguyen” on either the Sony Reader Store or the  Toronto Public Library web site produces zero results, as this book is the only volume to which either author has a published contribution. As far as those two sites are concerned, neither author exists. Missing metadata made them disappear.