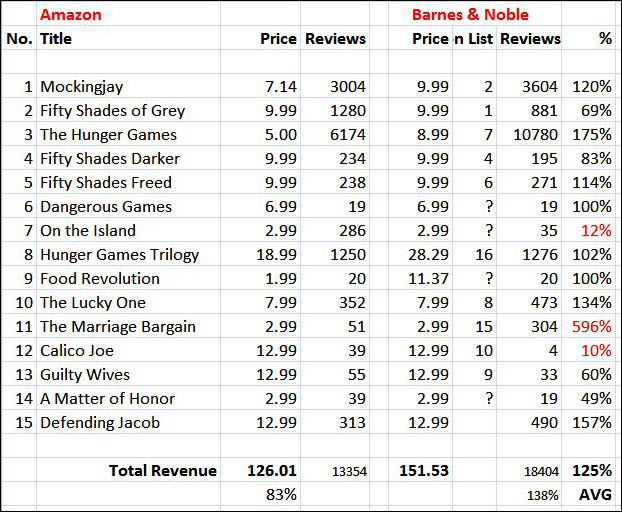 The 15 titles listed on the chart above are the top sellers on the Amazon Kindle store as of about midnight PDT on April 12, 2012. I’ve listed the retail price followed by the number of reviews received.

The next correlate to bring into the equation is Barnes & Noble’s ostensible ebook market share relative to Amazon. The going guesstimate for Barnes & Noble is a 27% share. Barnes & Noble is the source for that number: CEO William Lynch used it last year in an investor presentation. 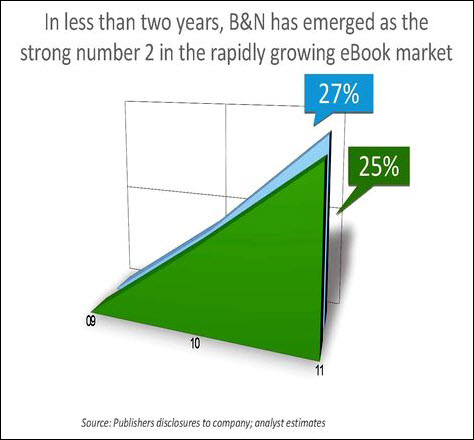 Let’s accept that a quarter of ebooks are currently sold through Barnes & Noble. It sounds about right. The tougher number to pin down is Amazon’s share. That’s best calculated deductively. What’s Apple’s share? Google’s? Sony’s? Kobo’s? Apple apparently hit a high point of 13% soon after the iPad was launched but has been dropping steadily since. Just about everyone agrees that Apple is paying little attention to the iBookstore, its neglect rivaled only by Google’s and Sony’s child abuse. Kobo is a scrappy international player generating strong internal sales numbers but since Borders disappeared doesn’t have a doting parent in the U.S. market.

I feel like I’m treading on solid ground when I award Amazon a double over Barnes & Noble, or 54% market share. That leaves 19% for everyone else which these days seems generous.

Now return to the chart at the top of the page. The area of interest is the number of reviews received on each site for the top 15 bestsellers as reported by Amazon (their sales position mapping pretty closely on the B&N list).

On average Barnes & Noble has 25% more reviews per bestseller than Amazon; 38% more overall on the 15 bestselling books.

I was surprised. I’ve been plotting these percentages informally for the past six months and Barnes & Noble’s review totals never approached Amazon’s. Amazon is renowned for its well-evolved book review ecosystem – it’s even the subject of academic study. Amazon turns the mere act of reviewing into an ego boost and a potentially prestigious career move. Reviewers actually compete on Amazon. Authors have been apprehended gaming the system and entering grudge matches. When you review a book across the digital road at Barnes & Noble all you get is an auto-generated “thanks”.

I pulled a representative sample of comparative review counts of older titles: 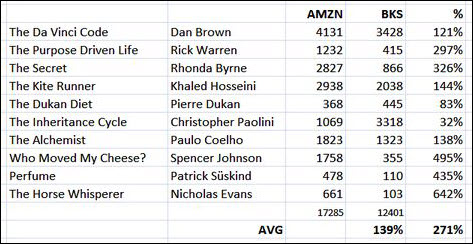 Using Wikipedia’s listing of bestsellers I extracted ten titles published in the last 30 years and compared the number of reviews on each site. In this sampling Amazon was the clear victor with 171% more reviews than the competition (or a cumulative 39%). I think this is a more representative view, reflecting the kinds of percentages I’ve been familiar with in the past.

The main weakness in my 15 current bestsellers comparison is accommodating “The Hunger Games Factor”. Barnes & Noble launched a promotion to coincide with the release of the film last month, betting it would be a winner. Barnes & Noble won its bet: the film has already grossed over $300 million while scoring 85% on Rotten Tomatoes. But Amazon has been fighting back in its typically subtle manner, cutting prices by as much as 44% (and free to borrow for Prime Members). Despite the counter-attack, Barnes & Noble is acing the review count.

Also worthy of note is the predominance of romances in this week’s top 15. It’s widely and correctly believed that one of the subject niches where Barnes & Noble has climbed ahead of Amazon is romances. OK, so they have. But it’s not like romance is an obscure category. Barnes & Noble wisely focused on one of the top three or four categories for ebooks (the others include science fiction, mysteries and thrillers) and is reaping the reward. For comparison let’s look at the manly world of business books, or as Halley Suitt once called them, “bodice-rippers for boys“. 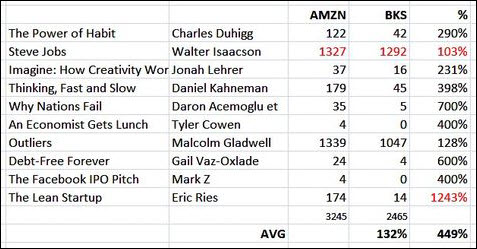 You can play this game at home by downloading my spreadsheet (.xls) or making your own.

What to conclude? The data tells me that Barnes & Noble is competing more successfully with Amazon than most estimates reflect (my own earlier figures included). If that’s true then let’s try on one of two conclusions:

The choice is yours! 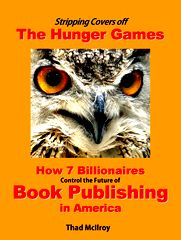