In The Wall Street Journal today the ever-reliable Walt Mossberg reviews the first Google Chrome computers. Of course the first version ain’t very good, and they really screwed up on the pricing. But it is the future (or part of it, anyway).

The theory is completely credible: Browsers now support all of the core functionality of desktop computers (directly or via “the cloud”). The cloud provides unlimited storage. Therefore the only software you need on your computer is the browser.

Yes. True. But you also need an always-on, high-speed, secure and reliable Internet connection. FAIL! One out of two does not a new computing paradigm make. We’re ever-so-close on the first, and miles away from the second.

But don’t let that obscure the new power of the browser. If you haven’t yet switched to the Google Chrome browser and Gmail-based email, you are failing to comprehend the future of computing and the future of publishing. Full stop. “I’ve got Firefox,” my friends will say. “Nope,” I respond. “It’s second best, but nowhere near good enough. Only with Chrome and only with integrated email services will you get it. Trust me.”

Switching to Chrome is not momentous, but it’s a change, so don’t do it 5 minutes before an important presentation. But do it ASAP.

Once you make the switch you’ll understand why apps generally are overrated and the publishing app is dead. If you can do so much within a single app called a browser, why would you download and “learn” dozens of apps? They make sense on cellphones and for the time being on tablets. They’re just silly toys on real computers. 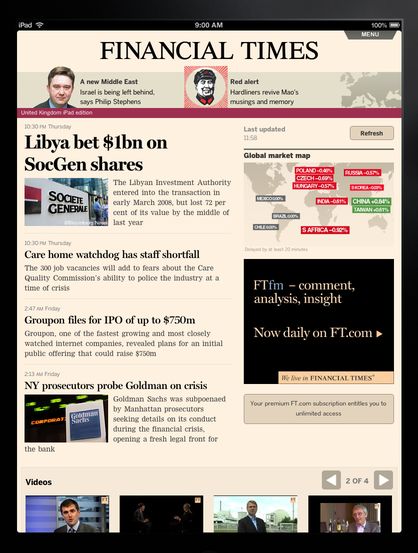 Apps have the same code overhead as browsers, and so are untenable both for developers and for users.

Yes, they do. But a browser that’s trending towards full HTML5/CSS3 support is nearly as rich programmatically as most publishing apps. Sure, the business model demands greater ingenuity. But that surely is well-balanced by keeping Mr. Jobs from interfering with your business.

June 24: For another take see Can OnSwipe convince media to go web instead of app?

June 30: I wrote above that apps “make sense on cellphones.” I believe that they only makes sense on cellphones. Right now if you want to get half-decent content onto a cellphone you essentially need to have an app (most sites aren’t mobile-optimized, so most users don’t bother checking them on the cellphones).

The reason that apps work on cellphones is that they are well-optimized for cellphones ‒ there’s less data overhead than there would be for most browser-based content. And that’s important because the data download on most smartphones is still painfully slow ‒ nowhere near as fast as advertised.

But make no mistake: smartphones are fast becoming the #1 publishing platform in North America. Data released today by Nielsen confirms this: “55 percent of those who purchased a new handset in the past three months reported buying a smartphone instead of a feature phone, up from 34 percent just a year ago.”

June 30, Part 2: Separately today, in the second part of a very good June 7th Jeff Bezos “interview” he noted that “…with the average phone that people have and the average cellular connection that people have, the mobile browsing experience is still a pretty marginal one. That is going to change. Pervasive wireless bandwidth is going to continue to increase and the form factors of the phones, the displays, the battery life. Smartphones are going to get smarter, they’re going to get better. They’re going to be unbelievably good at web browsing…”

I don’t read those remarks as necessarily an endorsement of the browser over the app but rather as an acknowledgement of the current mobile bandwidth challenge and of the promising mobile future.

Published May 26, Nicholas Hall: “Every publication that has built a native app to deliver their content has wasted money they can’t spare.”