I was on the Audience Development magazine website tonight, led there once again by Bob Sacks, and found an interesting piece of news about magazine circulation…which will appear on my next post (such suspense!).

This post is about CAPTCHAs. Did you know that CAPTCHA stands for “Completely Automated Public Turing test to tell Computers and Humans Apart”? CAPTCHAs usually require entering difficult-to-read alphanumeric text. This site uses a very simple MAPTCHA, the mathematical variant, because my astute Webmeister, Elia Kanaki, convinced me that it doesn’t have to be fancy to be effective. I still get some spam, but it appears to be generated by humans.

The most recognizable CAPTCHAs come from reCAPTCHA. 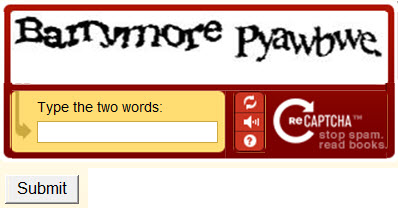 If they’re too difficult to see, or too long to bother, you can just keep clicking until an easier one appears. 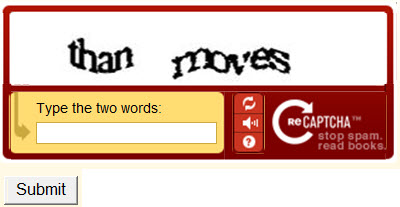 But tonight I ran into a new CAPTCHA that made me LOL (laugh out loud). 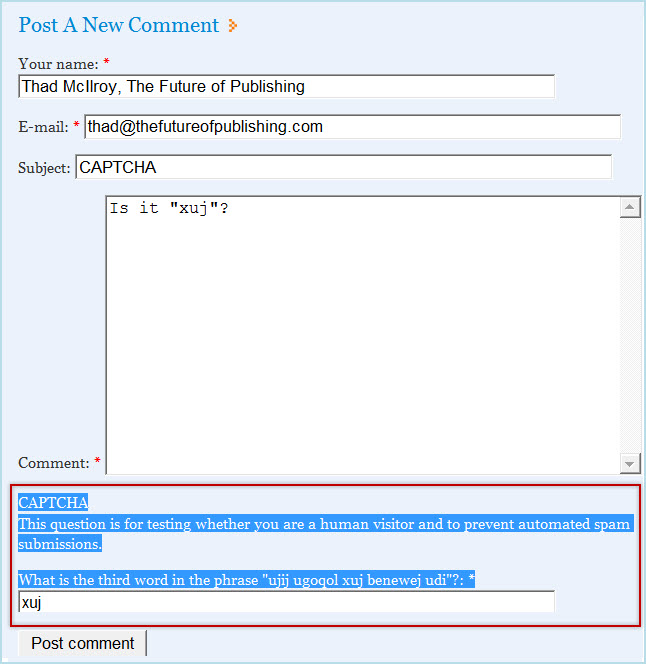 That’s not a word! I assumed everything was garbled, some kind of programming error. I tried it on two more entries.

What is the third word in the phrase “sahiqu boso poy enub won”?

None of my comments were acknowledged, and none appeared on the site. So of course I went googling and learned that for sites built with the open source DRUPAL software, this is a standard CAPTCHA format. So I guess the folks at Audience Development still moderate the comments even if the CAPTCHA is entered correctly (I do too). They’re going to be scratching their heads tomorrow morning when they see my goofy comments.

I’m glad that Elia talked me down from getting too fancy with my CAPTCHA. Once you get onto the path of paranoia about too many spam comments, there’s no stopping. On the DRUPAL site one distraught programmer comments on an early version of the DRUPAL text CAPTCHA “I am working on it to make it harder, e.g. ‘what is the third character of the second word of …’, and more difficult questions.”

The CAPTCHA continues to evolve over at reCAPTCHA.

Cute, no? Try programming an automated spambot for that one, you evil spammers!

But meanwhile the days of the CAPTCHA are dwindling, as the era of social networking overwhelms us.

Sites increasingly rely on third-party social networking log-ins to confirm your identity, and presumably over time, to tie a tweet or a Facebook favorite or some other loathesome false flattery with one’s attempt to post a comment.