This blog entry was prompted by a contemporary cartoon strip about book burning.

This led me down a long road of inquiry, first into the history of book burning, then over to Ray Bradbury’s wonderful 1953 novel Fahrenheit 451. Although most associate book burning historically with Nazi Germany, it does have a much longer history. But for many of us Bradbury’s book (and François Truffaut’s 1966 film adaptation) resonate most strongly when book burning is mentioned.

The story of the novel is a book in itself, Match to Flame: The Fictional Paths to Fahrenheit-451. The publisher explains that “Ray Bradbury didn’t sit down one day and decide to write his classic novel Fahrenheit-451. As with Something Wicked This Way Comes Bradbury’s tale of censorship had its roots years earlier—in at least 9 short stories or novellas,” all of which are included in this $100 limited edition (two of them previously unpublished).

Bradbury himself offers different versions of the origins of Fahrenheit 451. There’s a lovely brief interview on his website. In the introduction to the comic book version of the book (see below), Bradbury augments the tale from the video:

It is only now, some fifty years after that L.A. police officer challenged my right to be a pedestrian, that I see the odd ideas that rose to perform in short stories, which went unnoticed as I wrote them.

I wrote a tale about the greatest fantasy authors in history being exiled to Mars while their books were burned on earth. That became a story called “The Exiles.”

I wrote another tale, “Usher II” in which my hero complains that he, as a fantasy writer, is rejected by the intellectuals on earth who make fun of the grotesques that sprang up in the tales of Edgar Allan Poe and other similar authors.

And years before that, I published another novella, called Pillar of Fire, in which a dead man rises from the grave to reenact the strange lives of Dracula and Frankenstein’s monster.

All of these stories were forgotten when I first wrote Fahrenheit 451. But they were still there, somewhere, percolating in my subconscious.

Another story, related though tangential, is of the visual inspiration the book has offered to the cover designers of its many editions. There are hundreds. One designer, Mikey Burton, revisualized a fascinating series of cover designs as a school project, all viewable here.

There is also a comic book version, authorized and introduced by Bradbury.

The Wikipedia entry on the novel states that the cover second from the left is the original design although Bookscans reports that the third cover was the original, and also the 41st title originated by Ballantine Books, founded the year before. The paperback cost 35 cents. There was also a $2.50 hardcover edition, which searching further afield, I see can be purchased, signed by Mr. Bradbury, for just over $4,000. It was indeed published with cover #2. 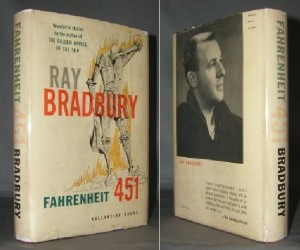 This same search revealed that there was a limited edition of 200 signed copies, one of which sold recently at auction for over $15,000. The auctioner’s site provides yet another tale:

The irony of this particular book being bound in asbestos is delicious: a book concerned with burning books (and the free exchange of knowledge and information they represent) that is itself resistant to destruction by fire. Bradbury must feel a great sense of pride in such an irony. For a long time, Fahrenheit 451 was the only genre book ever to be bound in asbestos, and it’s still one of two to hold that disctinction. In 1980, Stephen King ordered a limited number of copies of his novel Firestarter bound in asbestos as a tribute to this particular release of Fahrenheit 451. 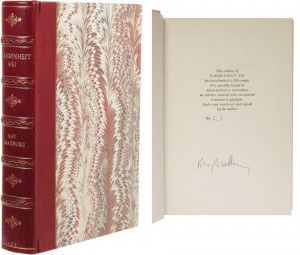 Complementing this amusing footnote is another snippet from the Wikipedia entry:

The number “451” refers to the temperature at which book paper combusts. Although sources contemporary with the novel’s writing gave the temperature as 450°C (842°F), Bradbury is believed to have thought “Fahrenheit” made for a better title; however, in an introduction to the 40th anniversary edition of the novel, Bradbury states that a person he spoke with at the local fire department said “Book-paper catches fire at 451 degrees Fahrenheit”.

The “sources contempory”–only one is actually provided–were/was incorrect. According to UNESCO’s publication, Main Principles of Fire Protection in Libraries and Archives, paper does indeed ignite at “approximately 232°C.” Still, different types of papers ignite at different temperatures, as noted in WikiAnswers:

However the same entry concludes:

Amusingly, the actual book, Fahrenheit 451, is not available in eBook form! 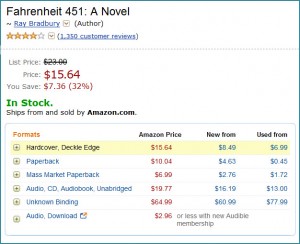 Nor are any of his other books available for digital erasure. I’m not going to research why not, whether it’s a Random House decision, or a Ray Bradbury bias.

eBooks would have frustrated the Nazis.

And an updated Fahrenheit 451 might be titled Amazon.com Server Crash Vandals.