The issue of privacy, confidentiality, identity theft and…what else am I forgetting…has been haunting the public since long before the web. The web’s capacity to amass truly vast amounts of identifiable personal information, both on a voluntary basis and on a surreptitious one, has greatly heightened concern about these issues. A number of stupid, careless and sometimes greedy folks have managed between them to make the public angry. And so the public now demands action, and Facebook has become the lightning rod galvanizing the energy surrounding some serious, legitimate concerns. (There’s lots of coverage of Facebook’s security faux pas around the web. A recent summary appeared on Huffington Post.) In a blog entry last October I described a recent report revealing that our collective disdain for vendor privacy abuses had stretched the limit. Most people no longer favor tailored advertising, once thought to be the web’s golden goose.

Last week Canada’s Globe & Mail surveyed its online readers with the question “Are you considering quitting Facebook?” (The Globe & Mail is a mainstream newspaper, “Canada’s New York Times,” so the poll reached a broad public, rather than a swarm of social mediaphiles. 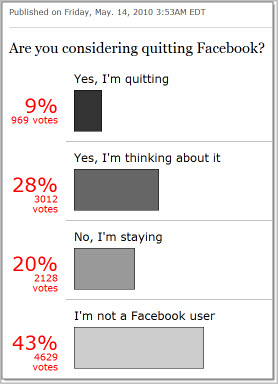 Leaving out the 43% who are not Facebook users (confirming my assessment of the Globe & Mail reader demographic), 65% of those polled who are Facebook members currently are thinking about or definitely planning to quit. Well done Facebook!

And now The Canadian Press news service reports a new site that viscerally demonstrates how vulnerable Facebook’s users are to having potential indiscretions uncovered. Called openbook, the tagline for the site is “Facebook helps you connect and share with the people in your life. Whether you want to or not.” Openbook even suggests embarrassing words and phrases you might want to search on, such as “cheated test, “don’t tell anyone,” “rectal exam,” and “HIV test.”

A search under “HIV test” reveals a user (nameless here) who graphically reported seven hours ago “And another thing I just a blood test done Im HIV+ so thanks who ever gave me that shit asshole.” Perhaps this user doesn’t care if the whole world knows. Most people would.

Yes, the stupid, the careless and the greedy are threatening the future of publishing via the web. Once the legislators are goaded into action we’ll all face publishing restrictions that should be reserved for the few.