The big battle of the week has been brewing all year: Steve Jobs and Apple versus Adobe and its Flash technology (acquired when it bought Macromedia in 2005). We have seen a few skirmishes in the last months, but now it’s war. Earlier today Jobs posted a 1,700 word missive explaining in extensive detail why Apple does not and will not support Adobe Flash technology.

Apple has a long relationship with Adobe. In fact, we met Adobe’s founders when they were in their proverbial garage. Apple was their first big customer, adopting their Postscript language for our new Laserwriter printer. Apple invested in Adobe and owned around 20% of the company for many years. The two companies worked closely together to pioneer desktop publishing and there were many good times. 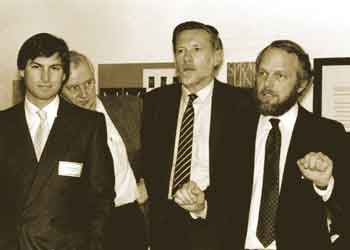 Steve Jobs, Unidentified, Chuck Geschke and John Warnock “shortly after the launch of the LaserWriter.” (Photo appears on Adobe’s website; perhaps not for much longer.)

I was working in the industry in those happy days. Steve Jobs was at one point very close to Adobe’s founders, John Warnock and Chuck Geschke. Ah, but times have changed since then. Jobs continues:

Since that golden era, the companies have grown apart. Apple went through its near death experience, and Adobe was drawn to the corporate market with their Acrobat products. Today the two companies still work together to serve their joint creative customers – Mac users buy around half of Adobe’s Creative Suite products – but beyond that there are few joint interests.

I won’t repeat the technical arguments in Jobs’ essay – they’re easy enough to follow in the original. I’ll jump instead to the conclusions, which Dale Carnegie (“How to Win Friends and Influence People”) would not approve of:

Flash was created during the PC era – for PCs and mice. Flash is a successful business for Adobe, and we can understand why they want to push it beyond PCs. But the mobile era is about low power devices, touch interfaces and open web standards – all areas where Flash falls short.

The avalanche of media outlets offering their content for Apple’s mobile devices demonstrates that Flash is no longer necessary to watch video or consume any kind of web content. And the 200,000 apps on Apple’s App Store proves that Flash isn’t necessary for tens of thousands of developers to create graphically rich applications, including games. New open standards created in the mobile era, such as HTML5, will win on mobile devices (and PCs too). Perhaps Adobe should focus more on creating great HTML5 tools for the future, and less on criticizing Apple for leaving the past behind.

I digress: my point is that there is no shortage of commentary available regarding the controversy, and surprise: some side with Apple, some with Adobe.

My favorite is by Mister Jalopy at the site Hooptyrides. While categorizing Jobs’ argument as “well-reasoned,” he notes that…

…a big chunk of his criticism could be equally applied to Apple’s own policies. For kicks I did some search and replacing:
– Replace Adobe with Apple
– Replace Flash with closed, as a catchall for Apple’s myriad of closed technology
Of course, Job’s statement is very specific to Flash technology so the search and replace is not seamless, but it does create some funny paragraphs.

I like that last sentence. Wish I came up with it.

While Adobe offers a survey on its site pointing to the “Worldwide Ubiquity of Adobe Flash Player by Version” the sad fact remains that the company makes no money from the free player. Adobe’s revenue source for Flash is software that creates and serves Flash files. Adobe reports Flash-related income as part of its “Platform segment” and in its SEC-filed financial statements for Q1, 2010, Adobe categorizes this segment as “an emerging market with high growth potential.” Yet it delivered only 5.4% of Adobe’s revenue in the quarter. As other segments of Adobe’s business mature (aka stop growing quickly) a lot more is riding on pulling revenue from Flash.

I’m counting all the early skirmishes as a single round: stay tuned for Round 3.