One of the great features of blogging is where what appears to be a single entry is in fact a combination of two, or, in this case, of three different “articles.”

My Google newsfeed directed me tonight to an interesting blog entry by literary agent Kristin Nelson titled “Is Publishing Just About To Be Disrupted?” The last comment as I write comes from Germany and notes that “as humans, we tend to think linear (sic), while social / and especially technological developments are often characterized through exponential growth.” The author includes a link to an article in German on this topic which contains the following chart, which the author notes “speaks for itself.” 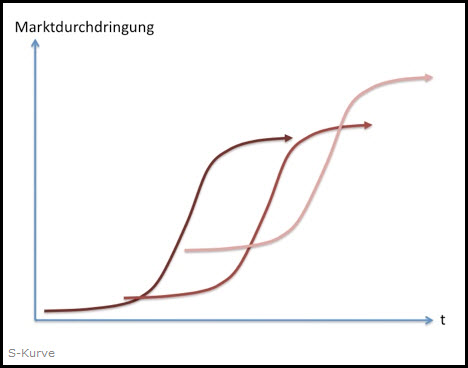 The title of the chart, not shown here, translates via Google as “Why deal with the disruption is so difficult?” “Marktdurchdringung” translates as “Market Penetration.” You’ll have to figure out “t” for yourself.

Is this chart speaking to you? Or perhaps you’ve seen charts very much like it before, and it is speaking to your memory of similar charts. Certainly this is the standard chart to illustrate the essential nature of modern technological change.

At any rate, the comment really was provoked when the blogger read the key link in Nelson’s blog, to the excellent entry by Michael Nielsen, titled “Is scientific publishing about to be disrupted?” (Nielsen is “one of the pioneers of quantum computation. Together with Ike Chuang of MIT, he wrote the standard text on quantum computation. This is the most highly cited physics publication of the last 25 years, and one of the ten most highly cited physics books of all time…”)

Like any great article, it’s about many more things than the title suggests.

Part I of the entry is titled “How Industries Fail,” and begins:

Until three years ago, the oldest company in the world was the construction company Kongo Gumi, headquartered in Osaka, Japan. Kongo Gumi was founded in 578 CE when the then-regent of Japan, Prince Shotoku, brought a member of the Kongo family from Korea to Japan to help construct the first Buddhist temple in Japan, the Shitenno-ji. The Kongo Gumi continued in the construction trade for almost one and a half thousand years. In 2005, they were headed by Masakazu Kongo, the 40th of his family to head Kongo Gumi. The company had more than 100 employees, and 70 million dollars in revenue. But in 2006, Kongo Gumi went into liquidation, and its assets were purchased by Takamatsu Corporation. Kongo Gumi as an independent entity no longer exists.

It’s a broad-ranging piece, certain to engage anyone in the publishing industries.