Shift this notion over to Spanish-language publishing and the country would be Colombia. With circumstances such as those described above, the book publishing industry in Colombia faces challenges unheard of in book publishing in the U.S. or the U.K. (The countries which bear a resemblance are Canada and Australia. I’m just back from presenting to the Association of Canadian Publishers and I’m on the way to Australia, so I’ll soon report on those countries’ publishing industries.)

Argentina and Mexico are the dominant players in Latin American publishing. Colombia is third with 9% of the market. Total annual book sales from Colombian publishers are $300 million. Book imports add $100 million. Some 200 publishers produce 16,000 new tiles per year.

The annual Bogota Book Fair, the Feria Internacional del Libro de Bogotá, operates at a scale that dwarfs the national and international book fairs most of us attend. The Frankfurt Book Fair is busier by visitors per day: 300,000 in four days. Bogota’s runs for two full weeks, pulling in over 500,000 visitors. It’s the nature of those visitors that mostly sets the Bogota Book Fair apart from Frankfurt, London and BEA: they are primarily members of the public, drawn to the lively “fair” part of the festivities as much as to the extraordinary range of books. Feria del Libro de Bogotá is a public celebration of all things bookish, and this year in particular the work of Gabriel Garcia Marquez, who was honored throughout the fair and throughout Bogota.

The president of Colombia, President Juan Manuel Santos opened the event on April 21, using the occasion both to remember Garcia Marquez and to emphasize the government’s commitment to reading and to publishing. He reiterated his goal to make Colombia the most educated country in Latin America by 2025 through additional funding and support of public libraries and of schools.

I had the opportunity to speak both at the National Library of Colombia (Biblioteca Nacional de Colombia) and at the book fair. The library is a wonderful place, “generally considered to be the oldest national library in the Americas.” A highlight of the collection: books expropriated from the Jesuit community when it was expelled from Colombia (indeed, “all the dominions of the Spanish Empire”) as a result of the 1767 order of King Charles III of Spain.

The library featured a special Gabriel Garcia Marquez exhibit, including first editions and the typewriter he used to create One Hundred Years of Solitude. Most dramatic was the citation and the gold medal Garcia Marquez received when awarded the Nobel Prize in 1982. 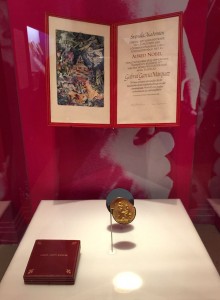 I spoke to staff and friends of the library about the future of bibliographic metadata and the potential value of Schema.org to make library resources discoverable on the open web.

The book fair featured a separate training program for publishing professionals, the Foros del Libro. Most of the presenters were Spanish speaking, leaving only Molly Barton and I to enjoy the luxury of the man in the booth in the back of the room: a live translator bringing our words to the audience in Spanish and translating the audience questions back to us in English. What fun!

I offered two presentations. The first, called “Las 11 tendencias y oportunidades en la industria editorial” I based on my December whitepaper (PDF), “11 Topmost Digital Book Publishing Trends & Opportunities.” The second, a favorite, I call Bookishness. The term has no equivalent in Spanish (given that’s it’s not really a word in English either), so they named the program “Cómo crear libros impresos extraordinarios,” Creating Extraordinary Printed Books. I think of the topic as a exhortation to rediscover, in this age of the ebook, what makes print books uniquely print.

Slides 18-22 illustrate a key point of the seminar: try to create book covers that work well in print and are dynamite online. The animated gifs don’t dance on Slideshare, but this page from Ebook Friendly offers a great selection of this new art form.

Bogota is a wonderful city to visit with or without a book fair. Add in springtime’s Feria Internacional del Libro de Bogotá and you’ve got a great reason to begin an exploration of Colombia.