There’s money to be made in dying industries, that’s for certain.

Case in point, Cenveo Corporation. Last Friday, February 2nd, Cenveo filed for bankruptcy. As reported on Bloomberg, the company listed “more than $1.4 billion in debts and about $790 million in assets in its Chapter 11 bankruptcy petition…” Yes, that sounds like a bankrupt company. 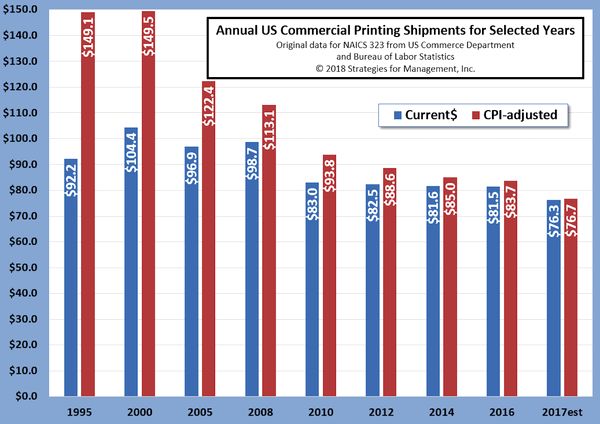 It’s been a long time coming. Cenveo has been under water since calendar year 2008 (fiscal year ending January 3, 2009), when the last of the shareholder equity turned into a $221 million deficit, on a loss that year of about $300 million.

By 2011, with a small loss of under $10 million, the shareholder deficit was $673 million. Mr. Burton received cash and stock worth $9.6 million: if he’d gone that year without pay the company would have made a small profit. By 2016, the last year where compensation has  been reported, Burton Sr. had taken a pay cut to $2.5 million, while the company eked out a $68 million profit. The shareholder deficit was slightly improved, but still stood at nearly $600 million.

All in the Family

Cenveo is a family affair. Serving under Burton Sr. is Robert G. Burton, Jr., who is president, and Michael G. Burton, the chief operating officer. In 2016 the brothers received cash and stock worth nearly $3 million between them. The Burton family is collectively the largest Cenveo shareholder. That conveys a lot of power in running the company. Yes, there’s an “independent” board of directors (with two Burtons aboard), but…

Money to be made? For example, two months before the bankruptcy declaration the board of directors of Cenveo announced a new compensation plan for 2018. Covering the three Burtons and three other executives, the plan includes up to 125% bonuses for reaching certain (unspecified) sales targets plus a nifty 40-60% immediate cash payment based on their current annual base salary. It’s called a “retention bonus” — what, were the Burtons planning to look for work elsewhere? If I’ve got my figures right, the board of Cenveo awarded the Burton family $2.8 million while company executives were contemplating a Chapter 11 filing.*

In the 2016 annual report Cenveo noted that company shares had lost three-quarters of their value between 2011 and 2016, in the same period that the S&P 1500 Commercial Printing Index more than doubled (while the S&P 500 Index increased by 98%).**

The company employed approximately 9,700 people worldwide in 2008. There were 7,300 employees reported at the end of 2016, a 25% reduction (despite the acquisition of five companies and their employees during that period).

How could they not have seen the misery that was heading their way? The word was out about the coming challenges to print.

As early as 1998 I started warning the printing industry that the web was going to have a serious impact on print. In a January 1999 I wrote an article for eMediaweekly (PDF) called “Print is on a Collision Course with the Web”:

As we head into the next century, the web will become the dominant mode of commercial communication and the primary medium for news and entertainment. The days when print was king are quickly ending, yet large segments of the graphic arts community continue to ignore this development.

In the spring of 2000 I delivered a keynote presentation to 3,000 people at Seybold Seminars Boston on the topic: “The State of the Printing Industry In the Era of the Web.” (PDF). My warning was clear: “Print demand WILL decrease” in an industry which already had too much print capacity.

Commercial print sales in the U.S. have declined by nearly 50% since I made that presentation. I’m not claiming to be prescient. I was spotting trends that were obvious, that others had noted as well. 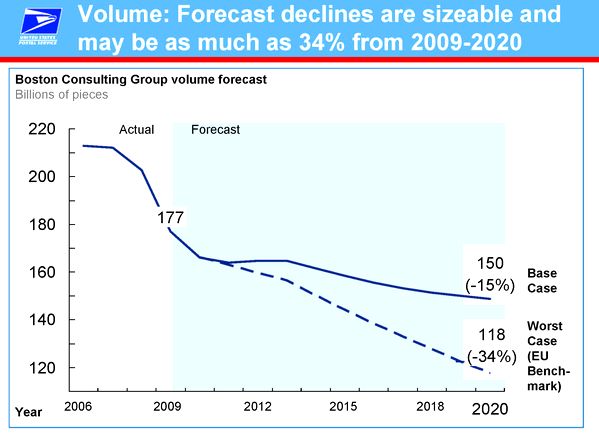 Checks Not in the Mail

Cenveo has a diversified print operation, but its top focus is on envelopes, accounting for half of sales. As recently as 2013 Cenveo was adding capacity in envelope manufacturing by acquiring the twice-bankrupt National Envelope Corporation.

Mail, of course, has been as hard hit as any other printing segment, more than many.

Dr. Joe Webb has a chart showing that in 2013 the average American received 25 pounds less mail per year than in 2000, a one-third decrease.

The United States Postal Service’s (USPS) own projections from 2010 to 2020 (PDF) included a worst case scenario with a 34% drop in volume. It also reported that first class single piece mail volume dropped by over 50% between 2007 and 2016. 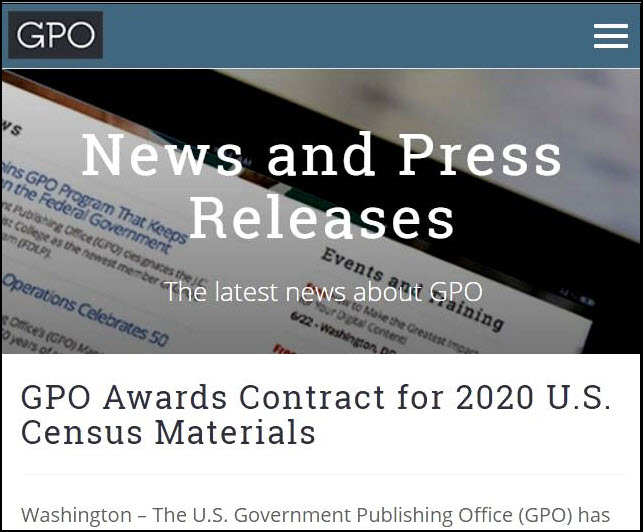 Last year, while Cenveo was technically bankrupt (if you use the old-fashioned definition of “owing more than you can pay”), it landed a plum U.S. government contract, worth over $60 million. The Government Publishing Office (GPO) awarded Cenveo the contract for 2020 Census printing materials and mailing services (“following a competitive procurement process”). Sure, Cenveo has the skills and capacity. But anyone could see the financial disaster that was lurking around Cenveo. Where did the GPO find its optimism?***

There’s much more to record about Cenveo and the Burton interregnum. I’ve been following the company for over a decade. My files cover mergers, acquisitions, hostile takeovers, leveraged debt, hirings, firings, and more. To understand the Mr. Burton Sr. story is to weave a path back to his earlier career stops at Kohlberg Kravis Roberts (KKR), Moore, World Color Press and more.

Is there a lesson here? If there is, it’s mostly about the U.S. Securities and Exchange Commission (SEC) and its primary mission “to protect investors.” I don’t feel safe. Do you?

To the extent it’s about the printing industry it’s a reminder of the often unintended consequences of new technologies. As I’ve watched the publishing industries — newspapers, magazines, books and others — reeling under the shift away from ink on paper, I’ve seen more whimpers than bangs. It’s not about the “death of,” it’s about the “decline of,” or “the repositioning of,” and what happens after the decline begins to level off and the changes are in place. What then of the tech aggressors, previously convinced that their victory would be absolute? What should we be doing as consumers? Buy that stamp, mail that birthday card?

Dying is too strong a term for what’s happening to the printing industry, as it assumes an end-point of “dead.” While the vital signs of the industry: sales, employment, number of establishments, and profitability, continue to plummet, there’s no particular reason to think that print will disappear in our lifetimes. On the other hand, as the printing industry’s most notable economist “Dr. Joe” Webb puts it, “‘Not dead’ is not the same as being ‘alive’.”

Note *: I assume that they were already at work on the bankruptcy filing in December 2017. It takes time to negotiate the complex arrangements these agreements entail.

Note**: The strength of the S&P 1500 Commercial Printing Index seems to defy the overall weakness of the printing industry. What it reflects is that many of large publicly-traded printers that comprise the index have reorganized their businesses successfully, returning them to profitability during tough times.

Note *** (February 9, 2018). Today I obtained a copy of the original solicitation from the GPO “For the Procurement of 2020 Census Printing and Mailing.” Certainly the GPO made it clear that as part of its evaluation of any bid it could request evidence of the contractor’s “financial… abilities to perform.”

PREAWARD SURVEY: In order to determine the responsibility of the prime contractor or any subcontractor, the Government reserves the right to conduct an on-site preaward survey at the contractor’s/subcontractor’s facility or to require other evidence of technical, production, managerial, financial, and similar abilities to perform, prior to the award of a contract. (emphasis mine)

On July 31, NPR reported that not only had Cenveo lost the Census 2020 contract but that “officials at the U.S. Government Publishing Office botched the awarding of its single largest contract — the 2020 census printing contract — according to a memo from the federal agency’s Office of the Inspector General.”

March 15, 2019, Crain’s Chicago Business: Court fight over citizenship question costs census printer Donnelley precious time. This is worth a read: “Drawn-out litigation over the Trump administration’s plan to add a citizenship question on 2020 census forms” is delaying the start of the project. “The Supreme Court plans to hear arguments in the case next month, and it isn’t expected to rule before June.” Donnelly bid $115 million, where Cenveo had earlier won with a $61 million bid. Donnelley CEO Daniel Knotts said they took the shortened time frame into consideration when they submitted their proposal, and that they are “prepared for the worst.” Census Day is April 1, 2020.

Disclosure: In 2010 I presented to some Cenveo staff and key customers (via a division of the company, then called “Cadmus Communications, a Cenveo Company”, now called Cenveo Publisher Services) at their Executive Management Retreat. I was paid a fee plus expenses. It was a delightful experience, full of smart, interesting people.