I do fret about the future of publishing. For all kinds of reasons. We’ve seen what happened to newspapers. And then the same thing happened to magazines (more or less). The future of periodical publishing in print is between challenging and bleak.

But that’s not to say that people have stopped consuming news. If anything they’re consuming more than ever. It’s just that print is an ever-decreasing source.

Book publishing has been somewhat “disrupted” by ebooks, although the total annual sales of the trade book publishing industry is (more or less) constant. That’s not true of textbooks, where sales have been plummeting. STM (Scientific, Technical and Medical) book sales are also declining, but not as deeply as are textbooks.

That’s sales and revenue. Clearly they are indicators of future trends. But books can be sold and not read. And books can be read though not bought new (for example library borrowing and used books*).

I keep coming back to reading. The publishing industry cannot withstand a decline in reading.

So where’s the reading data? 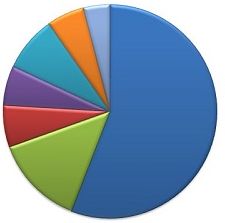 I’ve previously considered the studies from the Pew Research Center. When combined with Gallup data, the percentage of adults who have read between 1 and 10 books in the past year is relatively constant from 1978 to 2011. (Gallup updated its research in 2016 as did Pew.) I see now that both Gallup and Pew ask the reading question in a manner that is certain to garner the highest response rate: they ask, did you read a book “in whole or in part”. I’d love to see the whole separated from the part. But so be it.

These surveys seem to conflate book reading with reading generally, which surely is off target.

The one organization that doesn’t do so is the U.S. Census Bureau in its American Time Use Survey (ATUS). They ask about reading as a leisure activity, as opposed to watching tv, playing games, playing or listening to music, and so on.* Their measure is “average hours per day spent, weekdays and weekends.”

I’ve collected the ATUS surveys from 2010 to 2017. Here’s the data, broken down separately for men and women.

So there you have it: reading is holding steady, even if the percentage of people who don’t read any books, in whole or in part, is increasing. Hmm…. In my initial review of the ATUS data I thought the numbers were showing a steep decline. Nope, they’re about steady. That’s good news.

* Note 1: There’s not a lot of data on the used book market, but one study, from 2005, estimated that used books represent a hefty 8.4% of all consumer book spending.

* Note 2: Unfortunately ATUS also lists “using a computer or the Internet for personal interest” as separate from reading, when many people use the Internet specifically for reading. They also classify “reading to/with children” as a separate activity.

July 17, 2017: There’s another analysis of ATUS data here. With a longer lens it notes that from 2005 to 2015 the average amount of time spent reading for personal interest on weekend days and holidays fell by six minutes to 21 minutes per day.