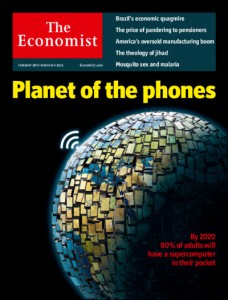 I didn’t write the headline for this entry. It’s in the February 28th edition of The Economist magazine. Smartphones are the cover story in the issue, headlined on the cover as “Planet of the Phones.”

The Economist is for me a bible of current affairs. It extends economic analysis to the crossroads with political and social trends. It’s not the most whimsical way to keep track of what’s happening but the resulting summaries are compelling.

In researching my new report, Mobile Strategies for Digital Publishing, I struggled as I accumulated mobile adoption and usage data. How could this be? I expected the numbers to be large. I didn’t expect them to be enormous — and yet still nowhere near the saturation point. “Today about half the adult population owns a smartphone,” The Economist notes. “By 2020, 80% will.”

The easiest and most obvious criticism of my report is that I’m overstating the case. Sure, mobile is exploding. But this doesn’t matter much to publishing today. Will it ever?

Book publishing has always been a lagging indicator of technology trends. Starting with the typewriter. But over time it’s turned most technologies to their best advantage. Think of the radio.

The quotation at the top is from what The Economist calls a “leader”, an introduction to a key story in an issue. It uses a comparison to cars and clocks, pointing out that “cars are more than engines on wheels and clocks are not merely a means to count the hours. Much as the car and the clock did in their time, so today the smartphone is poised to enrich lives, reshape entire industries and transform societies.”

The accompanying article, The Truly Personal Computer: The smartphone is the defining technology of the age, is a 3,000-word essay documenting the mobile phenomena, as demonstrated by the smartphone.

Apple, of course, is awarded kudos, noting that it is now “worth more than any other company in the world and just had the most profitable quarter in history.” The smartphone “has become information technology’s key product. It generates the most profits; it attracts the most capital and the brightest brains (emphasis mine).” The brightest brains. Surely the publishing industry would love to employ some of those. I’ve looked previously at the HR challenges that publishers face. The picture isn’t pretty, and the allure of Silicon Valley has never been greater.

There’s an exploding “content” play surrounding smartphones, but few of the apps are books. The article notes: “Apple’s App Store and Google Play, the equivalent for the Android operating system—which runs on 82% of the world’s smartphones, as opposed to Apple’s 15%—now offer users more than 3m apps. Apple alone sold apps worth more than $14 billion in 2014.”

Analyst Benedict Evans estimates that sales at Google’s app store are running at about 50% of Apple’s (“on roughly double the number of devices”). The worldwide app market last year was in the $20 billion range.

The article takes just a brief glance at smartphone’s impact on print media. Moving to smartphones is particular challenge for companies that have really only just caught up with the web, relying on users going to their websites. It notes that people are now “finding stuff they want to read or watch through Facebook, Twitter and, increasingly, messaging services. Snapchat,” it points out, already “hugely popular among teenagers because it allows them to send pictures that fade away after a few seconds, recently introduced a service called ‘Discover’,” offering articles and videos from CNN, National Geographic and others, which disappear after 24 hours. It says that “some publications have already concluded that websites have had their day and are now planning to distribute their wares only directly.”

What could this mean for book publishers? How will the “transformative” smartphone transform the book publishing industry?

March 8 in the New York Times: “Surge in Smartphones Sets Off New Wave of Corporate Self-Reinvention”