Everyone takes a shot at Amazon, and it’s not difficult to see why. Founder/CEO Jeff Bezos is blamed for just about every corporate crime imaginable, from pricing that destroys competition to suffocating warehouse employees on hot summer days (apparently no longer a problem).

My criticism of Amazon is about an issue perhaps more subtle, but, in my view far more serious. Amazon has destroyed the publishing industry by destroying its well-honed ecosystem. Sure, all of the other issues and criticisms stay on the table. This issue is for me the heart of darkness of our beleaguered industry.

Beware: there’s an heavy dose of data in what follows. I hope that if you stick with it you can decide whether to cheer or have me pilloried.

Looking at Growth in Unrelated Industries

Consider the auto industry. After some tough years in 2013 a recent record was set: 15.6 million vehicles sold, both U.S.-made and imports. Current projections are for further increases in 2014. Do you think that this excitement will move car companies to triple manufacturing and imports as a result?

Consider next the forest industry. The uses of wood are numerous, mostly construction, paper for publishing, packaging and household products such as tissue, paper towels and so on. After a very tough decade the industry had a good year in 2013. I think it remains unlikely that forestry companies will cut down five times as many trees as 2013 just in case sales suddenly explode.

Yet somehow in the book industry, despite a modest growth in the number of readers and the number of different titles they read, the number of new titles issued has exploded. Bowker’s very savvy Laura Dawson points out that output increased between 1998 and 2012 from roughly 900,000 active titles listed in Books in Print to 32 million. That’s an increase of 2.3 million titles per year. And as Dawson admits, many self-published titles no longer carry ISBNs because they’re expensive to obtain in small quantities and many self-publishers perceive little or no value in them. So when you add in the “non-ISBN” self-publishing rate the total titles published is even higher.

Heading Back to the Book Publishing Industry

Now to bring book publishing industry stats into focus against the two large industries above, I’ve got two charts from The Book Publishing Industry, 3rd edition (by Albert Greco et al.). The first covers title output from 1940 to 1990; the second from 1991 to 1999 (they’re large, but clickable). 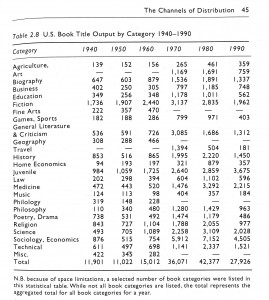 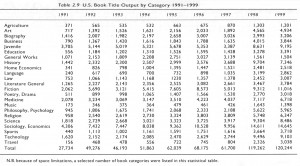 This is where my publishing ecosystem theory enters the narrative.

In 1940 12,000 new titles were published and offered to a population of 132 million (there was near 100% literacy). If one out of each 12,000 literate readers bought a copy of one of the new books each title would have earned a customer. If publishers hoped that a new title would sell on average 125 copies per year, then one in nine Americans would have to purchase a copy.

Fifty-nine years later, with a  U.S. population of 281 million, 2 people would have to purchase one of 125 copies of each of 120,000 books published. Hardly a situation that’s gone out of control.

The U.S. population is about 318 million today. Because of the missing ISBNs challenge exact numbers are hard to come by. But let’s try a few:

Based on this data there are upwards of a million new Kindle books published on Amazon each year. That’s one per 32 Americans. Except that only half the population reads books. Less than 85% have English as their primary language. 20% are 14 years old or younger. This is not your parents’ publishing market.

Before the Amazon Kindle there was a relative equilibrium between supply and demand in the American book publishing industry. The system largely functioned as designed. Sure there were some remainders. Sure there were some titles left sitting on publishers’ bookshelves that sold a single copy once every few months. But the business continued to grow. Publishing folk made a decent living, and book publishing and bookselling helped to define culture in English-language markets.

How Can Prize-Winning Books Remain Invisible?

Here’s my next datapoint. The Independent Book Publishers Association (IBPA) is a not-for-profit membership association serving the independent publishing community. Among their numerous activities they’ve offered the Benjamin Franklin Awards for print books for some time now. They recently added the Benjamin Franklin Digital Awards to honor innovation in electronic book publishing by individuals and organizations of all sizes. I’m all for it. IBPA is a good trade group and they work hard for their membership.

The books that received awards were mostly published in 2013. I made a spreadsheet of  the winners. I took each title and found its Amazon Kindle sales ranking (several of the titles also had print editions, but I didn’t include that data). Here’s what I found (rather than attaching specific sales numbers to specific titles let me offer averages): 593,710 was the average sales position of the winning titles on Amazon, varying from about 200,000 to about 1.7 million in the listings. One title, “His Dream, Our Stories” (a book commemorating “The 50th Anniversary of the March on Washington and Dr. Martin Luther King Jr.’s “I Have a Dream” speech) had hit #8,147 on the bestseller list. But it’s free. The book looks great, but free sure helps move quantities. (Two of the 12 titles were not listed on Amazon. I don’t know why. )

It’s hard to say exactly what a bestseller is on Amazon because its rating system is based on sales velocity rather than on overall sales. Gernerally speaking when I see a title at 10,000 or lower I think it a success. Once it slips below 100,000 it has usually fallen into nowhere land.

My point is simple: A reputable publishing group offers awards to some of its members’ best titles and yet can’t really move the needle on those books’ sales. If these awards can’t help sales, what can? For this I damn Amazon. Who are they trying to help besides their own ruthless enterprise? If this is how we must paint the future, I’ll take my pictures from the past. The industry’s worship of this firm makes me nauseous.

A Comparison to the U.S. Film Business

There are two aspects as to how many movies were released in the U.S. in 2013. There were roughly 150-U.S. produced films plus 725 foreign films. Let’s stay with the 150 U.S.-produced films. If you were a madcap film junkie who wanted to see every U.S.-produced film regardless of reviews, stars or subject matter, you could manage the task at 3 movies/week.

What if Amazon found a way to fund 5,000 new U.S. films each year? You’d suddenly be facing the challenge of watching 14 new films each week. How about 50,000 new films? My head spins.

I think this is the equivalent of what Amazon has done to books.

To take on Amazon’s one million books then you’re going to have to pour over 83,000 titles per month.

The industry has absolutely no way of absorbing this title output. It’s not just prize-winning authors who disappear from the radar. Let’s accept the truth: the average author doesn’t have a hope in h-ll of making more than a pittance. The remaining retail book chains continue their slow decline (and move into toys and games). College bookstores are losing single-digit volume each year. Startups are wasting their founder’s cash. Amazon has begun to turn the increased margin screw on its creative providers. Sony’s bookstore just headed over to Kobo who no longer can afford to have a U.S. prescence.

Anyone who argues that Amazon is just a logical and healthy outcrop of the capitalism and competition should just join the Libertarian Party and share their insights with like-minded individuals. It is an enormously successful dot.com, but its success is at the same time destroying the traditional equilibrium in book publishing, making the business untenable for all but a small fraction of successful players.

This is an unjustifiable debacle.