Google just announced that they will reward the authors of the very best in-depth articles on popular search topics by highlighting the top three in page 1 search results. Google offers a range of sample topics in its announcement: censorship, Gloria Steinem, Lego, the NSA, the United Nations, and Taylor Swift. I’d bet that the criteria is two-part: an unambiguous subject, one that’s in reasonable search demand. Think not only “the Bible” but also the “New Testament” and the “Old Testament.” Then “Genesis”, “Exodus”, “Leviticus” as well as “Matthew”, “Mark”, “Luke” and “John”. You get my drift.

Google’s “in-depth articles” is not a paid feature, nor one that can be readily manipulated by SEO or SEM. Google’s announcement explains that “to understand a broad topic, sometimes you need more than a quick answer. Our research indicates perhaps 10% of people’s daily information needs fit this category.” So that 10% of searchers will soon recognize that the world’s three best in-depth results can be easily spotted on page one of every search.

Anyone who uses Google for research has seen that the quality of its search results has improved dramatically since the Panda update, introduced in February 2011 (and further enhanced several times since). I find it uncanny how good Google is these days in identifying high quality information. Google’s algorithms divine the best content; they’re tough to trick. Most commenters say that if you want to be found by Google just create excellent content. It’s the only useful “trick”. When Google’s algorithm’s determine the three most in-depth and useful articles on a particular subject there’s a pretty good chance that they’ll be correct. As with Google News, human editors won’t intervene with a subjective stance.

Authors and publishers need to recognize that those three links will receive thousands of times more clicks than the other results on the page.It’s a slam-dunk opportunity to draw traffic to their writing. It’s not the Pulitzer Prize, but, over time, it could be even more valuable.

This is not about putting the entire book online. Google’s search doesn’t understand book chapters unless they each have a unique URL. The challenge for authors and publishers is to look at every single book and determine if chapters can be abstracted into articles or if segments of the book can be combined (perhaps with some additional content glue) into authoritative articles on a pressing and popular topic.

Search Engine Land, always an excellent source for understanding the utterances of the Great Wizards of Google, suggests that based on the illustrations provided by Google it will be high profile content organizations — magazines and newspapers — that are usually chosen. But Google makes it clear that it’s going to rely on its own excellent algorithms to make the choices. In a statement Google said that its goal “is to surface the best in-depth articles from the entire web. In general our algorithms are looking for the highest quality in-depth articles, and if that’s on a local newspaper website or a personal blog, we’d like to surface it.”

These won’t be ephemeral pieces. According to GigaOM, quoting a Google source, “the top 3 choices will remain relatively stable, as the feature is intended to provide the most important articles in the long term.”

(I’m not suggesting that magazine or newspaper content is inferior to the content in books. Only that books more often include long explanatory text on a single topic, more so than in most magazines and newspapers.)

The most exciting aspect of this announcement is that it will invariably drag book publishers into a more active role on the web. If content is behind a firewall it won’t make it into Google’s listings. Publishers (and their authors) will need to rethink the content of their books and figure out how to rework that content into one of the three most in-depth articles on a given topic. Sure, some of the people who read the article won’t buy the book. But exposing a good book to a massive international audience via Google’s search engine will pay off in dramatically increased sales (provided the ebook is widely available and reasonably priced).

OK, I can be excitable. But this is huge. It’s the next step toward the destiny of the Internet: to make the very best information easily available to the very broadest international audience at a reasonable price (with a subset of that information available for free). It’s bound to have an enormous impact on the sale of digital content, for all the players in the supply chain. Newspaper and magazine publishers will be further encouraged to morph their feature articles into ebook “singles” that will extend the scope of their writers and massively extend their international audience. Book publishers finally will see that slice-and-dice publishing, while not a substitute for full-length studies, is a necessary adjunct.

For textbook publishers it’s a good news/bad news scenario. These publishers publish much of the authoritative content that can be adapted into a shorter article format. And in many languages. But few readers will be moved to then purchase a $100+ textbook. Most MOOCs already source their “textbooks” on the open web. “In-depth” will make it far easier for both online and classroom instructors to identify optimal web content for their students. Textbook publishers will require a vastly different publishing model to take advantage of this opportunity. It’s theirs to grab or miss.

Self-published authors are another beneficiary. The online path from search to source to purchase will be so short that a publisher’s presence could be mainly an impediment. Time will tell: innovative publishers will surely carve out a special space. 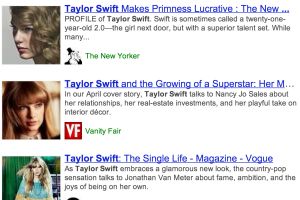 Google makes it clear that there are techniques to ensure that your content is enrolled in the In-Depth beauty pageant. On Google’s Webmaster Central Blog you’ll find detailed instructions on how to “optimize your site for the ‘In-depth articles’ feature.”

The results of the new Google feature are starting to appear online. To understand better how this is rolling out turn to Dr-Pete’s in-depth look at Google In-Depth Articles on The Moz Blog.