In my last post I offered a brief look at publishing training as offered through Masters of Publishing courses, in particular, the Simon Fraser University (SFU) MPub course. The Passive Voice blog linked to the post which in turn coaxed out a few interesting comments. Mira thought “that most people working in publishing had, at most, a B.A. in English and the rest was an ‘apprenticeship’.” Reinhardt agrees with Mira while also pointing to internships as a common entrée into publishing. Author and publisher Will Entrekin posits that “as in Hollywood, many of the people in publishing have ‘failed up’–that is, begun as interns, probably with a BA or about to complete one, usually in literature, and worked their ways up the corporate ladder either in literary agencies or publishing houses.”

Both Mira and Entrekin ponder the issue of publishing accreditation. Mira believes that “people in a position of power… should have educational and licensure requirements, as well as licensure oversight, including ethical standards.” Entrekin notes that “ironically, the organizations that do require certain qualifications of members are the writer/author organizations.”

So what is to be done to aid the publishing companies that are hiring? Should they just accept the applicants from the MPub track and be done with it? Part of me says “No, no: the publishing industry needs digital natives of the highest caliber.” But publishing is not perceived as a high-tech industry. As a result it fails to offer the principle attraction of the loftier of the high-tech firms: a sophisticated technical working milieu and company share options that might actually earn out in a buyout or an IPO (independent public offering [of shares]). Publishing firms are often purchased but not at large multiples of their sales or their net earnings. They rarely command enough financial excitement for an IPO. So a career in publishing in not a beacon for a high-tech-minded young thing, nor for the greedy. It doesn’t pay very well day-to-day and the chances of cashing out big-time are between slim and nil. I’ve got over 600 companies in my “book publishing-related” startup database. Only two have cashed out for over a hundred million: Author Solutions, sold to Pearson (Penguin) for $116 million and Goodreads, sold to Amazon for a reported $150 million. The rest don’t even come close.

Here are a few recent pay surveys in publishing and related industries:

Publishers Weekly Annual Salary Survey (latest I can find is 2010)

I believe that there is a large cadre of bright young folk who are willing to trade the allure of the IPO for the opportunities associated with being perceived as employed in an industry where ideas and culture make a difference. It’s not as if publishing pay = starvation. Many people discover that they can gain greater satisfaction from a challenging job well-done than from the sometimes nebulous prospects of pure technology companies. Publishing is rapidly advancing as a combination digital/intellectual play.

So what about standards for working in the book publishing industry? Is it inherent in the U.S. entrepreneurial spirit that the only measurable requirement for many creative industries is the earning lots of money? The Brits are more grounded when it comes to tackling this challenge. In the early 1980s, (the U.K.) Government determined to improve the effectiveness of British industry by introducing national standards of occupational competence. These standards were to be “explicit, agreed, widely accessible, flexible, progressive and testable.” Then they were rewritten in 2011-12. They latest version is available from the U.K. Creative Skillset for free download, 45 pages. 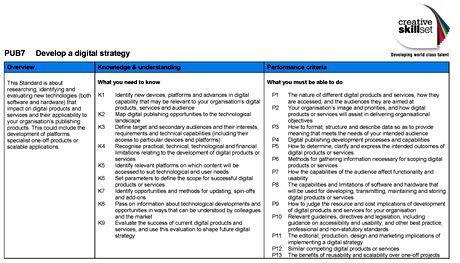 I find the current revised version to be a little bit squishy for my taste. For example the section labelled ‘PUB23’ ask the student to “Define technical and project specifications for digital products.” It suggests that:

• “What you need to know” includes “How the structural design will assist in achieving the company’s objectives for a particular product” and
• “What you must be able to do” includes “Collate sufficient information about the structural design requirements of the product.” I’m not sure how I would test the ‘need to know’ nor to evaluate the ‘must be able to do.’ Too squishy.

Fortunately the 211-page 2005 version can still be found online (PDF). While it’s weak on digital ebook formats, it does mention metadata more than thirty times and ONIX three times (my standard gauge for the utility of publishing training material).

The last question begging to be answered is how many new employees publishing brings on each year. That’s a tough one. Different departments of the U.S. Census Bureau come to significantly different employment numbers.

The 2011 Statistical Abstract of the United States offers these figures for “Paid Employees” in book publishing:

The 2007 Census of Employers & Nonemployers calculated paid book publishing employees at 104,564. I’m not sufficiently versed in U.S. census data to account for the discrepancy.

Turnover rates for Fortune Magazine‘s “Best 100 Companies To Work For” were estimated to run between 12% and 18% in the northeast and mid-Atlantic regions, although much of the movement would involve existing staff. PublishersLunch Job Board has 63 openings at this writing, while CareerBuilder.com shows 322 “Book Publishing Jobs.”

Sales growth in book publishing is a question mark: one month it’s slipping by 2% and the next month growth is calculated at the same percentage. The result is that hiring is not aggressive.

You might have noticed that the 2007 Census numbers I referenced above were for “Employers & Nonemployers.” I was flummoxed the first time I encountered “nonemployers” in an employment survey.

The definition of a nonemployer is a business with no paid employees yet still subject to federal income tax. Census points out that nonemployers are usually self-employed individuals operating unincorporated businesses (sole proprietorships). Most self-publishers fall squarely into this category. So too are many designers, editors, marketers and trainers. Funny to think: the employment growth in book publishing is not from employers. It’s from nonemployers.