On day two of the Music Industry Metadata & Information Summit held in Los Angeles this week (run by NARM and DigitalMusic.org) Rob Weitzner laid it on the line in evoking the ever-elusive appeal of metadata. “Metadata is sexy,” he said. “because if you get paid, that’s sexy.” 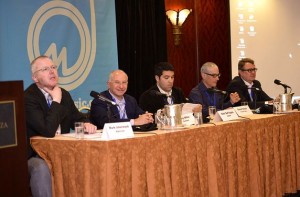 “Building Efficiency & Transparency in Royalty Reporting” was the topic for Weitzner’s five-man panel and it provided essential clues for those who seek to understand how music metadata really functions. Follow the money. Or at least try to find some evidence along the metadata usage trail. Then, with luck and by sometimes wielding a heavy stick, money will trickle into the various royalty collection agencies and things might feel hot.

Of course money is at the heart of industry metadata efforts, but money is not the whole story. On the first day of the conference Ian McEwen of MusicBrainz.org offered a cheerful if rambling account of his non-profit group that “collects music metadata and makes it available to the public.” The group has lofty aspirations: “Like Wikipedia, MusicBrainz is maintained by a global community of users and we want everyone — including you — to participate and contribute.”

Why is it that popular music became nerd heaven, able to inspire hordes of volunteers to spend endless hours documenting music metadata with a goal of becoming the “ultimate source of music information.” There’s an affiliated group called BookBrainz, notable mainly for its lack of activity. In the film world we’re stuck with the merely reasonably good Internet Movie Database (IMDb), owned by Amazon since 1998. Music stands alone in its astounding ability to commandeer volunteer labor.

In fact part of the metadata challenge in every content industry is that there are a couple of 800 lb. gorillas making a pretty good living out of controlling that industry’s metadata, not at all enthused about the raucous joy of open source communities. And while collecting copyright fees might make metadata sexy, the metadata gatekeepers can get their rocks off just by knowing that they’ll be able to command a toll to link to its source.

These tollgate keepers are an august group, dedicated professionals, folks who believe in the value of crystal pure data. Bowker, established in 1868. Nielsen, founded in 1923. The music industry, younger than book publishing, reports mostly to Rovi, founded in 1983 as Macrovision, and to Gracenote, founded in 1998, now part of Sony.

It’s an accident of history and of timing that our creative industry titans saw these companies more as vital partners than as spigots choking the rate of data flow. It’s tough to argue that the Creative Commons would easily improve on the metadata structures of our content industries. But it’s easy to find fault with some of the more arcane practices of the tollgate keepers, the most arcane of which is the economic necessity to ask indies and the self-published to pay tolls to have their metadata made discoverable.

And so the debate continues, much more lively these days because of the hard work by Bill Wilson and his team at NARM/digitalmusic.org.