When did the excitement begin? It was long before the print book. Volume 1 of Hugh Howey’s Wool appeared on July 29, 2011.

Towards the end of 2012 a “real” publisher, Simon & Schuster, the fourth largest of the current big six, insinuated itself into the ebook bestseller ecosystem by awarding a hunk of cash to this tremendously successful self-published author. All of this cash was awarded just for what some see as the detritus of the current publishing process: the print version of a hugely successful ebook.

Hugh Howey describes his backward saga to conventional publishing respectability in detail on IndieReader. All I could think was “good for you, Hugh!”

Yesterday I was in the Houston airport on the way to the PePcon conference where I’ll be talking about BOOKISHNESS.

In an airport bookstore I found Wool, bright red, front and center on the rack. For 15 bucks. OK. That’s not a tall price for a paperback. But what was I going to get for my $15? About 550 printed pages that mirrored the ebook. Plus a two-page Q&A with the author. (Who, we could note, has commanded elsewhere enormous quantities of press for his publishing coup.) 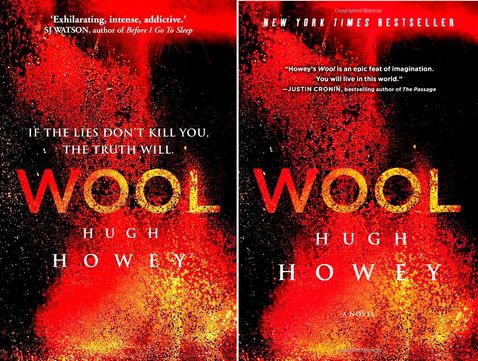 Which one is the print version?

So, Simon & Schuster. So, Mr. Howey. Should we accept that just because it’s print it’s worth between 40% and 250% more than the ebook? Is that how you’re trying to pull us in?

Wasn’t there something you could do with the paper edition of a hugely-popular novel that would remind the reader what print can do that digital can not?

The obvious feature would have been adding text features to the print book. I don’t mean changing the words in the core text. But how about an interview with the author describing exactly why he wanted to have a print version, in cloth and paper, and what that means to him. There’s lots of money on the table here: how about commissioning a set of illustrations that would appear exclusively in the print version for, let’s say, 6-9 months before they’re offered online. Of course there can be reading group extras, a well-established tradition, and extras for the classroom.

Come on! This is BOOKISHNESS! Let’s make an ebook fluid and digital and a print book solid and stalwart. That’s publishing.