I feel like I’m coming in from the Web wilderness as I start viewing John Branch’s, Snow Fall: The Avalanche at Tunnel Creek on the New York Times site. Snow blows across a mountain peak as the saga of an deadly avalanche begins to spill down the page: “Avalanche! Elyse!” 650 words later and the reader has an option to see a 45-second clip with Elyse Saugstad, “a professional skier,” a survivor. 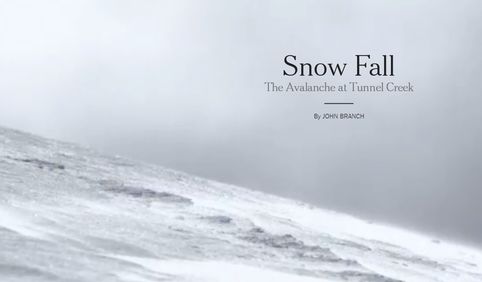 Scroll down a little further and suddenly the camera is taking you on a 3-D flight through the Cascades to Cowboy Mountain and Tunnel Creek. A little further down the page and a 1:15 Flash video explains the “Allure of the Backcountry.”

There are six segments in all, a map, and elsewhere a Q&A with the author. And at the end of the story you’ll find a link to a $2.99 keepsake, an ebook co-published with the very good digital imprint, Byliner.

This is cutting-edge, expensive work, clearly not replicable by your local Weekly Shopper. But it sets a standard that other online publications can aim for: top-flight journalism, well-planned and very well executed graphics, with a generous serving of complementary media. There’s also an 11-minute video viewable on YouTube, cross-promoting, and telling the story from the angle of a lens.

First rate: congratulations to all involved.

Later: For a comparison see Strongman — Hugo Chavez and His Legacy, a half-decent 15-minute Wall Street Journal documentary about an important topic. Suddenly an unadorned video seems too simple: where’s the media-specific value-added?

December 26, 2012: The Economist Lean Back 2.0: “The New York Times pushes the limits of online storytelling” “The result is an online reading experience like no other. I was almost giddy with awe and excitement as I read it.”

January 1, 2013: HOW WE MADE SNOW FALL: A Q&A with the New York Times team. Lots of fascinating background detail on pulling the project together.