The big book publishing news this week is that Barnes & Noble’s boycott of Amazon publishing titles is proving effective and hitting authors and publishers where it hurts the most: hardcover sales of big new titles. 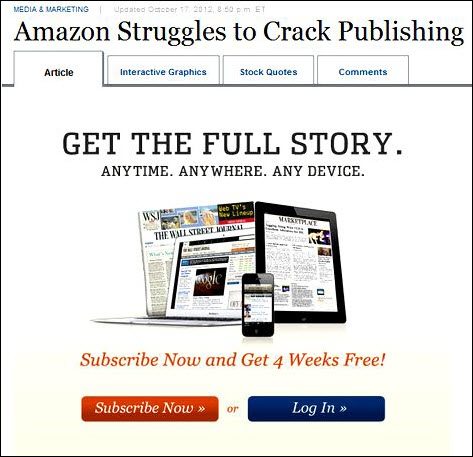 If you don’t subscribe to WSJ you can find the article via a search engine.

Jeffrey Trachtenberg broke the news yesterday in the Wall Street Journal. (N.B.: The article is protected behind the WSJ firewall. If you don’t subscribe you can access it by searching for “Amazon Struggles to Crack Publishing” in Google or Bing and clicking on the link. Sigh.) Trachtenberg’s article focuses on Penny Marshall’s memoir, My Mother Was Nuts, released in mid-September by Amazon Publishing in a $9.99 Kindle edition, and to the trade in a $26 cloth edition by Amazon & Houghton Mifflin Harcourt’s New Harvest imprint.

Bottom line: Independent booksellers, and, more importantly, Barnes & Noble, are boycotting the retail display of titles published by any of Amazon’s printed book imprints, and almost certainly striking a serious blow to the success of those titles.

Depending on how you slice and dice the numbers, Barnes & Noble controls about a quarter of the U.S. retail market (including online). If you look at bookstore sales only, chains (including Books-a-Million) control roughly 4/5ths of a $2.7 billion pie. As Trachtenberg notes, the book isn’t stocked in the 689 stores of Barnes & Noble Inc., Wal-Mart Stores, or Target. I called a couple of Books-a-Million stores and it’s not on their shelves either. 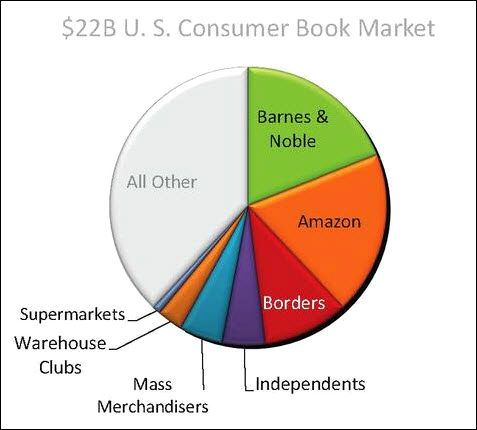 Marketshare in the days of Borders

The book was well received by Amazon customers where 235 customers gave it an average of 3.9 stars. Likewise on Goodreads where 274 ratings lead to 3.57 stars. (Barnes & Noble offers the book online only. The solo review, with four stars, notes only that “From the time I started reading it I couldnt stop and im an adult with very serious adhd.”)

So the book ain’t bad, but it has sold only 7,000 hardcover copies. And that ain’t good.

I got two takeaways from this story:

1. The all-powerful Wizard of Seattle sometimes hides behind a curtain while his 3D hologram spits fire and venom, signifying nothing.

October 23, 2012: Mike Shatzkin devotes his column to this topic, Amazon as a threat to steal big titles from big publishers is still a ways off.

November 20, 2012, New York Times: Tim Ferriss and Amazon Try to Reinvent Publishing. “Mr. Ferriss wants The 4-Hour Chef to be the first nonfiction book to sell a million copies on Kindle. My guess is that he and Amazon are willing to keep lowering the price until they get there.”