Aside from being able to say “I told you so” I’m not quite sure why Barnes & Noble separated its UK reseller partner announcements by two days. The first announcement on August 28 rated low for impact: John Lewis has only 37 stores and already shills for Barnes & Noble’s competitors Amazon and Kobo.

Today’s announcement of three new partners includes a retail chain with a whole bunch of locations. Sometimes compared to Sears in the U.S., Argos will be stocking the Nook in over 700 stores, and Barnes & Noble was at pains to point out that with “90 percent of the population living within 10 miles of an Argos store, this literally brings the NOOK experience close to home for millions of UK consumers.” 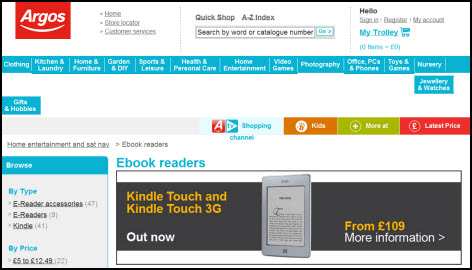 What Barnes & Noble didn’t highlight is that like John Lewis, Argos is also a reseller for Amazon and for Kobo. Argos is in fact more ecumenical: it also sells the Sony E-Reader and the low-cost Archos and Binatone devices. 90 percent of the population in the U.K. are probably not delaying their e-reader purchases for the arrival of the Nook. While it’s all to the good that the Nook will soon be available in the U.K. I don’t this will change the ending of this long-running bookstore drama.

The other partners are the famous independent bookseller Foyles (2011 sales of £23 million and a modest profit), and the 45-store academic chain, Blackwell, which loses money on annual sales of just over £75 million.