I watched the Microsoft Surface tablet announcement this evening and I knew pretty quickly that I was looking at a winner (see mea culpa below). I’m not sure why I know that, as I’ve not held a Surface Tablet and they’re not yet available for sale. The demo event in Los Angeles was extremely well scripted; the messaging tightly crafted. There was an unusual emphasis put on the smaller engineering details of the tablet. It shows beautifully: Microsoft is clearly pulling out all the stops when it comes to designing and building a first class piece of hardware.

The advance word, scuttlebutt really, on the Window 8 software has been equally good. While Surface pricing remains unknown, I can’t believe that Microsoft will blow it on this important detail. The market has already sent out some clear messages about pricing/hardware trade-offs to Apple, Amazon, RIM, Samsung and others. Microsoft can be dumb, but it’s not deaf. 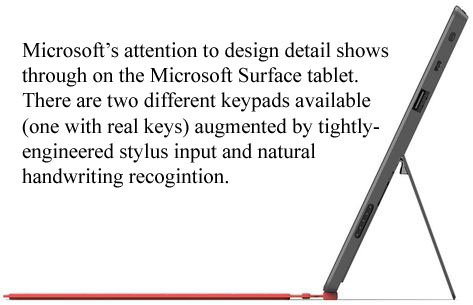 Where do we go from here with the Microsoft tablet? It’s not clear when it will be shipping: my sense is not till September. Two to three months from now might as well be two to three years. By fall we’ll know when Amazon will start offering its smartphone and we’ll have a better sense of what Google has in store for hardware. Expect new tablets from Samsung, Dell, HP and a rebuttal from Apple before October.

All of which fits in snuggly with today’s other story: the market for tablets is sprouting in all directions. Simultaneously.

The source for today’s market figures is the Online Publishers Association and Frank Magid Associates. There’s no particular reason for me to trust this data over any other. It’s the usual type of survey audience spec, in this case an “online survey of 2,540 internet users between the ages of 8 and 64” and a margin of error of ±1.94%. Whatever. The data just smells right to me. Starting here: 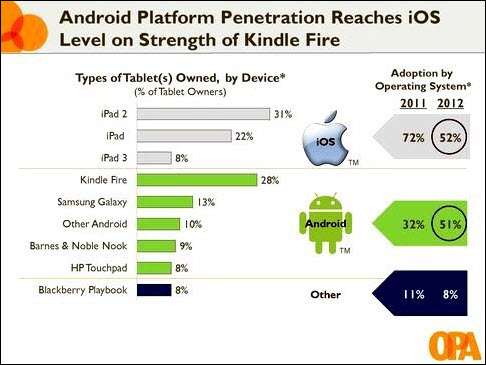 A couple of recent studies suggest that the Kindle Fire was a one-trick pony, now dead in the water. I side with the analysts who deduce that sales for the Fire and several other Android tablets are clipping along at a reasonable pace. By all accounts Barnes & Noble fared well with its March Nook Hunger Games promotion.

The survey also offers a detailed picture for content consumption on these shiny tablets. 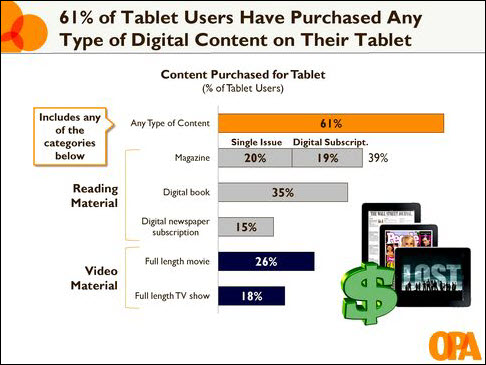 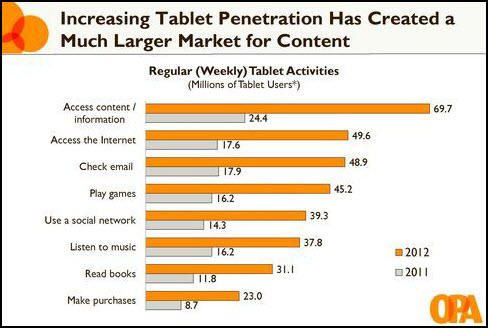 The slide above makes clear the cumulative impact of tablets: the market population is exploding, and so are the opportunities for content producers, whether audio, video, text or app. Game playing is particularly popular, as I’ve seen recently when looking over the shoulders of my fellow passengers on public transit (including packed airplanes). 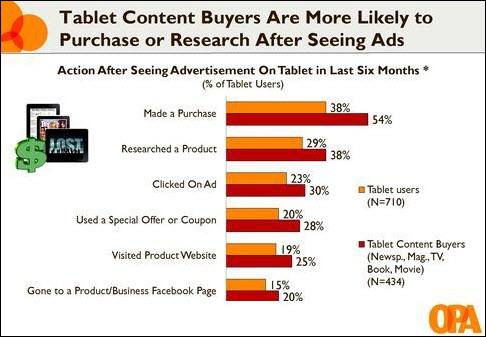 And, much to the relief of publishers and advertisers, tablet users are proving to be a particularly captive audience for tablet-style display ads. They’re seeing the ads and they’re acting on them to a large, but not really surprising extent. This activity is certain to decrease as users settle into fixed usage patterns and the novelty wears off. But I think that tablets will remain the top advertising platform for the next 3-5 years while the tablet form factor holds sway. Users have learned how to tune out the advertising on their desktop computers while advertisers have yet to figure out how to deliver compelling messages on 3.5 inch mobile screens.

The last slide comes from another study, the January IDG iPad for Business Survey 2012. 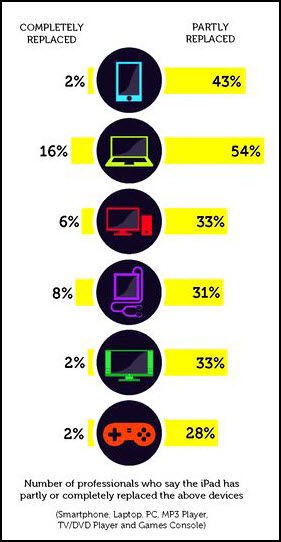 The survey zooms in on a key question driving tablet adoption moving forward: Can the tablet completely replace other digital devices? As you see above, the answer is “nope.” They’re not necessarily expected to replace smartphones or game consoles. But they need to replace laptops to move toward full adoption as a primary computing device.

Except for a small minority of users the iPad doesn’t quite cut it as a notebook computer replacement. The Microsoft Surface, fully configured, looks like it will. That’s what made today’s announcement from Microsoft so important. Microsoft advanced the tablet hardware/software functionality spec the required extra couple of yards to pave the way for tablets to substantially replace notebook computers in business. That’s big news.

June 19: An article from last week by Larry Seltzer on BYTE: “Why Today’s Notebook Soon Will Be Obsolete.”

June 19: New York Times: “…the [$500 range] ARM tablet would be available when the next version of Windows was released this fall, and the professional version [$1000 range] would go on sale a few months later.”

December 1, 2012: Well, I called another one wrong. The Surface tablet thusfar is a loser. The OS is good but not delightful and their aren’t enough useful apps. Apple’s iPad Mini is winning the battle, with strong showings from most of the tablet vendors whose name is not Microsoft.

July 14, 2013: Yep, I totally flubbed it. All the tallies come to the same conclusion: failed product. Tonight on Monday Note (Jean-Louis Gassée): “To reverse this downward spiral Microsoft needs to come out with a real tablet, not the insincere and unsuccessful ARM-based Surface RT device. This means a tablet that’s powered by Windows Phone with Office applications that are specifically, integrally designed for that OS.”