I couldn’t make this stuff up if I tried: 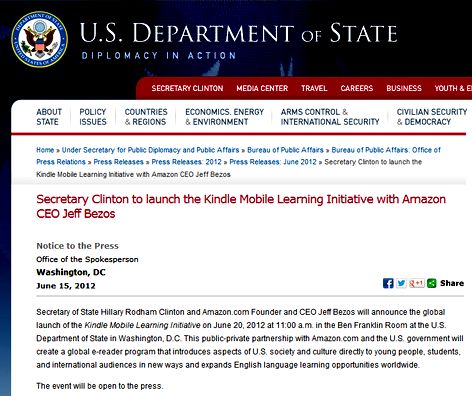 Secretary of State Hillary Rodham Clinton and Amazon.com Founder and CEO Jeff Bezos will announce the global launch of the Kindle Mobile Learning Initiative on June 20, 2012 at 11:00 a.m. in the Ben Franklin Room at the U.S. Department of State in Washington, D.C. This public-private partnership with Amazon.com and the U.S. government will create a global e-reader program that introduces aspects of U.S. society and culture directly to young people, students, and international audiences in new ways and expands English language learning opportunities worldwide.

The correct context for the above announcement is the following:

Yesterday the American Booksellers Association (ABA) submitted its official response to the Department of Justice (DOJ). No surprise: Amazon comes in for extensive criticism:

Um, aside from that, what does the ABA think about Amazon?

Could this announcement from the State Department be any more inappropriately timed? No, I don’t think so.

Thanks to Laura Hazard Owen for the tip.