This past few weeks have been a great eye-opener about Facebook, social media, and about the web as an ad-supported medium. It’s been just about as significant for IPOs and the VCs and investment bankers who conjure them.

It’s all happened so quickly that it’s tough to get a handle on what’s just taken place – we know that $100 billion changed hands – but we’ve lost track of the score. Did they win? Did we lose, again?

The media often seems mystified by the rapid changes online, its commentary banal and unfocused. But the Facebook fiasco has drawn out some thoughtful and frank analysis, enough to bring clarity to online history in the making.

The first media moment emerged the week before Facebook’s IPO and required only head-on reporting by three Wall Street Journal reporters: “GM Says Facebook Ads Don’t Pay Off,” the headline ran. And so did the story, not much more than that. Recalling the old chestnut: “I know that half of my advertising dollars are wasted. I just don’t know which half,” the report found a contrast to General Motor’s move from small-car maker Kia. “Earlier this month, a top marketing executive from the U.S. division of Kia Motors questioned the value of Facebook ads, saying it was unclear how paid ads help sell cars,” the reporters noted. “However, the South Korean auto maker said it still planned on increasing its ad spending on Facebook this year.”

The next media chapter was the IPO itself. The online jury declared victory for Facebook when it successfully floated a $100 billion valuation, which had always been the most optimistic price point. 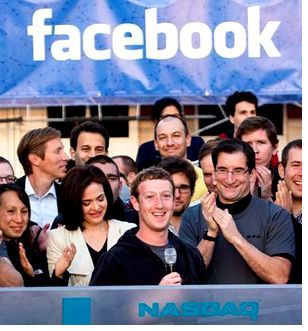 Writing in Business Insider Henry Blodget provided a thorough analysis of Facebook’s true value as a publicly-traded stock. He concluded that “a fair price for Facebook might be between $16-$24” assuming that its earnings growth continued in line with projections – a pretty big ‘if” when there are naysayers as loud as General Motors.

It’s not that I think the company is worthless – by no means. But certainly its value is far below $100 billion. It distorts business models and business values: if you’re not “like Facebook” or working in a way that endorses Facebook’s approach then investors look askance. That’s unhelpful for publishing vendors competing for the same ad budgets that Facebook commandeers.

On April 25th I highlighted an article in the London Financial Times that claimed “Facebook is scared of the Internet.” Journalist John Gapper characterized Facebook’s $1 billion Instagram purchase not as an investment but simply as a defensive move: to “eliminate the threat to Facebook.” Very sad. And indeed one month later, Facebook announced that it was releasing its own variant on Instagram, Facebook Camera.

The result of these moves is that Facebook has roused the regulators. News reports today reveal that “Facebook has received a ‘second request’ from the Federal Trade Commission [FTC], essentially a request for relatively large amounts of data that the regulators will sift through to ensure that the deal complies with antitrust law.” As a former FTC staffer says “when the dominant firm is paying clearly an excessive price to take out a rival, it gets the closest scrutiny of all.”

On May 22nd Michael Wolff published the most aggressive attack yet on the whole Facebook fiasco. Wolff is a solid source, he’s has been around the block with overhyped IPOs and the media business. His 1998 Burn Rate is still a must-read for starry-eyed tech entrepreneurs. In his May 18th column in The Guardian he proffered fighting words: “There’s no doubt the Facebook IPO is symptomatic of a new tech bubble. The only question is when will it burst.” By May 22nd his forecast for carnage grew fearsome. “Facebook is not only on course to go bust,” he wrote. But when it does, it “will take the rest of the ad-supported Web with it.”

I’m with Wolff on his central point: Facebook is nothing but a good old ad-supported web site. The company “derives 82 percent of its revenue from advertising.” Wolff sees that business collapsing: “I don’t know anyone in the ad-Web business who isn’t engaged in a relentless, demoralizing, no-exit operation to realign costs with falling per-user revenues, or who isn’t manically inflating traffic to compensate for ever-lower per-user value,” Wolff proclaims. Ouch. And Wolff knows the ad business first-hand: double ouch.

Conservative New York Times columnist Ross Douthat, whose strong politics sometimes obscure his vision, comes into his own when it’s time to dissect Facebook. Last weekend he went one-on-one yet achieved balance. Douthat sees Facebook’s failure not as one of imagination or innovation but of dollars and cents and of job creation. And not a complete failure there either. “The problem is not that Facebook doesn’t make money,” Douthat writes. “It’s that it doesn’t make that much money, and doesn’t have an obvious way to make that much more of it, because (like so many online concerns) it hasn’t figured out how to effectively monetize its millions upon millions of users.” And it doesn’t need many employees to fail to monetize its users. Hence Facebook has “created a cultural revolution more than an economic one.”

The last word(s) go to the ever-wise Doc Searls, whose writing I’ve followed for twenty years. After Facebook Fails is Doc’s elegant 2500-word essay offering a gentle yet persuasive appeal to investors. “If you truly believe in free markets, then start believing in free customers,” Doc writes. “The buyer is a person. That person does not require either a social network or absolutely-informed guesswork to know who he or she is or what they want to buy.”