I’m trying to find a comparison for the Instagram purchase. Adobe’s initial 1989 deal for Photoshop provided a guarantee of $250,000 for two years as distributor for the software. Photoshop 1.0 retailed for $1000. Instagram is free. But it’s worth a billion because, well, just because. Because Facebook will shortly have to pretend to be worth $100 billion. And Instagram’s shiny veneer will encourage fools to buy into the fiction. 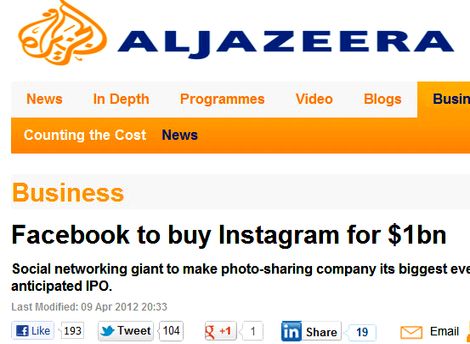 The total cash investment in Instagram from VCs was $57.5 million. $50 million arrived just a month ago, valuing the company at $500 million “despite some skepticism” that the company would ever make money. The skeptics may still be proven right. But the investors I would call “righter”.

Microsoft’s deal for AOL’s patents demonstrates once again that patent law designed originally to promote creativity and invention has become the monster destroying creativity and invention. It is a travesty and a tragedy. As an analyst who has earned generous fees over the years as an expert witness in patent litigation I should be thrilled. But I’m sickened. Along with Google’s $12 billion Motorola purchase, Facebook’s IBM patent buy, Google’s IBM patent procurement, and Apple’s endless courtroom combat, America’s patent process is not merely broken, it is now a Godzilla, destroying everything in its path.

Three articles appeared Monday have finally pushed my tolerance for Facebook past the breaking point.

Last night Frédéric Filloux asked “Would you buy Facebook shares?” He continued: “Facebook numbers are both fascinating and frightening. The social network will pass the 1 billion members mark this year.” 1 billion members, one-seventh of the world’s population. Jeez, I thought. That’s the same number of people that practice the Catholic religion. One billion is also the number of people who will go to bed hungry tonight, as they do every night. I wonder what $1 each would buy those people. I wonder what it bought Facebook.

Three days ago the Columbia Journalism Review described Facebook-enabled “creepy and cringeworthy” newsfeeds, unexpectedly revealing to one and all every article you’ve so much as glanced at, including “What Was the Liquid Dripping Down Christina Aguilera’s Leg at the Etta James Tribute?”

And Cory Doctorow’s Boing Boing reported yesterday a Facebook privacy-leak “that’s creepy even by Facebook standards. When you sign up for apps, the app-maker has the power to extract all your friends’ personal info.”

I snapped. What benefit could I possibly be receiving from Facebook to justify these wretched invasions of privacy?

I shut my account tonight. It ain’t easy, of course. I tried to export everything that I’d ever posted on Facebook. There’s an easy way to do this directly from your account settings. The only problem is it doesn’t work. And there’s no one to help you because it’s free and free doesn’t include help.

So I tried to shut my account without my little scrapbook of memories. I was told that friends would miss me. I’m going to send them cheerful greeting cards through the mail. I expect their sorrow will soon pass. 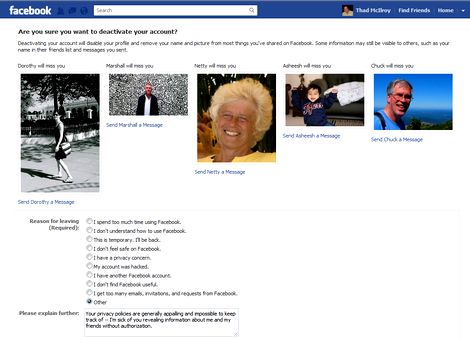