Thinking of the Amazon.com Kindle Fire as an iPad killer doesn’t illuminate the issue of how tablets and e-readers are impacting the future of publishing. Fire is aimed first at Barnes & Noble and its Nooks, and to a much lesser extent, at every other hardware company that thinks it might succeed in the tablet space. (Apple has already closed off the high end. Amazon has now effectively closed out the low-end to mid-range market.)

No company can successfully compete with Apple on hardware, and Amazon isn’t even trying.

I’m picking up from a GigaOM post today by Kevin Tofel called Mobile Media Stores: Apple vs. Amazon vs. Samsung which in turn draws on a John Gruber post, Amazon’s New Kindles.

Gruber argues, correctly I think, that “Amazon built an alternative to the iPad (emphasis mine), rather than a direct competitor.” But the real story, he points out, is in the content. Apple uses content to drive hardware sales. Amazon subsidizes hardware prices to distribute millions of content purchasing devices (that sell because they also do an excellent job displaying books). Gruber says that “The Kindles are to Amazon what the printed catalog was to Sears a century ago.”

It appears likely that Amazon will lose money on the sale of each Kindle Fire. iSuppli calculates the loss at nearly $10/unit on the $199 device. But Amazon’s business plan is the old razor and the blades.

Tofel then examines the content competition issue. His main point is that Gruber underestimates the amount of content available to Samsung Galaxy Tab owners now that Samsung offers Media Hub. Although its focus is solely on movies and TV, with 3rd-party offerings Galaxy Tab owners have access to a good selection of music. And with native Android versions of the Amazon Kindle and Barnes & Noble Nook software the ebook playing field is leveled. Or is it?

I thought I would look at the three big ebook stores side by side. I could compare them on pricing, but in keeping with Tofel’s theme I focused instead on title availability. All three stores have a near-identical selection of the hot bestselling titles from the major publishers. The difference shows in the availability of self-published ebooks. Here Apple is falling far behind its two large bookselling competitors.

The reason for this is simple and the blame lies squarely with Apple Computer. Apple’s roots in digital content are both in the large music and film distribution companies, and also in apps. Apps can take a long time to get approved on iTunes, and Apple didn’t see the apps business model working with self-published authors. So it appointed “iBookstore Aggregators,” five for North America. They’re all good companies, but they can appear as another speed-bump for novice self-publishers trying to get their books on iTunes.* 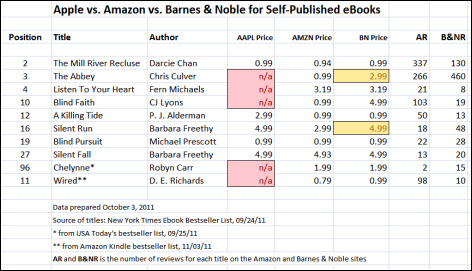 As you can see, Apple is missing half of the 10 titles on this week’s ebook bestseller lists (narrowed down to just self-published titles). That has to be troubling to Apple and its publishing partners. Apple and the big trade publishing houses could argue that the sorts of people who buy 99 cent ebooks aren’t iPad/iPhone owners. That would not be a clever argument. I would argue that after launching the iBookstore with great fanfare Apple is acting very much like a company that doesn’t much care about ebooks.

Barnes & Noble faces a different problem. None of the books here sells for over five bucks and yet Amazon manages to discount many of the titles below Barnes & Noble’s list prices, on average over a third off (of course Amazon’s prices are lower still in comparison to Apple’s).

Barnes & Noble, unless it makes some startling moves very soon, will not survive Amazon’s onslaught.

Apple will. But it would be well-advised to stop treating ebooks as an afterthought. Either make the iBookstore into a great ebookstore, or just accept that Amazon and a few others will supply the books on your tablets. Right now Apple is just muddying the ebook waters.

* To be clear, the iBookstore Aggregators are there to help self-published authors get their work into all the ebookstores. But Amazon and Barnes & Noble make it dead easy to deal with them directly, and so many authors are happy to use just those two outlets. Apple is creating a vicious circle with its highfalutin ways.