The difficulties facing online TV website Hulu are a mirror to the challenges facing all publishers as we move toward the future.

Brian Stelter held up that mirror in an excellent article in last weekend’s New York Times. It’s the best piece I’ve read this year examining the future of publishing.

Anyone familiar with this site understands that I see television as a publishing medium, as I do music, movies and magazines.It’s much easier to figure out where your publishing medium is headed if you take a little time absorbing the lessons from others. The story of cassette music tapes informed the experience of TV videotapes which morphed into widespread audio and video copying online which informs the challenges facing ebook publishers today. Napster led to iTunes which later spawned Spotify. Netflix is watching closely.

The great experiment called Hulu, partly about television, partly about Hollywood, offers a lesson for all publishing industries.

If you’ve been following the story, or if you catch up on it through Stelter’s pithy New York Times account, you’ll know that Hulu lacks a happy ending. True, we’ve not seen the last episode. But it doesn’t look good. The networks are wavering in their support and compromising the product. Customers are heading for the doors.

Why would the networks waver when three of the largest co-own Hulu? Because, as Stelter points out, they need “steady profits.” That’s the same challenge confronting big newspaper publishers, book publishers and the music industry.

Large corporations have many strengths. Flexibility is not one of them. They can deal with steadily declining profits more easily than they can deal with uneven profits, uncertain ones. Their systems are not well-tuned to the unexpected. 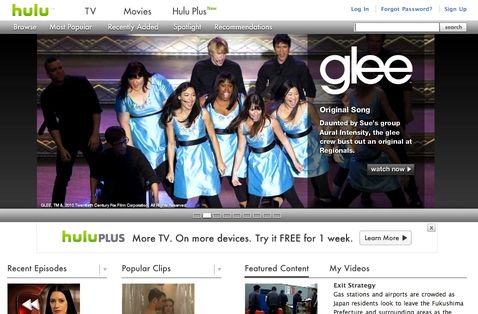 Television companies and their production partners are further encumbered by the great tangle of copyright that chokes so much activity on the web today. Stelter calls television contracts “convoluted and often outdated…designed to protect the core business.” That could just as easily describe the contracts in the music industry or the book industry. He offers a lovely insight: “Sometimes content owners and distributors even haggle over what to haggle about.” Yes, I can well imagine they do. I’ve seen it.

The result is predictable. The popular ABC sitcom “The Middle” isn’t available through Hulu (although, annoyingly, a preview is). “What pops up when a fan of the show searches for it on Google?” Stelter asks. “Web sites that link to illicit copies of the show.”

Is this the new middle ground?

And so the industry gets bogged down in endless wrangles about rights and permissions and leaves us with empty slogans to entertain. Time Warner calls it “TV Everywhere“, which Peter Kafka at the Wall Street Journal explains “means ‘except For Time Warner Cable’.”

The other struggle that alone would doom Hulu is finding the right revenue mix. Is it advertising? Is it subscription fees? Is it pay-per-view fees? (Music meanwhile is morphing from pay-per-song [iTunes] to subscriptions [Pandora, etc.] to advertising [Spotify]. Books are hampered by history and haven’t yet broken out of the pay-per-book model.) While Hulu CEO Jason Kilar talks up the site’s profitability, Stelter puts it in perspective: it barely moves the needle for any of the network owners. Hulu is trapped. If it further increases the amount of advertising that appears, the user experience plummets. Yet with so many gaps in the shows it streams, users aren’t going to pay healthy prices to subscribe.

As Rome burns creativity and content marches on. The networks still produce brilliant content on top of their superb libraries of series past. Can they loosen up fast enough before the train leaves the station? Did the music industry? Will book publishing?

Stayed turned for next week’s episode of The Future of Publishing.