With little fanfare the Columbia Journalism Review yesterday released the most intelligent and insightful report I’ve yet read on the business of digital journalism. The Story So Far: What We Know About the Business of Digital Journalism is the understated title of the must-read new report on the news business. Implicit in the report is a call to action: as Thich Nhat Hanh has observed, “Once there is seeing, there must be acting. Otherwise, what is the use of seeing?”

I’ve only read three chapters and if that’s all there was I’d still be crowing: start reading, NOW. (The full 143-page report is available for free download. What a gift.) 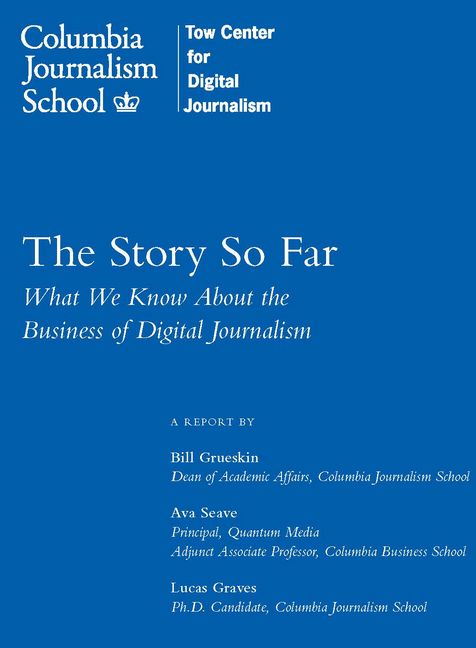 The principal author is Bill Grueskin, dean of academic affairs and professor of professional practice at Columbia University’s Graduate School of Journalism. His co-authors are consultant and adjunct association professor Ava Seave and PhD candidate Lucas Graves. I don’t know how they split the work but the research is thorough, the writing lucid and the conclusions spot-on.

Some of it will of course be familiar. Too much given away for too little. The economics have changed, and not for the better. News organizations were fat in good times partly because the impact of advertising was nearly impossible to measure.

But in the midst of the expected some sacred cows are slain. Among them:

1. While publishers have “more information about their readers, in real time,” “many of (the) numbers are unreliable, misconstrued, and prone to exaggeration. Usage estimates often vary by 200 percent or more.”

The most vocal proponents of the online model refuse to acknowledge this disconnect. Their gospel preaches that everything online is measurable. It’s just that most of the measurements are wrong. On the other hand, they understand the game. The authors approvingly quote a sister report which noted that a “long-appreciated irony of media measurement (is) that accuracy matters less than consensus. Doubts don’t matter much as long as no competitor is seen to benefit.”

2. The business model for traditional media was high fixed costs and low variable costs. “It costs a lot—and often requires companies to take on a great deal of debt—to produce the first copy of a newspaper or magazine. But the second copy, and the thousands or millions that follow, are relatively cheap.” Digital publishing get the best of both worlds: The initial cost is often modest while the variable costs drop to near zero.

3. Banner advertising has failed. You won’t hear that spoken at Facebook, AOL or the New York Times. “A small, rectangular banner ad conveys little useful information,” the authors quietly note. Yep. It sucks. But just because banners don’t work doesn’t mean that advertising doesn’t work. Many “readers and viewers see advertising as useful and entertaining. Indeed, access to advertising is another incentive for people to buy magazines and newspapers or listen to and watch broadcasts.”

Digital media lets publishers “target advertisers’ messages” and offers “better metrics to determine impact.” So where are the ads that take advantage of that equation?

The authors note that they have a bias: “We think the world needs journalism and journalists…much of what Americans need to know will go unreported and unexposed without skilled, independent journalists doing their work.” Regardless of whether you share that bias The Story So Far will help you understand the mechanisms by which digital journalism can succeed.

This report reflects also on the changing dynamics of book publishing.

After the death of Osama bin Laden a bunch of books are being tossed onto printing presses and a publishing revolution proclaimed. But big breaking news stories have spawned instant books for decades.

But well researched and thoughtful reports have never spawned instant books because the economics of production prohibited the practice.

The authors of The Story So Far apologize in their introduction, noting that “digital journalism is such a dynamic field that some of the findings and conclusions we reach in May 2011 will be outdated within months.” Conclusions reached in May 2011? And I’m reading them in print (off my laser printer) on May 10, 2011? Now that is the future of publishing!