I’m in New York at the sold out IDPF 2011 Digital Book conference run by the International Digital Publishing Forum. What a day it has been!

The big news of course is the “release” ((It’s actually the “Proposed Specification for final member and public review” — it’s been approved by the 100-member working committee, but now requires formal approval by all IDPF members. This is expected by end of summer.))of EPUB 3, the new version of the “ebook standard.” ((It’s actually the e-publication standard as it could also be used for “magazines, newspapers and corporate documents.” As it is in fact used 99.9% of the time only for books I expect most will continue to call it the ebook standard.))

We knew it was coming, as the first draft has been available for comment since February 2011 (and the scuttlebutt preceded that). But an unreleased spec is as uncertain as a rumored day of reckoning and most publishers were still cutting their teeth (or injuring their pride) on EPUB 2.0.1.

Perhaps it was the Obfuscation Algorithm for Font Mangling that annoyed them? But there were so many annoying things about EPUB 2. What I found infuriating were the paltry results one obtained from so much effort. It felt as if a cruel genius had dragged the publishing industry back to the days before Gutenberg. OK, so the type in EPUB 2 was movable. In fact it was altogether too movable. It wouldn’t sit still.

EPUB 3 in many way leaps far beyond anything Gutenberg could have dreamt even on a dark and stormy night. It’s a love song to the pagination lessons learned over the last 500+ years married to the new media insights of the last 50. You can do anything. ((OK, not anything. But so very much (a) more than you could do with EPUB 2 and (b) more than most authors and publishers can currently even get their heads around doing.))

The feature list of EPUB 3 reveals that it’s a specification with both breadth and depth. It supports DAISY talking books for the “print disabled”. It supports MathML (you know that a typesetting/display system is adult-ready when it supports MathML). It supports all sorts of audio, video and interactivity. It supports JavaScript. It offers improved support for SVG (which is a much bigger deal than many would at first recognize). 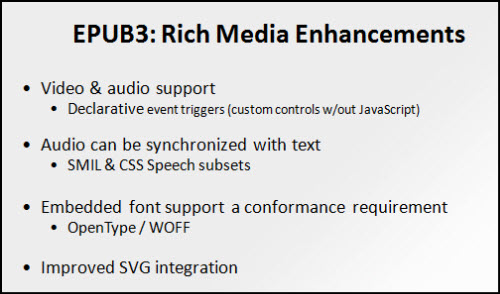 Asian languages have joined the EPUB family. And the all-inclusive metadata support will have to be the subject of a separate blog entry (after I still my beating heart).

There will be much written about EPUB 3 in the months ahead. For the non-technically-inclined this will be very dull. So ignore it all, and just take it from me now: all of your concerns about the quality of page presentation for digital publications, such as books, have been addressed. ((Or so close to all of them that you will be labeled anally-retentive if you go on & on about what’s missing.))

That the IDPF committee created this new specification in a year is nothing short of miraculous. I believe that this could be the source of Harold Camping’s confusion last Saturday. 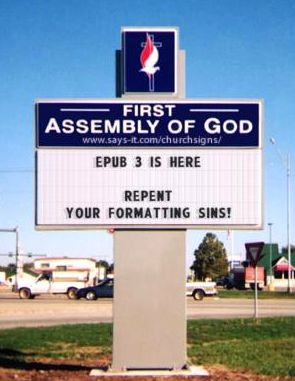