An informative article in today’s Globe & Mail highlights the plight of Canada’s largest book chain, Chapters/Indigo (formally, Indigo Books & Music Inc.). Unlike in the United States, Chapters/Indigo is already the “last man standing” among bookselling conglomerates. It’s like Barnes & Noble would appear after it ate Borders.

As with many flagship corporations Chapters/Indigo is personified by its CEO and largest shareholder, the very visible Heather Reisman. Reisman has conquered tough competition and tough markets to emerge the sole winner of Canada’s chain bookstore wars. (Anti-competitive you say? How 1970s of you.)

With an ominous headline, Indigo’s Heather Reisman Faces Digital Reckoning, Marina Strauss says that these days Reisman’s favorite book doesn’t have a Penguin on the cover. No it’s Onward, Starbuck founder’s Howard Schultz’s story of turning those coffee shops around by the clearly innovative methods of closing unprofitable locations, firing a slew of people, and adding some new products. (Having read his book, Schultz is now reportedly “eager to work with Ms. Reisman,” although she already has Starbuck’s kiosks in most of her stores. That’s the problem with too much retail consolidation: it’s hard to find new friends to play with.)

I’m with Ms. Reisman in the prediction predicament. In 2009, she guessed that digital book sales would “erode 15 percent of her traditional book business within five years. Now she’s predicting it will be 40 percent.” Only Mike Shatzkin seems to have accurately guesstimated the forward thrust of ebooks.

Reisman hedged her digital bet by taking about a 60% stake in the ebook platform Kobo (which is Borders ebook bet as well). Unfortunately Kobo lost $10-million in its latest quarter and is running far behind Amazon (and perhaps Apple) in the ebook delivery business. 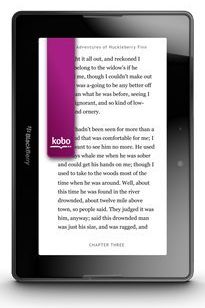 The Kobo in BlackBerry Flavor Too

So what to do? Indigo is increasing its selection of more-profitable-than-pixels “tableware, toys and tote bags.” Reisman drew scorn several years ago “by ditching sofas to stop people from loitering, replacing them with hard chairs.” She’s decided to reverse the move by “bringing back the soft chairs to help re-establish the retailer as a place to hang out.” And, it is hoped, “make purchases.”

Coming Soon to a Bookshop Near You

I have seen the future of bookselling and it is Shea butter handcream.

July 8, 2011: “Indigo has made clear it intends to transition to a new product mix that includes more giftware, toys, and lifestyle products, with less shelf space reserved for books. At a vendor-relations meeting last week, the chain also informed suppliers that it is evaluating returns on a shorter timeframe, meaning some books are likely to spend less time in stores.”

July 23, 2011: Earlier this evening I went into a large Chapters/Indigo in downtown Vancouver in search of any book by Pulitzer Prize winning author Studs Terkel (any of the several dozen he has authored). His book 1974 classic Working is #17,728 at Amazon. It cannot be purchased from any of this company’s stores in Canada; none of his books can. A clerk assured me that one day Terkel would again be popular. “Look at Catch 22,” he noted. Precisely.