I was reading the bio of the David Lavin, the president & CEO of The Lavin Agency, a speakers bureau that represents some famous names, including the 400-Hour Workweek’s Timothy Ferriss, CNN’s Anderson Cooper and “Literary Legend” Margaret Atwood.

In his bio Lavin catalogs some impressive achievements. He was the youngest chess master in Canada and represented the country in two World Under-27 chess Olympics. He had a very successful career as a promoter, bringing such luminaries to Toronto as Peter Ustinov, Tom Wolfe, Jerzy Kosinski, Noam Chomsky, Hunter S. Thompson and the legendary triple bill of Abbie Hoffman, Timothy Leary, and Eldridge Cleaver.

What? Wait. Does that strike you as an odd claim? People have long boasted about their libraries. But I tried to translate it into the ebook era and it doesn’t parse.

Lavin actually writes that his 3rd-person self “has an ever-growing personal library of over 3,500 books.” Try adding “on his Kindle” or “on his iPad” to the phrase and say it slowly. It doesn’t sound right to me. 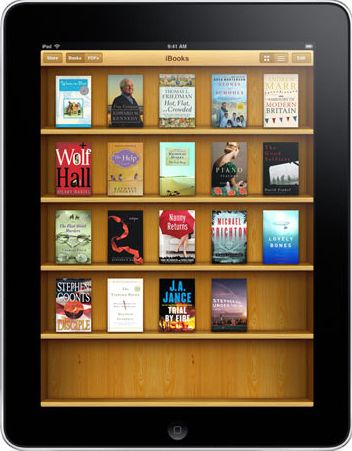 Or as I’ve seen trumpeted elsewhere, Lavin could update the claim to having 3,500 books on “three Kindles (including the DX), two iPads (both versions), his iPhone and his Android smartphone” — emphasize the hardware, not the software. But that would sound boastful.

If Kevin Kelly is correct about the future of books — they will be “accessed” not owned — then how will we categorize our love affair with the printed word…oops…the…word?

Another view of the library of the future from Jeff Koterba at the Omaha World Herald. 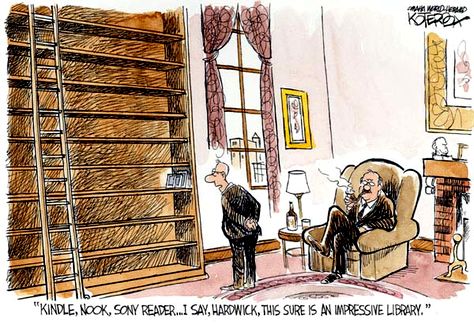