…I’ll believe that the printed book is dead. When they stop printing a thousand dollar 20-volume dictionary, wisdom prevails. 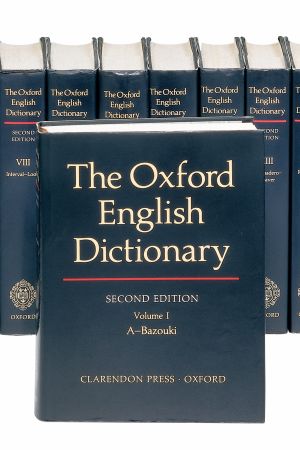 If you’re a cheapskate, you can buy the miniature version for five cents less than $400, and they’ll toss in the magnifying glass!

Making the rounds of the blogosphere, Twittersphere and ignoramosphere today is the inaccurate but inflammatory headline originally from the U.K.’s Telegraph: “Oxford English Dictionary ‘will not be printed again’.”

Later in the article “A spokesman for the OUP said a print version of OED3 could not be ruled out ‘if there is sufficient demand at the time’ but that its completion was ‘likely to be more than a decade’ away.

More than a decade away. If anyone at Oxford University Press can make accurate predictions of what will be happening 10 years+ from now, they should be in the prognostication business, and forget lexicography.

I’ve got to run to the eye doctor now, and will finish this posting later…