How novel to imagine that youngsters aren’t novel.

The title of this entry is an English translation of the name of a German article appearing on August 6 in Spiegel Online. I don’t read Der Spiegel, the largest German newsweekly, in German or in English. Fortunately my friend Bob McArthur does, and brought this to my attention.

The article could be read quickly as merely another superficial piece on young people and the Internet. But this one is decidedly different. Rather than treating youth as a mysterious cult, the digital natives that we explorers can’t quite grok, the article focuses on establishing a simple singular point. “New research shows that the majority of children and teenagers are not the Web-savvy digital natives of legend,” states the lede. Instead they are “more interested in their real-world friends than Facebook.”

Could this be possible? You mean they don’t have secret decoder rings? The article is based mainly on some new research out of the Hans Bredow Institute entitled Growing Up With the Social Web. The presentation is available online, but only in German. Spiegel offers a single chart in English. 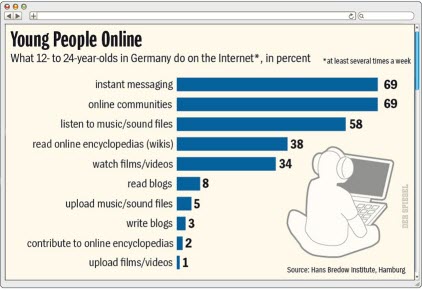 I do recommend reading the original, but the key point appears best in these two paragraphs:

A small group of writers, consultants and therapists thrives on repeating the same old mantra, namely that our youth is shaped through and through by the online medium in which it grew up. They claim that our schools must, therefore, offer young people completely new avenues — surely traditional education cannot reach this generation any longer, they argue.

There is little evidence to back such theories up, however. Rather than conducting surveys, these would-be visionaries base their arguments on impressive individual cases of young Internet virtuosos. As other, more serious researchers have since discovered, such exceptions say very little about the generation as a whole, and they are now avidly trying to correct the mistakes of the past.

My restatement of the piece would be “Digital non-natives make the same error made by explorers throughout history: both ennobling the savage and at the same time demonizing him.” Turns out the native is human, just like you and me. And s/he doesn’t think that foraging, hunting and “native” dances are remarkable.

Of course consultants like Don Tapscott and Marc Prensky feed us the charismatic guru’s diet of what we want to believe: that digital natives(quite a good term: the secret to success for gurus is coining terms like this and making them sticky) are a superspecies, i.e. able to find technology to be somehow commonplace in a world full of frightening marvels.

They (and we) did not consider that for the natives the marvels are completely taken for granted, thereby losing all mystical powers. What remains are the day-to-day social concerns of all teens, made somewhat simpler to navigate with texting, Facebook, etc. And as always, there is the challenge of learning to use educational tools — whether textbooks or computers & wikis — as effectively as possible. Just because kids grew up with technology doesn’t mean they know how to use it well. And their elders were previously in no position to offer credible advice.

I’ll be interested to see how long it takes for this notion to penetrate the U.S. media. I think that the big media that dominate the dialog and the vendors they serve have a vested interest in clinging to Tapscott & Prensky’s anthropological myth-making. People and companies spend big bucks on the extraordinary. Everyday utensils don’t command a price premium.