ReadWriteWeb does a periodic analysis of the all-time top 10 YouTube videos (by the simple metric of number of views). As reported on the site with its latest summary (June, 2014):

We first did this list in August 2007, at which point Evolution of Dance by comedian Judson Laipply was number 1 with nearly 56 million views. The next update was September 2008, when Avril Lavigne’s Girlfriend pop music video was number 1 with 103 million page views (although commenters argued that it may have gamed the system). In January 2010, Charlie bit my finger – again! was number 1, with 148 million views.

(June 2010) Our latest update shows that Lady Gaga has made a big impact in 2010 on YouTube, with 2 entries into the top 10 — including the number 1 video of all time! Perhaps a sign of the times that she shunted Susan Boyle out of the top 10.

I take note that the top 10 list includes 6 music videos, 2 male comedian videos and 2 cute baby videos. Lady Gaga’s Bad Romance gained the top spot according to ReadWriteWeb with 217,720,898 views. I just checked YouTube and in two weeks it has gained over 20 million additional views. I’d never realized that clicking on the view number provides a drop-down mini-analytic chart that illustrates the time period of the video’s ascendancy and some key demographics. 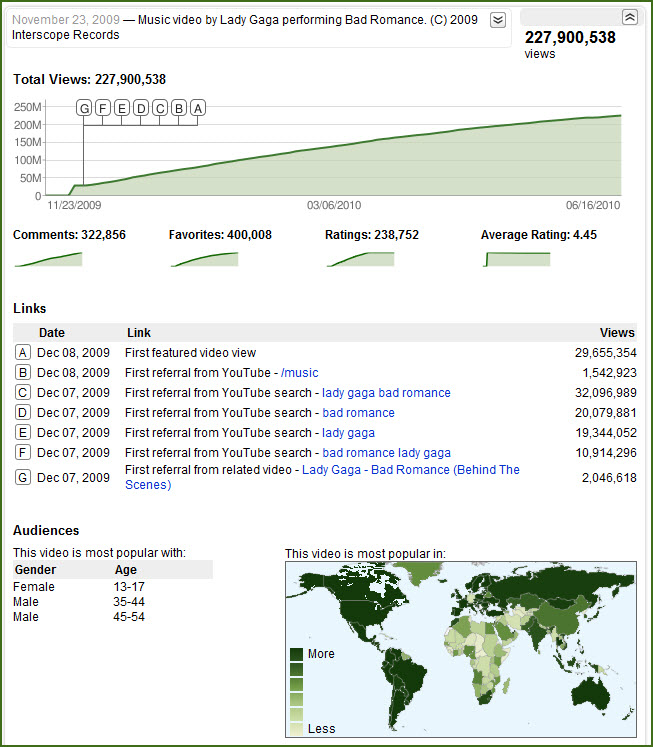 Laga Gaga has risen quickly — less than six months have passed since the video first posted. By contrast, the #2 video Charlie bit my finger – again! first debuted in May, 2007.

On the other hand, it may well remain on the charts well after Lada Gaga gags.