As Bob Sacks points out in one of his three newsletters this evening:

Can there be anything more ridiculous than a survey about what people will do with a product that hasn’t yet been delivered?  All this hype is getting to me.  The Apple hype machine once again has my complete respect.  As I’ve stated before, I’m already on the list and ordered mine early.  My excuse is one of professional necessity.  If I’m going to predict the future, it sure makes sense to continually be part of it.  What’s your excuse?

He’s referring to an article published under tomorrow’s date on Apple Insider. Surveyed were 2,443 adults with a mobile phone, 770 of which own smartphones. And, as it turns out, this is an extremely prescient group! 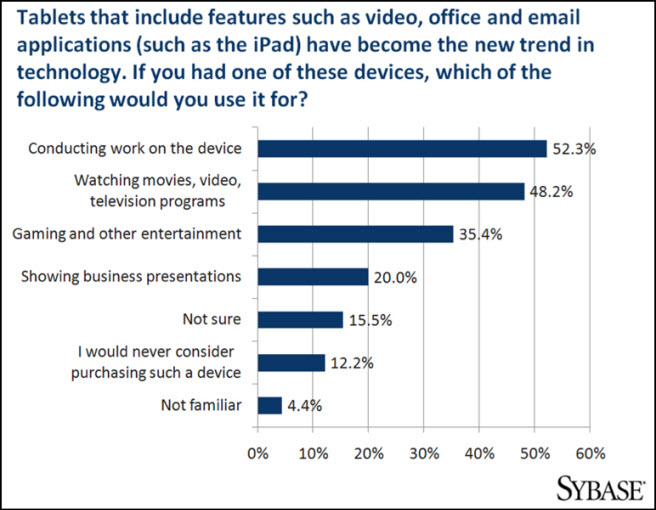 Adding to Bob’s questioning above, I wonder how something that does not exist can be referred to as a “trend.” Oh well, precise use of language has never been a strong point among technologists.

As you can see above, 12.2% disqualified themselves altogether by stating that they “would never consider purchasing such a device.” Party poopers. Another 4.4% have been living in the deepest Amazon jungle for several months and have let Steve Jobs down by not knowing what an iPad is. Shame on them.

Based on the phrasing of the question, apparently 15.5 % of those surveyed do plan to purchase an iPad without any idea of what they’ll use it for. Discretionary income put to good use.

The rest intend to use it for tasks they can already perform on existing computing hardware. Very creative.

I think I’ll just drop this warm potato right here. It speaks so eloquently for itself.

Update, March 30/2010: MediaPostNews Online Media Daily has found another survey (from a firm named “PriceGrabber“) that boldly predicts that of the 34% of those surveyed who intend to buy an eReader of some sort next year, 59% will choose the Apple iPad versus 35% who will choose a Kindle, and half that percentage the “Sony Reader” (presumably all models from Apple, Amazon and Sony are included). 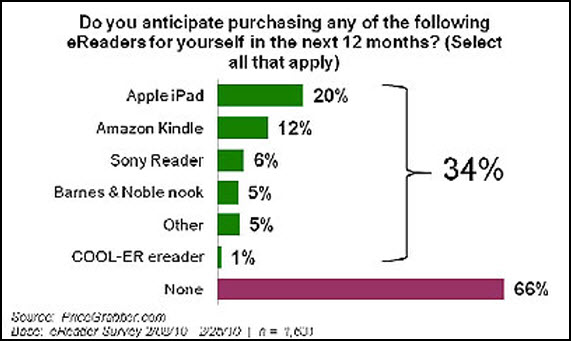 But this cross-section of the American public demonstrate that it has not done ALL of its homework. As the article points out:

Focusing on the e-reader market, the PriceGrabber study found that four of five consumers want to pay less than $250 for such a device. Since that would rule out the iPad, which sells for $500 at the lowest price, either people aren’t aware of what the Apple tablet costs or they are willing to pay more for its versatility. The average price of the  top 10 eReaders on PriceGrabber.com is $241.